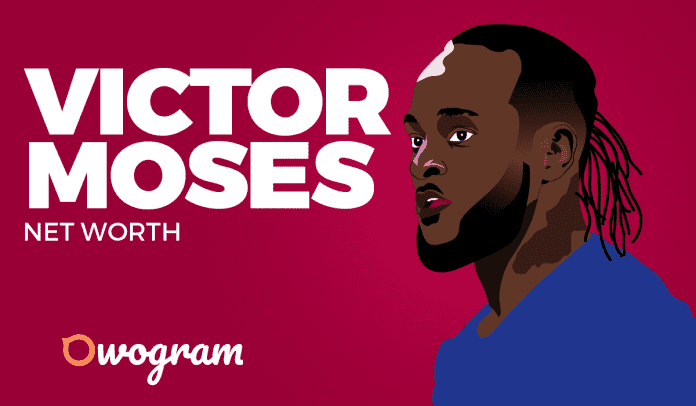 How much is Victor Moses net worth?

Victor Moses is a Nigerian professional footballer and one of the many top stars which has been produced in the country.

Despite starting out his football career as a right-winger, Victor found his best position as a wing-back on the football pitch. It was in this position that he established himself as one of the finest wingbacks in the English Premier League.

Till date, he has recorded a lot of career highs which has helped his reputation as a star footballer which not many Nigerian footballers enjoy. It is why football fans cannot but wonder what Victor Moses net worth truly is.

Throughout his career, Victor Moses has experienced highs and lows, which is characteristic of any footballer today. Although he is not one of the richest footballers in Nigeria, his net worth is worth talking about.

However, through hard work and dedication to doing what he loves most, he was able to carve a wonderful career out of football. This has brought him riches, as well as glory from winning famed trophies and awards.

In this article, we will explore Victor Moses net worth, which he has accrued in his career over the years.

Victor Moses was born to his parents who were Christian missionaries in Lagos, Nigeria. The childhood of Moses was a unique one, as the occupation of his parents meant he had to travel a lot to help his parents grow their ministry.

Along the line, his parents met their death in Kaduna while going about their daily activities as a missionary. This happened during the religious riots which were staged against the Christians in the state at the time.

The death of his parents struck a huge blow to Moses, who was hidden away from the agitators by his friends. Soon enough, Moses was sent the UK to claim asylum, in a travel that was sponsored by his relatives at the time. It was in UK that he found a foster family to stay with.

While with his foster family, he attended the Stanley Technical High School (now known as the Harris Academy) in South Norwood.

Moses played football during extracurricular activities and was soon spotted by scouts from Crystal Palace which was just a stone throw away from his school.

He impressed the scouts of the football club, and that was how his football journey began to unfold.

After spending a few years at the Crystal Palace academy, he came through the ranks to join the first team in 2007 in a 1-1 draw against Cardiff city in the championship.

After impressing with the few chances he was afforded, he sealed a first-team place and subsequently scored his debut goal for the club in a 1-1 draw against West Bromwich Albion.

Throughout the 2007-08 season, Moses featured in a total of 16 games for the club after helping them reach the championship playoffs. His wonderful displays on the wings earned him a new contract for four years.

The following season at the club, he only scored 2 goals in 32 appearances, which was quite disappointing, considering the huge expectations placed on him.

In the 2009-10 season, he was in blistering form, which saw him score 6 goals in eight games. However, with the club struggling with its finances, he had to move on to Wigan Athletic.

Moses made his deadline day move to Wigan Athletic in a  £2.5 million, much to the excitement of Wigan fans.

His first appearance for the club came on the 6th of February, 2010 in a league match against Sunderland. His first season at his new club was quite the average, as he struggled to find the spark.

Moses also started his second season on a bad note, as he was ravaged with injuries. This meant that Moses struggled to force his way into the starting 11 of the team at that point. His first goal came in a 1–0 win against West Bromwich Albion.

He was soon given the opportunity to show what he’s got after the departure of Charles N’Zogbia in the 2011-12 season.

After impressing at Wigan, Moses turned the head of many big clubs in the English Premier league. He turned the heads of the likes of Chelsea and Liverpool.

This prompted bids from Chelsea, and after meeting the asking price of the club, Chelsea was allowed to speak with the player. He moved subsequently to Chelsea, one of the clubs in the best football leagues in the world, and Victor Moses net worth improved exponentially. His first appearance came against local rivals, QPR in a league game in September.

His full debut for the club came against Wolverhampton Wanderers and scored his first goal after 71 minutes in a game that finished 6–0 to the Blues. His debut champion league game came against Nordsjælland. Moses due to his impressive performance was handed the man of the match award in a league cup game against bitter rivals, Manchester united. The match ended 5-4 in favor of Chelsea football club.

Moses scored his first league goal for Chelsea in a 1-1 draw against Swansea city. He followed up with another in the Champions league against Shaktar Donetsk. In January 2013, Moses scored in the FA Cup third round against Southampton, coming from behind to secure a 1-5 victory over the saints. He also scored his first Europa league goal in a 3–1 home win against Rubin Kazan, and then his second in the reverse fixture a week later.

The following season, Moses was loaned to Liverpool after failing to impress, given the chances he had to do so at Chelsea. Liverpool was an opportunity to have a fresh start and show what he’s got. Victor Moses net worth was not affected by this move, as he was still on the same contract he had at Chelsea.

He immediately made an impact on his debut for the club by scoring a goal in a 2-2 draw against Swansea city. He followed up with another goal against Bournemouth in a 2-0 victory in the FA Cup.

However, opportunities were hard to come by due to the form of Raheem Sterling. This limited him to just 22 appearances for the club throughout the season.

Moses soon made another loan move to Stoke city in the 2014-15 season while still a Chelsea player.

His first league appearance came in a 1-0 win against giants, Manchester City. His first goal for the club came in a 2-2 draw against West Ham United in the league.

He suffered another setback due to a thigh injury which Limited his game time, after being out for 8 weeks. He returned to the team afterward in a league match against Leicester City.

He then went on another loan spell that would have no bearing of Victor Moser net worth. Due to the success recorded during his loan at Stoke city, He spent the first half of the following season at Chelsea, but without having much impact in the team. This led to his move to West Ham the following season.

A new coach at Chelsea means a fresh start for Victor Moses under Antonio Conte. The new coach was impressed with Moses work ethic, and was soon moved to the wing back position which he was not so familiar with.

Surprisingly, Moses impressed in this role. His first game on his return to Chelsea was marked with a win, after replacing Hazard in a 2-1 win against West Ham united. His first start and first goal also came in a 3-2 win against Bristol Rovers in the EFL cup.

The a 3–4–3 formation employed by Conte favored Victor Moses being played on the wing back, and he enjoyed a lot of playing time while in this position.

He was a man of the match in a 2-0 league victory against Hull city. His marauding runs on the wing were effective and efficient in breaking down opposition teams in a split second. Through that season, Moses scored four goals as he helped Chelsea clinch the English Premier division.

As his contract neared its end at Chelsea, Moses signed for the Turkish outfit, Fenerbache. This deal saw an increase in Victor Moser net worth in a deal that ran for only 18 months. He has played with many of the richest footballers in the world.

His time at Fenerbache was not to last, as he was signed by Inter Milan who were coached by Antonio Conte. He made impressive displays at Inter Milan, but Financial restraint at Inter means his services could not be retained by the Club.

Victor Moses soon moved to Spartak Moscow on another season-long loan with an option to buy. Victor Moses net worth is estimated to be about $25 million.

How Victor Moses Spends His Money

Victor Moses net worth means he is able to afford a luxurious lifestyle. Considering the huge salaries he his paid through football, it is rather strange not to live a luxurious life, as he can afford almost anything he wants.

He also owns a huge 6 bedroom mansion at Lekki in Lagos State. The home equipped with state of a art gym, swimming pool, and many tech gadgets and supports is estimated to be worth around N250 million.

That is such a huge amount of money, but guess what, it’s not even up to 10% of Victor Moses net worth. How amazing!

In one of Victor Moses quotes, he said; “I have always believed in myself. As a footballer, it is essential to have that belief.” – Victor Moses

Summary of Victor Moses Net Worth

Despite having it hard in his early days, Victor Moses strive constantly to build a successful career for himself.

Victor Moses’s worth today is everything to show for his hard word, dedication and professionalism in doing what he loves.

While most of his riches are afforded him through football, it should be noted that without putting in the necessary work, Victor Moses net worth wouldn’t be what it is today.

We have all seen many footballer fail in their quest to build a successful career in football due to their inability to be consistent and put in the Gard work.

Victor knew what he wanted, how he was going to get it, and he went straight for it. Today, Victor is enviable for many rising footballers. Definitely an inspiration.