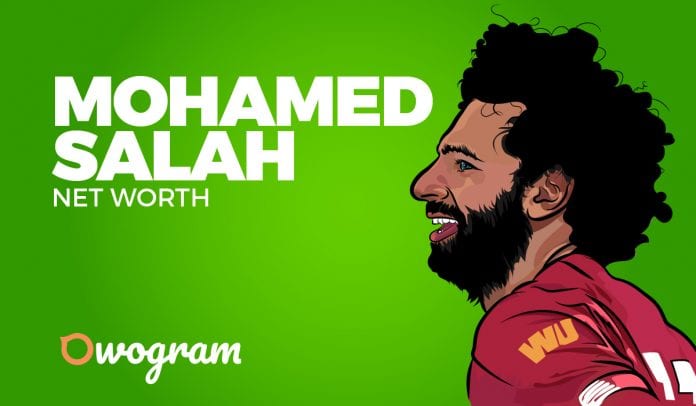 How much is Mohamed Salah net worth?

Mohamed Salah is a professional football player from Egypt. He is considered one of the best players in the world and known for his finishing, dribbling, and speed.

Mohamed Salah is becoming one of the world’s greatest forwards who plays as a striker for Liverpool FC of the English Premier League – one of the best football leagues in the world. He also plays for the Egyptian National Team.

This article gives information about Mohamed Salah net worth and background, career, endorsements and investments and many others.

As of today, Mohamed Salah is worth an estimated $70 Million dollars.

Apart from his salaries and earnings, he has quite a list of sponsors.

Salah currently earns a total of $12m (£9m) from endorsements. He currently has a sponsorship deal with Vodafone, alongside a multi-year boot contract with Adidas, for whom he also features in advertisements.

Today, Salah takes a top spot on the list of Liverpool players salaries.

Mohamed Salah (or known as Mo Salah by fans) was born on June 15, 1992, in Nagrig, Gharbia, Egypt. He was born into a family that loved sports.

Although Salah was a youngster who loved sport, he wasn’t academically endowed. Knowing he couldn’t succeed in academics, he pursued his interest in football and then turned out to be the best decision of his life.

His football exploits soon earned him a spot in a club in Egypt, El Mokawloon.

Mohamed Salah net worth and value have been increasing ever since then, and the amount of wealth that Salah has gathered over the past years is a lot. As of today, Mohamed Salah is worth millions of dollars.

Mohamed Salah started his football career with El Mokawloon in May 2010. After spending time in the youth system of El Mokawloon, he got featured in the club’s first team in the Egyptian Premier League.

He spent two years as a senior player in El Mokawloon before moving to Switzerland club, Basel.

After winning the Swiss Superleague twice at the end of two seasons at Basel, he moved to Chelsea in January 2014 for about ₤11 million.

While at Roma, he was awarded the club’s Player of the Season award and also emerged as Roma’s top scorer for the season.

In June 2017, Salah moved to Liverpool for about ₤42 million, where he signed a five-year contract. His first season at Liverpool was a huge success. He emerged as the league top scorer in the top five prestigious leagues in Europe.

Although he is not one of the most paid players in EPL, Mohamed Salah net worth cannot be overemphasized as he earns a huge salary every week.

How Mohamed Salah Spends His Money

Mohamed Salah net worth has been increasing over the years and he has gathered a lot of wealth over the past few years.

He is currently the highest-paid player in Liverpool with a salary worth of ₤200,000 per week. He also earns $165,000 per Instagram post.

Mohamed Salah’s wealth is evidenced by his hard work and consistency so he can afford to live a luxurious lifestyle. However, he chose to live in a modest home with his wife and beautiful daughter.

In one of our favorite Mohamed Salah quotes and sayings, he said; “I always try to see my weakness, work on it, to be better as a person and a player, everything.” – Mohamed Salah

You will never get to a place if you refuse to take the first step. Starting is one way to getting to a destination.

Many have refused to start because of fear of failure and insecurity but you may never know what comes your way if you refuse to start.

Mohamed Salah net worth wouldn’t be a topic today if he hadn’t worked on his dream and bring it to reality. He grasped the opportunity and became one of the richest football players in Africa.

You are who you are. You are different from others by your skills and potentials; embrace it and seek to be better day-after-day.

Mohamed Salah is known for his outstanding skills and potentials. He strengthens his weakness and evolves his strong suit.

To achieve an outstanding success, you have to set goals and objectives, this will help you to know what you are aiming for.

Salah has the vision to help the Egyptian National Football team to qualify for the World Cup in Russia 2018 and he attained it. Furthermore, he doesn’t settle for less, he keeps aspiring for more.

Summary of Mohammed Salah Net Worth

The major source of Mohamed Salah net worth is from his career as a professional footballer.

His total earnings for a 12-month period is estimated at 35.1 million with his salary and winnings accounting for 23.1 million and 12 million from endorsement deals.