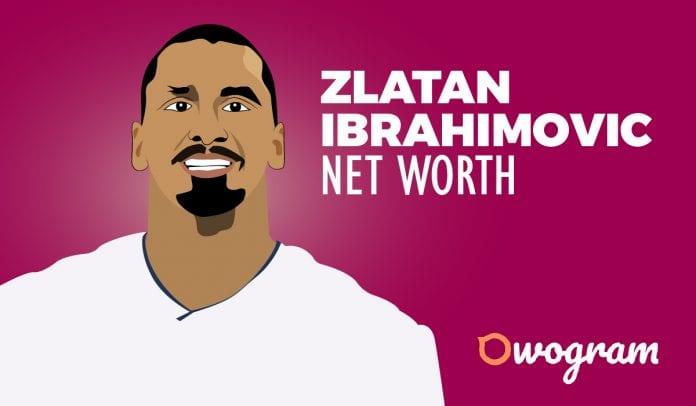 What is Zlatan Ibrahimovic net worth?

Zlatan Ibrahimovic’s net worth and salary is one of the highest in the football world, being one of the best strikers and successful footballers.

Ibrahimovic is one of the prolific figures in the football world who has played for some of the biggest clubs in the world which includes A.C Millan, Barcelona, PSG and Manchester United.

He has also played in Sweden, Netherlands, Italy, Spain, France, England and the USA.

He has his unique style of playing which sets him apart from his other contemporaries which has earned him to be the countries all-time leading goal scorer.

No doubt, Zlatan is one of the top 20 richest footballers in the world alive and his net worth is prove of this.

Amazingly, this article is providing you with details of Zlatan Ibrahimovic’s net worth, background, career, highlights, and some of his life philosophy.

Zlatan Ibrahimovic was born on 3rd October, 1981 in Malmo, Sweden.

His father, Sefik Ibrahimovic hails from a Muslim Bosniak family, while his mother, Jurka Gravich is from a Croatian Catholic background.

Ibrahimovic’s interest in football had been from a very tender age. He had started playing at the age of six in the local junior clubs.

At 15 years, he was close to quitting football as a result of his parents’ divorce but his coach convinced him to keep playing.

Not long after he started his football career, he became a regular in the regional club, “Malmo FF”. Soon after, he began to walk through his success path.

Ibrahimovic is married to Helena Seger with two children, Vincent and Maximilian Ibrahimovic.

Let’s go into the full details of Zlatan Ibrahimovic net worth and professional career.

Zlatan Ibrahimovic started his football career with Malmo FF in 1999. Malmo finished 13th in the league and were relegated to the second division that season, but returned to the top flight the next season.

Arsene Wenger tried to persuade him to join Arsenal but he never did that, instead, he went on to join “Ajax” and then moved to Amsterdam.

At Ajax, he developed a reputation as a temperamental player, though honed his formidable skills as part of two title-winning teams. No doubt, Zlatan Ibrahimovic net worth has started to climb.

After four years with Ajax, Ibrahimovic transferred to Juventus F.C, one of the richest football clubs in the world today, and led the Italian club to two Serie A championships.

There were some controversies that developed at Juventus which led his force transfer to A.C. Milan where he won three straight Serie A titles and claimed his first league scoring crown in 2009.

Later in 2009, he got traded to F.C. Barcelona for Samuel Eto’o, and starred for a loaded club that rolled to a league title and Super Cup victories. He played two seasons with the club, in his second season, he was the Serie A “Top Goal Scorer”.

In 2012, he joined “PSG”, the leading French football club, where he played four seasons and then moved to play in the English Premier League for Manchester United.

He moved to Manchester United in 2016 and helped the English club win the 2017 UEFA Europa League Final.

In 23rd March 2018, the veteran player’s contract got terminated, allowing him to join the L.A Galaxy in the U.S.

He has also played internationally for the Swedish national team and has recorded lots of successes and has been awarded on several wins.

Zlatan Ibrahimovic has endorsed numerously with some companies like Nike, Nivea, Volvo, Microsoft Xbox. His estimated earnings on endorsement deals is over $6 million.

As a footballer, he earns over $30 million. With high endorsement deals, Zlatan Ibrahimovic net worth is undoubtedly on a very high side.

Ibrahimovic owns a house in Manchester which costs a whopping $6 million and also has some other properties in his native country, Sweden.

Talking about Zlatan Ibrahimovic’s net worth, the estimated value of his luxury cars amounts to #3 million. He has brands like Ferrari, Lamborghini, Mercedes, and Volvo.

The net worth of Zlatan Ibrahimovic also includes the worth of his personal investments which is estimated at $110 million.

Ibrahimovic Net Worth and Highlights

As of 2020, Ibrahimovic net worth is estimated to be roughly $250 Million dollars.

Zlatan Ibrahimovic net worth is one of the highest in the football club, having lots of successes and awards to himself. Some of his personal awards are:

Zlatan has achieve a lot. In one of the 40 best Zlatan Ibrahimovic quotes, he said “I decide my future. I decide what I want to do. Nobody else”.

Zlatan has come a long way, he has seen it all. What can you learn from him?

Whatever happens, happens for a purpose. You can’t change what has happened but you can avoid what will happen. Forget the past and move on to a better future.

Like Ibrahimovic said, “Anything that happens in your life was meant to happen. It is your destiny. I was destined to have the life I have now, and I can’t have any regrets”.

Be Confident of Yourself

Ibrahimovic was termed to be one of the best players in the world because he was confident of himself.

He never saw himself as being incapable, but then, whenever he is on the pitch, he looks forward to having a goal.

Be At Your Best

There is no excuse for failure. Be the best at what you’re good at.

Just keep doing what you are best at and one day you will reach your goal no matter what anyone thinks of you or what life throws at you.

Summary of Zlatan Ibrahimovic Net Worth

Interestingly, Ibrahimovic is one of the most decorated active footballers in the world having successfully won 32 trophies in his career.

As of 2020, Zlatan Ibrahimovic net worth is estimated to be $250 Million

What do you think? Let’s have your comments.