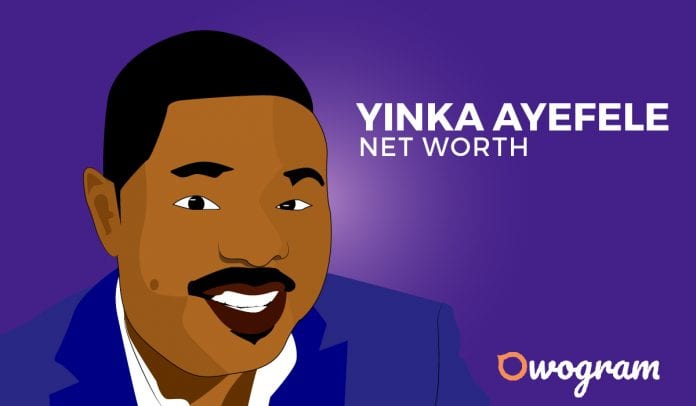 How much is Yinka Ayefele net worth

Yinka Ayefele is a talented Nigerian gospel musician, songwriter, radio personality, and producer. His music is a peculiar blend of gospel Fuji and afro juju beats.

He has released a great number of albums since his music career began and his songs are usually delivered in Yoruba.

It would seem any ceremonial gathering of people is incomplete without his music being played.

Although, Yinka Ayefele is not listed as one of the 10 most richest musicians in Nigeria, his net worth is one big topics of interest among his fans.

As of today, Yinka Ayefele net worth is estimated at $5 million. Yinka Ayefele has won several awards both locally and internationally. Some of his awards include:

Olayinka Joel Ayefele, popularly known by his stage name Yinka Ayefele, was born on 1st February 1968. He is a native of Ipoti a town located in Ekiti State, one of the state and capital in Nigeria.

He had his primary and secondary school education in Ekiti State. He went further to attend the Ondo State College of Arts and Science located in Ikare-Akoko Ondo State.

After school, he searched for banking job to no avail. He then joined the Federal radio Corporation Nigeria, where he worked as a presenter.

He was also producing jingles while honing his radio presenting skills.

Yinka got involved in a ghastly motor accident that affected his spinal cord in December, 1997.

In a bid to raise funds for treatment overseas, he ventured into music on the advice of friends who recognised that he was a talented singer.

Prior to that, Yinka had been the leader of his church choir, and knew how to play several musical instruments.

Yinka is married to Temitope Titilope. He met Temitope before the accident that resulted in the spinal cord injury, and they tied the knot in 2000. On 18th January, 2019, the couple welcomed a set of triplets.

Yinka Ayefele started music when he was in secondary school. He used to be a member of the Boys Brigades in his hometown where he plays the trumpet. He started playing guitar when he was in the choir.

He disclosed in an interview that that music wasn’t his childhood ambition because he didn’t really plan to become a musician. His craving career was to become a banker or work in a firm as a clerk.

He later worked as a journalist and broadcaster at the Federal Radio Corporation of Nigeria, Ibadan and producing jingles and musical works on radio.

His professional music career came into play in 1997 after involving in a ghastly and sad automobile accident on his way to a radio function which damaged his spinal cord and denied him the chance of ever walking again.

He turned out to be the only survivor out of many victims who were brought along with him to the hospital. The accident left him confined to a wheel chair as a result of the spinal cord injury. During these times, Yinka Ayefele net worth hasn’t gained momentum.

He was in the hospital for about nine months receiving medical attention. This changed his life both positively and negatively after which he then started music professional and he suddenly became a household name.

His songs are a blend of Gospel, Juju, Fuji and sometimes Makossa beats.

His experience and advice of friends while he was still in the hospital; inspired and eventually led him into releasing his first album titled “Bitter Experience” in 1998 and since then he has released over twenty albums.

His first album brought him to limelight and no doubt, Yinka Ayefele net worth became a topic of interest ever since.

You can visit any of these best Nigerian music websites to download Yinka Ayefele songs.

He has a band with which he performs at live events and concerts. It is a famous and highly sought-after band, they are known to perform at various occasions on a weekly basis.

Ayefele’s music has been able to transcend the religious barrier as his songs are widely loved by both the Christian and Muslim population. He also has a solid fan base made up of Christian folks and Muslims alike.

He has a mansion in Ibadan which houses his music studio as well as his radio station, Fresh F.M. the building which was previously under construction is said to be worth over N800 million. Another branch of the radio stations is located in Ogun State.

He is the creator of merry makers band where he is said to love and appreciate each member of the band equally as they each have special and unique roles they play.

He also has a Non-Governmental Organization (NGO) which kicked off in 2009 launched in honour of his birthday. The organization is known as the “Yinka Ayefele Foundation”.

He was awarded an honorary membership by former President Goodluck Jonathan in the “Order of the Niger”.

Amazingly, putting all his achievements, endorsement deals, buildings, and properties into consideration, Yinka Ayefele net worth will not be misestimated as he has achieved a lifetime of fortune.

There seem to be many common questions about the man who can’t walk but has move around the world.

What is the real name of Yinka Ayefele?

What year the Yinka Ayefele Crash?

Yinka Ayelefe suffered the tragic incident on December 12, 1997, which left him incapacitated but he has not let his disability stopped him from working for God as he continues to make strides in his Gospel career.

No. He can’t with his two legs. But with technology, using a “Power Wheelchair”, Ayefele can now move smoothly from standing to sitting to lying down. Yinka can also travels at 5 miles an hour — which is a good walking pace. He will have precise control over the wheelchair through the graphic Display Controller operated by a joystick.

How Much Did Davido Give Yinka Ayefele?

Davido has gifted Yinka Ayefele, Nigerian music producer and gospel singer, the sum of one million naira. The ‘OBO’ crooner was spotted together with Ayefele on stage at an event in Abeokuta, Ogun State, on Friday, April 9, 2021.

It is no doubt that Yinka Ayefele’s style of music is different from other gospel music.

Yinka Ayefele sings Gospel Tungba, a fusion of gospel with a high percussion beat. The style which is unique and attracts diverse audience: Christians, Muslims and Pagan alike.

Yinka Ayefele, despite being on the wheel chair, has made so much out of life. He never saw his predicament as a challenge, but instead, he came out to be better and to give hope to people around them.

If he had taken his situation as an excuse to failure, we all wouldn’t have been talking about Yinka Ayefele net worth today.

There’s always a light at the end of the tunnel. Yinka Ayefele is an incurable optimist who believes nothing is impossible. He believes he will still walk again.

Our minds and thoughts are powerful, we must always be positive.

Summary of Yinka Ayefele Net Worth

After passing through all life’s struggles and challenges, he came out stronger and more successful. He is indeed an achiever.

He believed in whom he served and he held on to his faith and he was never disappointed. Also, with millions of fans scattered around the globe, Ayefele is a musician enjoying both fame and fortune.

Having spent so much on his health challenge, Yinka Ayefele net worth is still one of those to be mentioned.

Jamo Pyper net worth and biography