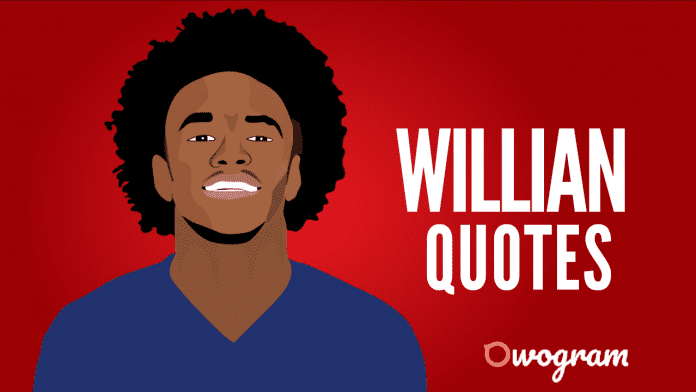 We bring to you 50 powerful Willian quotes about soccer and life.

Willian is a Brazilian professional footballer who started his career at Corinthians and played for his youth club.

He has played as a winger or as an attacking midfielder in the Premier League for Chelsea, Arsenal and Brazil national team.

Willian has been signed into big and high endorsement deals. He endorses with Xbox and Nike and also a Brazilian soft drink brand, Guarana Antarctica naming a high rise on Willian net worth.

How did he make it this far? What are he’s ideologies? We bring to you Willian quotes about soccer and success.

1. “Always, I say that I want to stay at Chelsea as long as possible, and I am happy to stay here”. – Willian

2. “It’s always good to reach a final and fight for titles”. – Willian

3. “I’ve won titles and I have the fans’ affection too. I intend to continue until the end of my contract, to renew and to continue for more years”. – Willian

4. “I like the Premier League. I like Chelsea. My dream was to play for Chelsea, so it’s a dream come true”. – Willian quotes

5. “The World Cup is a tournament that practically does not allow errors, especially in the final”. – Willian

6. “Both sides of the game, defensively and offensively, are important”. – Willian

7. “Ronaldinho is the biggest idol in football for me. I like him a lot”. – Willian

8. “We always enter competitions to win but things don’t always happen the way we want”. – Willian

9. “To win the Premier League is not easy”. – Willian quotes

10. “It is totally different to play in the Premier League to the Champions League”. – Willian

11. “When you win, you win together and when you lose, you lose together”. – Willian

12. “I started to play at four years. I went to Corinthians at nine years old. Then, it started to become more serious”. – Willian

15. “My parents gave everything. They sacrificed, they went to work. Sometimes, they worked 24 hours, so they called friends to help us. They did everything for me to become a football player”. – Willian

17. “Loyalty and honesty, those are important”. – Willian

18. “We learn so much from difficulties”. – Willian quotes

19. “For me, Conte was a manager very difficult to work with. His philosophy, his way of dealing with things is very complicated. There were a few games… Sometimes we just don’t understand. You’re playing very well, then you get substituted. I do not understand”. – Willian

20. “On the pitch, we tend to forget the things that happen off the field. I try to focus a lot on what I’m doing”. – Willian

21. “When Chelsea goes into a competition, we go to win”. – Willian

22. “I have to continue to train hard and when I have time to play I have to play well”. – Willian

25. “I think every player thinks in a different way”. – Willian

26. “Messi, Neymar or Ranaldo? The three of them are exceptional, they have a lot of quality and they have their differences”.

27. “To play for Chelsea, you have to put your mind to winning titles every year”. – Willian

28. “Always when I play, I want to play well and make a difference”. – Willian

29. “I don’t know how I can explain that moment. But it was the best moment I think in my life when I signed with Chelsea because it was my dream comes true”. – Willian

31. “I think that for a player to develop fully on the pitch he needs to be happy”. – Willian

32. “The World Cup is the ultimate moment for any player. It is the opportunity to defend your country in the biggest tournament in the world and the moment the whole world will watch you play”. – Willian quotes

33. “It doesn’t matter what the game is or against who, it is good to play at home”. – Willian

34. “I kept an eye on Chelsea’s fortunes after they first tried to sign me”. – Willian

35. “Every professional has their way of working”. – Willian

36. “I am very proud to stay and be a Chelsea player. It is an honour to play at this club”. – Willian

37. “All that players can do is to win as many titles as possible”. – Willian

39. “I believe everything starts from scratch when changing a coach”. – Willian quotes

40. “It was my dream to have an opportunity to play in a big league like the English League”. – Willian

41. “I think Chelsea is Chelsea. No matter the players we have, we have to fight until the end in every competition”.

42. “I always want to feel happy, whether I am with my family or out on the football field for Chelsea”. – Willian

44. “There is no doubt English football is very big, with huge visibility”. – Willian quotes

45. “I really like living in London. It is a charming city, where everything happens and there are lots to do. There is a very good quality of life here”. – Willian

46. “It’s difficult when you start to play football. My boots were much worse”. – Willian

47. “Every game, we have to seek to play better if we want to achieve results”. – Willian

We hope you’ve enjoyed this collection of Willian quotes about soccer, life, and success? Let us know which of these sayings by Willian impresses you the most.