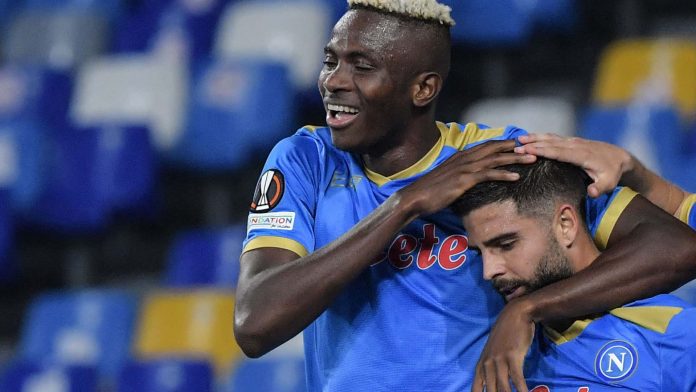 Victor Osimhen, who is one of the Nigerian footballers making wave, and his Napoli side will emerge as champions of the 2021-22 Serie A title, according to a large portion of Goal readers.

After a fifth-place finish last season, the Parthenopeans have commenced the ongoing campaign on an awesome note.

Unbeaten in all nine league games played so far, the Naples based team occupies the second position behind leaders AC Milan having accrued 25 points – with a game less.

For their Nigerian import, Osimhen, he has contributed five goals in the eight matches he has featured in so far.

As Luciano Spalletti’s side prepare to square up against Bologna – where victory would see them overtake the Red and Blacks – we asked our readers if the Nigerian and his team would walk home with the winners’ title at the end of the season.

In a poll conducted on the Goal Africa Twitter handle, a massive 74.1 percent of total votes believes the Stadio Diego Armando Maradona giants will beat the likes of AC Milan, Inter Milan, and Juventus to the Serie A title.

This is understandable judging by their recent form so far. Should that happen, that would see them win the prize for the third time in their history.

On the other hand, 25.9 percent do not believe in the ability of Spalletti’s men to achieve that feat.

Napoli last won the league during the 1989–90 season – where they pipped Milan to the trophy by just two points while Inter and Juventus occupied the third and fourth positions respectively.

In a recent interview, Osimhen expressed his desire to help the Italians win silverware after failing to impress in his maiden season with the club.

“The club always believed in me, starting with these two goals is certainly important and I want to continue like this,” he told Sky Sport Italia.

“I have everything to give to Napoli, I want to stay healthy, avoid injuries, and one step at a time we can together achieve our targets.”

Napoli take on Bologna on Thursday evening before traveling to Stadio Arechi for a date with Salernitana on October 31.

Thiago’s Running the Show! How Midfielder’s Re-Emergence Has Put Liverpool Back In the Title Race