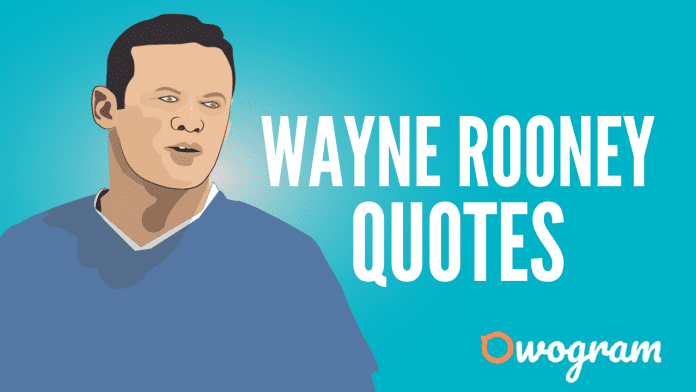 We bring to you 15 interesting Wayne Rooney Quotes about soccer, determination, hard work and success.

Wayne Rooney is a Manchester United legend and spent the majority of his career at the club until he returned to his boyhood club, Everton.

Before leaving, however, Rooney won everything a footballer can win at club level from the English premier league to the Champions League.

With all these achievements, it is expected that Wayne Rooney net worth will be massive. But how did Rooney make it this far? What are his principles, ideologies, and philosophies?

We share with you interesting Wayne Rooney quotes about life, soccer, determination, and success.

1. “There are many ways to grow football-wise. You go slow or are pushed to go faster, otherwise, you get left behind. For me, there would be trouble in stopping learning. – Wayne Rooney

2. “Becoming a dad means you have to be a role model for your son and be someone he can look up to. – Wayne Rooney quotes

3. “I don’t think I look up to any players. Obviously, you respect everyone. – Wayne Rooney

4. “Becoming a dad was the proudest moment of my life. Playing football does not even compare. – Wayne Rooney

5. “Nice to see your home fans boo you. That’s what loyal support is. – Wayne Rooney

Related: 72 Quotes by Alex Iwobi about soccer and life

6. “When famous people come up to you it’s a bit weird, but it’s an honour, really, when they recognise you and want to chat with you for a bit. – Wayne Rooney

7. “I just hate losing and that gives you an extra determination to work harder. – Wayne Rooney quotes

8. “Just to confirm to all my followers I have had a hair transplant. I was going bald at 25 why not. – Wayne Rooney

9. “You can learn more from the lows than the highs. The highs are great but the lows make you really look at things in a different way and want to improve. Every player will have both in their careers and I have, but what you get is that experience which is so important to perform at your best. – Wayne Rooney

10. “Football is made up of all kinds of conflict. In a dressing room, between players, between us and the manager, between us and loads of people who don’t seem to matter. It’s constant and harsh sometimes. – Wayne Rooney

Related: 40 quotes by Zlatan Ibrahimovic about soccer and life

12. “I grew up an Everton fan, my whole family are Everton fans and I grew up hating Liverpool. And that hasn’t changed. – Wayne Rooney

13. “When you are 16 there is no fear whatsoever. As you get older you play in more important games and that is when you start thinking about what will happen if you win or lose. – Wayne Rooney

14. “When I was younger, I used to visualise myself scoring wonder goals, stuff like that.” – Wayne Rooney

Thanks for checking out this collection of Wayne Rooney quotes! Don’t forget to like and share them on social media.