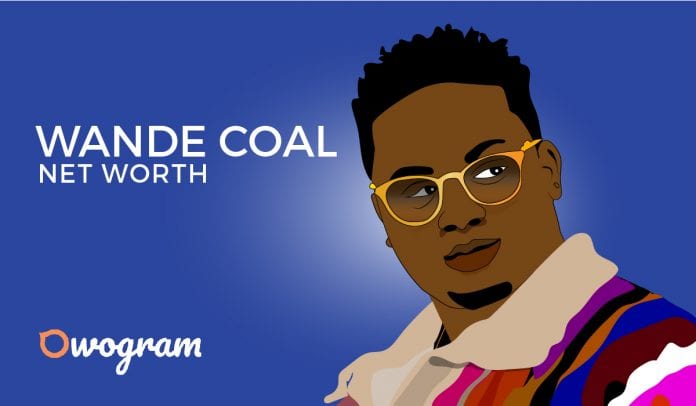 How much is Wande Coal net worth?

Speaking of some of the most iconic figures who have graced the Nigerian music industry, Wande Coal is a name not too Far from the thinking of Nigerian music lovers.

Having spent more than a decade in the Nigerian music industry, he has built a portfolio that many upcoming young guns in music would envy and desire.

Since we all consider music in Nigeria to be a very lucrative venture, especially when such an artist is talented, Wande Coal net worth is easily an interesting topic among his fans.

Wande Coal’s net worth is expected to be high due to his longevity, talent, versatility, and many other properties that set him aside as a top figure in the music industry today.

Although he is not one of the top ten richest musicians in Nigeria, most popular artists who meet Wande Coal in the music industry refer to him as a legend, and rightfully so.

These comments highlight the huge impact which Wande Coal has had on the industry to date. This article will explore Wande Coal net worth, for curious minds and fans who can’t just but wonder just how rich this legend is.

Wande Coal is one of the most revered superstar artistes in Nigeria.

He is a typical Lagosian as he was born on the island to his parents, Chief Ibukun Olufunto and Omolara Oluwayemisi Ojosipe. Wande Coal has just a sibling who is his junior.

Wande Coal had his primary education at Staff Nursery and Ijaniki Primary School, while his secondary education was overtaken at the popular Federal Government College Lagos in Lagos State.

This school also produced Don Jazzy as one of its graduates, someone Wande formed a music group with in later years.

Wande’s tertiary education was at the University of Lagos (Unilag), an institution where he studied Curriculum Studies as his major. It is safe to say that Wande Coal spent most of his early life close to home in Lagos State.

During the early stages of his life, Wande Coal was known for his love for music. This obvious love led him to become part of the teenage choir set up in his local church.

This devotion to music developed over the years and he has constantly been around the music industry ever since.

As devoted to music as he is, Wande’s first big break in the music industry came as a dancer rather than a singer. This is much to the surprise of most, as no one today sees Wande Coal as a dancer.

Wande Coal was signed to Don Jazzy’s Mo’ Hits Records in 2006 initially as a dancer. His fate was however destined to change as his music  prowess was noticed along the line.

This led to him being featured for the first time in D’banj’s Rundown/Funk you up album on singles such as “Loke”, “tonosibe” and “why me”.

His membership at Mo’ Hits records also guarantees him a place among the Mo’ Hits Allstars which allowed him play a vital role in Curriculum Vitae album.

The first entry of Wande Coal on the album is a single titled “Ololufe”, which highlighted the lyrical prowess of Wande Coal in writing music.

This song contributed to boosting Wande Coal net worth. It made the song one of the favorites of his fans. It is also tagged as one of the best local love songs in Nigeria.

Wande Coal promptly followed up his series of singles with his debut album in the Nigerian music industry titled “Mushin To Mo’Hits”.

This album rapidly propelled Wande Coal into the limelight, gaining many fans, both on the local and international level. It was widely accepted and received critical acclaim for his lyrical proficiency.

Throughout his illustrious career in music, Wande Coal has produced many hit songs while working together with other prominent music artistes including the likes of ikechukwu, Naeto C, Dr SID, D’Prince, Wizkid, and the rest of the Mo’Hits crew.

Things however quickly turned sour within the Mo’Hits crew in 2012 when a fallout occurred within the crew.

Don Jazzy created a new record label and additionally signed Tiwa Savage, as the first Lady of the crew. This led to Wande Coal and D’banj deserting the crew in 2013.

Related: How much is Don Jazzy net worth?

This marked the return of Wande Coal after his absence for a few months. Also, his independence album titled “Wanted” was released through Empire records.

Wande Coal Net Worth and Career

At the time of this writing, Wande Coal net worth is estimated to be about $2.9 million. This is justified by his consistency and longevity in the Nigerian music industry today.

Here are some of his awards:

You can download any of Wande Coal’s songs on any of these top Nigerian music download websites.

How Wande Coal Spends His Money

One thing that anyone can note from Wande Coal is his quiet life away from the music scene.

This makes him a very private person, something which is rare for music artists who are as famous as he is. As a result, little is known about Wande Coal’s investment, spending, and so on.

Speaking of cars, his only luxurious car known to the public is the E200 Kompressor Mercedes Benz which he acquired a couple of years back. He also stays in a luxurious mansion worth millions of Naira.

In one of our Favorite Wande Coal quotes and sayings, he said; “Shout out to the person who advised me to express my anger through my music”.

The right words from the right person at the right time may be a life changer, and that’s what we’ve seen happen to Wande Coal.

Summary of Wande Coal Net Worth

Wande Coal net worth of a staggering $2.9 million is quite a huge amount made through his music, Endorsements, concerts, shows, advertisements, and many other ventures which his music has afforded him.

It is important to recognize the work which Wande Coal has put in his career to have such an enviable net worth.

We would all agree that Wande’s worth is expected considering the fact that many other famous artists today consider him a legend and an inspiration to their own style of music.

Without any doubt, his impact in the music industry is not matched by many and his success is proof to show for it.

Oxlade Net Worth and Biography