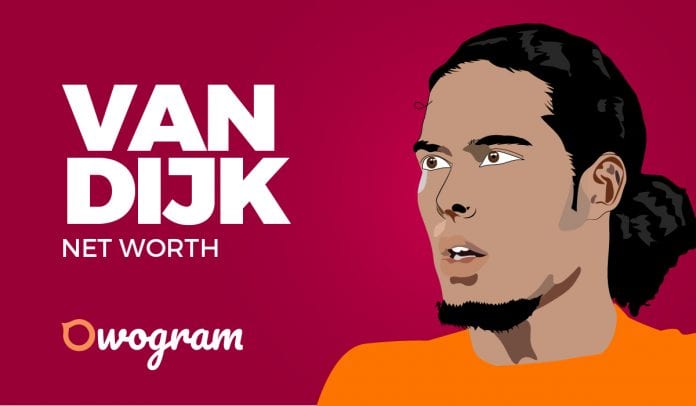 How much is Virgil van Dijk net worth?

Earning plaudits as one of the best defenders in the world is Virgil Van Dijk. He has proven himself at the highest level to be a stumbling block for attackers in search of goals.

His characteristics and body features make him the perfect prototype of a great defender which most attackers across Europe fear coming against.

Playing in the English Premier League, for one of the most successful clubs in Liverpool obviously tends to raise a question of Virgil Van Dijk net worth between fans.

Although this skilled defender is not listed as one of the top 20 richest footballers in the world, his fans and soccer enthusiasts want to know his salary, age, worth, assets, investments, lifestyle, etc.

Of course, it is an established fact that the Premier League is the most lucrative in the world, playing for a great team such as Liverpool makes you wonder about the earnings of their superstar defender.

His recent triumph in Europe as the European player of the year has done nothing other than fuel the fire to the discussion about Virgil Van Dijk net worth.

No need for further stress as we will find out what Virgil Van Dijk is, and how his career started, and his lifestyle.

In 2021, Virgil Van Dijk is worth an estimated $22 million. He is one of the most paid players in this list of Liverpool Players Salary. Here are some of his career highlights and awards below:

Virgil Van Dijk was born on the 8th of July, 1991 to his parents who originate from Holland and Suriname respectively. Virgil would only ply football whenever he got the chance to, either on the streets, cages, or local fields.

He went on trial at Willem II and was taken afterward. While playing for the academy, he would simultaneously juggle extra jobs as a dishwasher in order to earn some cash.

Though he initially started out as a right-back, he was positional lying trained to play at the center back position due to his height and physique at the age of 17.

Despite the positional change at the club, he was deemed surplus to requirements and clearly he wouldn’t be able to break into the first team.

Two years later, he was scouted by a former Dutch international player in Martin Koeman. He was subsequently signed for FC Groningen on a free transfer.

Despite his initial struggles at Groningen where he started his professional football career due to burnout, he finally settled down in the team and commanded a starting berth at the side.

Within three years of featuring at the club, he gained the attention of top clubs across Europe with solid defensive performances.

He was swiftly signed by Celtics in 2013 in an undisclosed fee. While at the club, he led the club to the Scottish Premiership title and was named among the PFA Scotland team of the season which was dominated by Celtics players.

In the summer of 2015, he was signed by the English side, Southampton for a deal worth over £13 million. Virgil Van Dijk net worth at this time became something tangible due to the exceptional increase in his income as a result of the move.

Van Dijk was immediately moved into the first team place by the then Dutch manager, Ronald Koeman. His debut came in a league game against West Brom which ended goallessly.

His debut goal for the club came within two weeks of his debut at the club, scoring a thumping header through a set piece by James Ward Prowse against Swansea.

A year later, following strings of excellent performances, Van Dijk put a pen to a new six-year deal that would keep him at the club till 2022.

Things kept getting better for Van Dijk at the club, as he was appointed captain of the club in January 2017, due to the departure of Jose Fonte from the club.

After the conclusion of that season, he was subject to interest from many top clubs across Europe, most notably from Liverpool.

During the summer of 2016-17, Van Dijk officially tendered a transfer request to the club officials, stating his wish to leave Southampton for a bigger club.

He however remained at the club for the 2017-18 season until 13th of December 2017 when he made his last appearance for the club.

As such, Liverpool sanctioned a whopping £75 million transfer for Van Dijk in a record deal for a defender at the time.

Celtic would go on to receive a windfall of 10% of the transfer fee due to a clause inserted in his contract by Celtic before selling to Southampton. Virgil Van Dijk net worth at this point boomed through the roof.

Van Dijk was immediately moved into first-team action as he made his debut for Liverpool only four days after joining the club. It was in the same game against Everton that he scored his debut goal which would help Liverpool win the game.

His signing helped Liverpool, one of the key teams of the best football leagues in the world, to bridge their leaky defenceman, as he created a strong partnership with Dejan Lovren. Van Dijk would later help the team reach the UEFA Champions League final against Real Madrid. Liverpool lost the game on the night, in a 1-3 loss against an offensive Real Madrid.

The following season, Van Dijk was able to finally break his league goal duck by scoring his first league goal for the club in a vital away win against Wolves.

He scored his first brace for the club in a league game against Watford which ended in an emphatic 5-0 Victory for the home team.

His first Champions League goal and assist came in a match against Bayern Munich, helping the club to a 3-1 win against fellow European giants.

At the conclusion of the season, Van Dijk was named in the PFA Team of the Year, as well as the PFA Players’ Player of the Year. He helped the team win the UEFA Champions League trophy against Tottenham in a match where he was awarded man of the match.

Capping off a successful year for Van Dijk, he won the FIFA Club world cup in the final against Flamengo. Virgil Van Dijk net worth is currently estates at $35 million.

Football players are well known to live extravagant and lavish lifestyle as a result of their huge earnings from their respective club sides.

The Premier league being the most lucrative even makes it more like for a player like him to live big.

Van Dijk net worth obviously allows him this luxury. He drives a Mercedes-Benz G-Class G 63 AMG worth up to $250,000 and lives in a luxurious mansion at the Merseyside.

In one of our favorite Van Dijk quotes, he once said; “You need to have dreams, you need to go for it, otherwise why would you be a footballer?” – Van Dijk

Summary of Van Dijk Net Worth

The huge figure behind Van Dijk net worth is deserving of a career that is nothing short of outstanding. Although he is not one of the top 10 most paid players in the English Premier League, he is a player to reckon with.

Building a career from scratch to the peak which he has attained is not an easy task to achieve. It is one that required a lot of hard work, patience, consistency, and effort according to his own words.

Becoming one of the best footballers in the world is only a given, considering the huge work he put in to ensure his career is as successful as it is today.

Virgil Van Dijk net worth of $22 million is expected to keep rising with his consistent, and sturdy defensive performances which he turns out every match day where his services are required. He is a top player and role model to many up-and-coming talents in football.