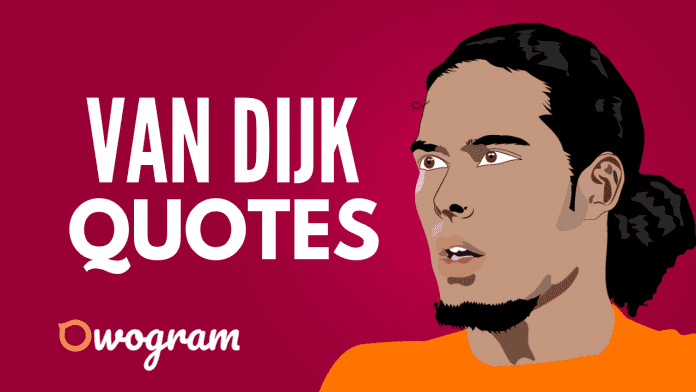 Yay! We bring to you 80 Van Dijk quotes about life and football!

Virgil van Dijk is a Dutch professional footballer who plays as a centre-back for Premier League club Liverpool and captains the Netherlands national team.

Considered one of the best defenders in the world Virgil Van Dijk net worth is proof of his success in soccer. He is known for his strength, leadership, and aerial ability.

How did he come this far? What are his ideologies about football? What is is inner drive? In our collection of Van Dijk quotes about soccer and life, we belief that things he has once said will help you learn more about him.

1. “You need to have dreams, you need to go for it, otherwise, why would you be a footballer?” – Van Dijk

2. “Anything is possible in football.” – Van Dijk

4. “As players, the only thing we can do is give everything on the pitch, and that’s what the fans do for us as well.” – Van Dijk

6. “It was always a dream of mine to play in the Premier League.” – Van Dijk quotes

8. “The influence of social media is unbelievable. It’s sad to see – it’s a fake life that some people live.” – Van Dijk

9. “I don’t really care, if somebody boos me or boos the team, we’re trying to win the game.” – Van Dijk

10. “The main thing is to try to put in your head that we all start from the bottom.” – Van Dijk

11. “It is a strength of mine to not really bother too much when people have their opinions, especially negative opinions.” – Van Dijk

12. “Quite a lot of things are more important than playing football and what we do, we are blessed.” – Van Dijk quotes

14. “I’m very happy to have already been welcomed into the LFC family, I’m a part of history having won the Champions League and hopefully we keep making history.” – Van Dijk

15. “Just focus on doing what you love to do and play your best game. Get your qualities out of the pitch, enjoy your game and don’t think about the other things.” – Van Dijk

17. “There is always room for improvement in our game.” – Van Dijk

20. “I think the mindset is always to think that you are never going to play pain-free.” – Van Dijk

21. “It’s always a great feeling to help Holland as well as Liverpool but we all do it together.” – Van Dijk quotes

22. “I am very happy with it, it is a great honour to be the captain of your country.” – Van Dijk

25. “In my position when things are going well it’s pretty easy to say that I’m sort of the guy that fixes everything. But if things are going bad then I’m the one that gets all the blame. In the end, we all do it together.” – Van Dijk

26. “I just want to be remembered as a fantastic player who gave everything for the team and enjoyed every bit of it.” – Van Dijk

27. “I have a very similar connection with Jurgen Klopp at Liverpool as I had earlier with Ronald Koeman at Southampton.” – Van Dijk quotes

28. “Like Koeman, Klopp knows exactly how to get the best out of me – by being critical. When the media are hyping me and being very positive, he will downplay the praise and all that – often with a wink.” – Van Dijk

29. “There are always things we can still learn to perfect.” – Van Dijk

30. “I won’t be a pundit because you have to be saying certain things that you might not even want to, but you have to.

31. “Everyone that plays for Liverpool always stays in the Liverpool family.” – Van Dijk

32. “To get the PFA Player of the Year is a fantastic honour. It’s the highest honour you can get because it’s voted by your fellow peers.

33. “Marco van Basten – I never saw him properly play but I know he was pretty good.” – Van Dijk quotes

34. “I think at a club like Liverpool you always feel a bit of pressure. You should. But it doesn’t bother me.” – Van Dijk

35. “No one is going to look at the good things you do. Everybody is going to watch the bad things and that is how it is.” – Van Dijk

36. “I just enjoy playing for Liverpool, it doesn’t really matter who is standing next to me.” – Van Dijk

38. “We need to look at what we have ahead of us and that is more important than looking at someone else. It is the only way forward.” – Van Dijk quotes

39. “You have to tell each other the truth, you cannot be nice and happy when we want to achieve so much as a team and a club.

Related: 50 Notable quotes by Raheem Sterling and things he once said

42. “Personally, I like to put things in perspective.” – Van Dijk

43. “We can do what we love to do and also to play for Liverpool – they are such a big club. You need to enjoy it but the pressure will always be there.” – Van Dijk

44. “Obviously, I’m honoured to be mentioned as a candidate to win the Ballon d’Or, but the only way I can influence it is to just focus on playing well.” – Van Dijk

45. “The only thing I want to do is keep working and keep giving everything I can in every game.” – Van Dijk quotes

47. “It’s great to get recognition from other players.” – Van Dijk

50. “You have to, you need to be hard with each other. When things aren’t going right you need to tell each other, otherwise, it’s going to be too easy.” – Van Dijk

51. “We just need to keep improving. Keep doing what we are doing and get better. That’s the only way forward.” – Van Dijk

52. “I want to enjoy the games because not a lot of people have the chance to do what we do. That’s how we started football as well, enjoying what we are doing and that’s what I try to do as well.” – Van Dijk quotes

53. “Obviously there are a lot of expectations when you come to a club for a record fee but you can’t change that. You just need to perform and show it on the pitch and gain respect through that.” – Van Dijk

54. “There are plenty of good central defenders around and I enjoy watching them.” – Van Dijk

55. “If I watch big games like the Champions League on TV then I’m definitely watching what different centre-backs are doing in certain situations.” – Van Dijk

56.”Football is a game. It’s something I love to do. But there are so many things in life that are more important.

58. “There’s always things to improve, you can’t be satisfied with what you have.” – Van Dijk quotes

59. “You have pundits and fans from other teams who will say loads of things and it goes past me. That’s life.” – Van Dijk

60. “Winning a trophy is important for your mentality.” – Van Dijk

61. “You take every opportunity you have to win a trophy. That is always the goal, and winning makes it a little bit easier the next time.

63. “I was never a standout player until I played for the under-19s and became the captain. Then everything went much better – I played some games for the under-23s and after that, it went pretty quickly.” – Van Dijk

64. “When I went to FC Groningen, I had to take my bike to train – my first wage went on driving lessons. Before I signed my contract, I was 15 or 16 and working as a dishwasher in a Breda restaurant.” – Van Dijk

66. “The bigger you get as a player, the bigger the spotlight.” – Van Dijk

68. “You should not have any fear when you go out on the pitch.” – Van Dijk quotes

69. “Fear is not something we feel at Liverpool.” – Van Dijk

70. “I think Aguero is one of the best strikers in the League. And he’s been doing it for many years.” – Van Dijk

72. “You need to be aware of the qualities of every striker you face, as I always am, but sometimes you need to be smart and more than 100% ready for anything.” – Van Dijk

75. “I’d rather play with pressure than without.” – Van Dijk quotes

76. “All the players in the league, I think, want to play for trophies, want to get trophies.

77. “In every team, there are going to be moments of vulnerability.

78. “Scoring goals looks nicer and much more attractive than a last-ditch tackle for younger people.

79. “I was always playing on the streets with my friends until I was 15 or 16 and I wanted to do things with my skills that were exciting.

Thanks for checking our collection of quotes by Virgil Van Dijk. Will you tell us which of these quotes you feel speaks more of his personality?