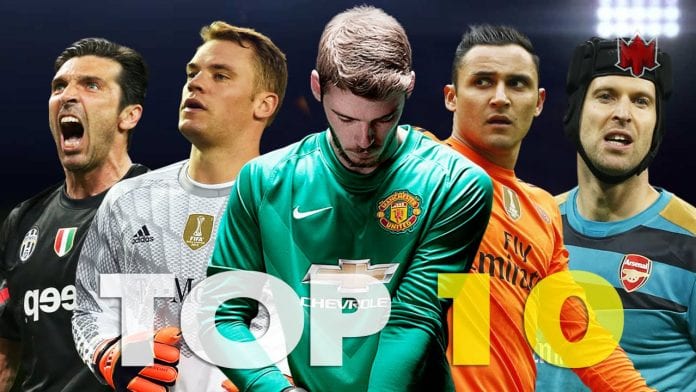 The defining and redefining of the custodian role in the world of football is ever dynamic in modern football.

The role of the goalkeeper in the team is now as important in the attack just as the role in defense is necessary.

The goal of the keeper is to prevent the opposing team from outscoring their team in order to ensure the team’s winning margin is kept intact.

But the modern goalkeeping prowess has ensured that many goalkeepers are on top of their game.

The likes of Eduard Mendy whom Chelsea just acquired from Rennes in the just concluded summer transfer period had kept many clean sheets in the English Premier League already and had helped the Chelsea football club to the second on the log in the process.

More so, the Senegal international is dubbed to help Chelsea secure their first English Premier League title since 2017 at +750 odds. Odds by sportsbookreview.com

However, there are too many great goalkeepers in the world of football.

Below is the list of the ten best custodians at the moment.

Worthy of the list of the Top 10 goalkeepers in the world is Eduard Mendy.

By distance margin, the Senegalese wouldn’t have been on the list even in the nearer future but such is the benefit of moving to a far better club with the limelight shining on you.

Beyond his move to Chelsea last summer, the Senegal international has proven on countless occasions why he deserves to be among the best shot-stopper in the world right now by helping Chelsea in the quest for league glory.

The star showed that Chelsea lost more than 2 0points in League last season but the injection of Mendy to the west London club had helped the team stay affirm at the back and the Chelsea latest signing can be praised for the improvement.

Next on the list of the top 10 Goalkeepers in the world right now, is David De Gea.

The Spanish custodian can make the type of saving no one else can and with the skill that the 28-year-old shot-stopper has in abundance, it’s not a galaxy to say he should be at the helm of the best goalkeeper log in the world but the series of error committed in the 2028 FIFA Mundial in Russia would spin the genesis of the Manchester United custodian downfall.

Next on the list of the top 10 goalkeepers in the world is Samir Handanovic. The inter Milano shots stopper is a truly world-class goalkeeper and while he scarcely gets the praise he deserves since his move away from Udinese in 2012,

He has consistently shown why he should get the edge of being among the elite in the world of football and the Slovenian has quietly gone about establishing himself as Europe’s top goalkeepers if not the world while establishing his remark in the rank of the great Toldo in the realm of Inter Millan goalkeeper legend.

The tall, calm, excellent communicator and superb in the air, Handanovic is an old-fashioned type of goalkeeper, who places an emphasis on defending above distribution and ball playing and sweeping prowess.

But his higher save percentage in Serie A has ensured that Inter Millan campaign is much relevant despite the team dip in form.

The tall and young goalkeeper prodigy scarcely put the wrong foot in his bid to become the best in his position.

While patiently biding his time as the heir to the throne of Italian number one in years back despite being so young.

The AC Millan goalkeeper was well known by many coaches and colleagues as the best. No doubt, he’s one of the top 10 goalkeepers in the world.

Even in the face of AC Millan decline, the custodian was tagged as the shining light in the red side of San Siro’s darkness and the Millan born netminder justly proof while everyone was in love with his capabilities with series of stunning saves and promoting his team to the brink of UEFA Champions League before the inclusion of Zlatan Ibrahimovic in 2018/2019 season.

Came to the limelight after the departure of David De Gea from Atletico Madrid in 2011 and he has since established himself as one of the best in the game.

The former Chelsea goalkeeper was awarded the golden glove in the last FIFA World cup in Russia as he guided his mother’s land to their best ever position in the modern world cup as Belgium finished in third place.

Moreover, his higher save percentage and Courtois equalling the best goalkeeper clean sheet in the history of Spanish La Liga in the last campaign helped Real Madrid to the 33rd La Liga Victory.

The calm, tall and brilliant Thibaut is the reason why Real Madrid are in the La Liga title race this campaign and his consistency had justified his pick among the rest of the world goalkeeper in the top best.

Next on the ranking of the top 10 goalkeepers in the world right now is Ederson.

The Brazilian is one of the most underrated goalkeepers in the world and the lack of trophies and down with Manchester City is the reason why the brilliant Brazilian cannot climb beyond this on the ladder of the great goalkeeper at the moment.

But since the Brazilian moved away from Benfica to Manchester City in the summer of 2017, he has quickly established himself as one of the best not only in the English Premier League but in the world at the moment.

While he won the PFA best goal in 2019 and won the golden glove in 2020 despite Cityzen not in their dominant best.

The alertness, calm, sweeper role, ball playing, and shot-stopping abilities of the Brazilian is the bone of the modern goalkeeper and Ederson is rightly using the ancient and modern techniques to boost his confidence in front of the goal post.

Alison Becker is no doubt one of the top 10 goalkeepers in the world.

The Ederson fellow countryman and great shot-stopper! Allison Becker and Ederson are nearly equal in ability and they both have quick feet, a sweeper to the bone, and calmness and ensure that the Brazilian saves his team countless times.

It’s not a coincidence that the arrival of Allison Becker had boosted the domination of Liverpool in English Premier League and created a fear factor in the UEFA Champions League.

While winning the first ever Ballon d’Or Yacine trophy is not mere achievement but the Brazilian would have climbed a little further in the list of the best goalkeeper if not for the consistent injury that had plagued his game time.

The German’s Barcelona netminder is currently making his fellow countryman run for his position in the heart of Germany defence.

Without a doubt, the German goalkeeper has been the best player of Barcelona behind only the great Lionel Messi for some years now and the Barcelona goalkeeper is the reason why Barcelona is challenging for many trophies since the dip in form of Lionel Messi.

The Slovenian consistency is a legend in the field of the goalkeeper! While looking at Atletico Madrid’s defense, the only consistent factor that ensures the defense is intact is Oblack.

His over 80% save makes him the most reliable shot-stopper and after his 100th clean sheet for Atletico Madrid came in just his 178th appearance for the Los Chocholeros.

The Slovenian, has won the La Liga’s Zamora trophy four times in the last five year. Oblak is the best goalkeeper in the world right now and he might just stay there for a long while.

It’s not a coincidence that the German most successful team won their awaited sixth UCL only when Neuer is fully fit.

Guiding the world the Germany national team to the 2014 world cup while winning the golden glove and winning the 2013 UCL with Bayern had only cement the greatness of the big Dutch goalkeeper.

His vitality, technical prowess, calm and astute alertness has ensured that his team can attack any team in the world without looking back at the problem behind.

In the modern era, the only goalkeeper to be on the best trio footballer is Manuel Neuer and the previous campaign and current one is the time that Manuel is getting everyone worked upon how good he’s been all his career.

While it’s true that Manuel has not been at his best for some time now, but coming back to his best after shaking off the recurrent injury that has plagued his days, but now been back to his, the big goalkeeper is sure to stay for long at the top.