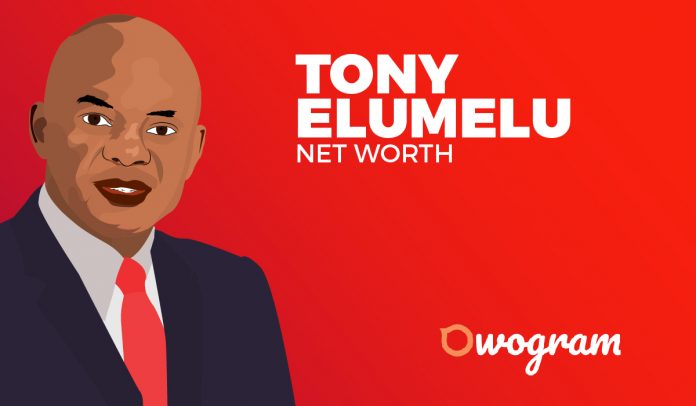 How much is Tony Elumelu net worth today?

Tony Elumelu is one of the most popular figures in Nigeria, as well as on the continent. Through his numerous credible works in different sectors on the African economy, he has established himself as a force to reckon with in the African space.

As an entrepreneur, economist, investor, and philanthropist; his fingerprints can be found in all sectors you can ever imagine. This is why Tony Elumelu Net Worth is a subject widely discussed.

Over the last few years, Tony Elumelu has showcased his business acumen in creating a self-sustainable business, identifying industries with huge potentials, and investing millions of dollars in such industries.

This is why he is seen by most as a role model in business for most entrepreneurs. In fact, Tony Elumelu is one of the top 10 richest men in Nigeria today.

His impact is felt throughout most countries on the African continent, and this is why Tony Elumelu Net Worth will be subject to discussion in coming years.

Here, we will give a precise answer to what Tony Elumelu Net Worth is while outlining the various ways through which he made as much fortune as he owns today.

As of today, Tony Elumelu is worth an estimated $1.4 Billion and he’s one of Nigeria’s top wealthiest men. Here are some of his best career highlights:

Born on the 22nd of March, 1963, Tony Elumelu originates from the suburbs of Onicha-Ukwu in Aniocha North Local Government Area of Delta State, one of the 36 states in Nigeria.

Elumelu was born into a family with three other siblings, including  Ndudi Elumelu who is a member of the Nigerian Federal House of Representatives.

Elumelu was deeply invested in education and it is evident in his acts of philanthropy today, where he offers different kinds of scholarships that give more people access to education.

Elumelu bagged his first degree in Economics from Ambrose Alli University, before proceeding to earn his master’s degree from the University of Lagos. Other details of his childhood experience remain undisclosed, and we assume it will remain so for the foreseeable future.

Elumelu’s illustrious career began during his service as a member of the National Youth Service corps (NYSC).

This is a compulsory program set up by the federal government of Nigeria to help promote diversity and tolerance. During this service year, his primary place of the assignment was at the Union Bank. It is safe to say that it was here that he learned some vital skills that set him up for a good career in the future.

In no time, Elumelu established his footprints as a business mogul by acquiring the Standard Trust Bank in 2005. He further spread his business network in the Nigerian banking and finance industry by also acquiring the United Bank for Africa (UBA).

After several years of service at the bank, he left his position as CEO of the company by retiring in 2010. This was a move to allow him to focus and diversify into some other investments like energy, real estate, hospitality, agriculture, health, and so on.

All of these businesses were overseen by his company known as the Heirs Holdings. This is evidence that Tony Elumelu Net Worth was already something of envy, early on in his career.

In order to give back to the society which made him the person he is, according to him, he established the Tony Elumelu Foundation.

This is a philanthropic organization focused on creating a better life for Africans through quality education, health, food, shelter, clothing, and so on. Today, the organization has been able to achieve so much within a decade of its establishment.

Over the years, Tony Elumelu has served prominent roles in different international and African organizations that have objectives to improve the lives of Africans generally.

Elumelu has served as an advisor to the USAID’s Private Capital Group for Africa (PCGA) Partners Forum. He also held a position as the Nigerian President’s Agricultural Transformation Implementation Council (ATIC).

Elumelu was once the vice-chairman of the National Competitiveness Council of Nigeria (NCCN) which he helped establish back in the day.

Other positions where Elumelu has served include Co-Chair of the Aspen Institute Dialogue Series on Global Food Security.

He additionally chairs the Ministerial Committee to establish world-class hospitals and diagnostic centers across Nigeria, at the invitation of the Federal Government and the Presidential Jobs Board, engineered to create 3 million jobs in one year.

Each of these roles has obviously helped Tony Elumelu Net Worth, considering the accumulation of wealth acquired through each one of them.

Elumelu was a member of the Global Advisory Board of the United Nations Sustainable Energy for All Initiative (SE4ALL) and USAID’s Private Capital Group for Africa Partners Forum.

He was one of the co-chairs of the 26th World Economic Forum on Africa in Kigali, Rwanda, from 11 to 13 May 2016. Today, Tony Elumelu Net Worth is estimated at a staggering $1.4 billion.

How Tony Elumelu Spends His Money

As a billion-dollar rich individual, it is expected that luxury properties should come naturally. Tony Elumelu Net Worth allows him the financial freedom to afford most things he has an interest in. Luxurious cars, mansions, and other related properties are things you can’t find lacking for someone of his caliber.

Speaking of automobiles, Tony Elumelu owns 2 known luxury cars including the Mercedes S class worth over N30 million, as well as a Range Rover which is worth in the same region as the latter.

Though there are only 2 cars that are identified with Elumelu, we assume he must have a few others unknown to the public.

For someone who has lots of investment in real estate in Nigeria, owning a luxurious mansion in Lagos is definitely a given.

The mansion features modern amenities such as a state-of-the-art gym, swimming pool, sauna, and other luxurious details which make up the interior of his home. The total worth of his home is, however, subject to speculation as different figures have been reported.

In of our favorite Tony Elumelu quotes, he once said; “Most times businesses start off well, but poor management leads to early failure.” So, we wouldn’t have been writing about Tony Elumelu net worth today, if he hadn’t managed his businesses well.

Summary of Tony Elumelu Net Worth

Tony Elumelu Net Worth of over a billion-dollar testimony to the riches in wealth and means available in Nigeria.

Their excellent business ability makes him one of a kind in Nigeria, as he implements numerous business strategies which have so far yielded positive results in terms of huge profits.

It would really be terrible to doubt the business mind and ability which Tony Elumelu possesses.

This article has been able to provide adequate information on Tony Elumelu Net Worth, highlighting his business portfolios and numerous roles across the world as his source of income.

For a person of Elumelu’s caliber, it is important to know that much of his success is down to his hard work, top business management skill, and talent in dealing with business. People of like minds are rare to come by around the world today.