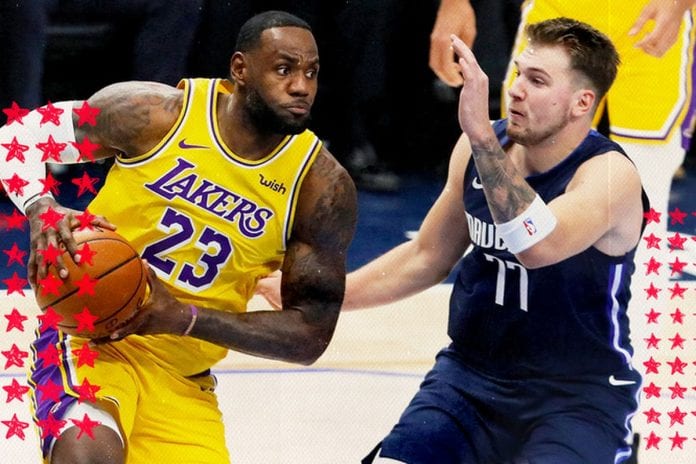 The race for the NBA MVP title is always run between those up-and-coming hotshots and the league’s longstanding stars, and this year will be no different.

Many legends of the game have been rolling back the years this season with familiar names such as LeBron James, James Harden, Kevin Durant, and Chris Paul all throwing their hats in the MVP ring.

However, standing in their way is a new breed of players whose numbers include current MVP holders Giannis Antetokounmpo, as well as Joel Embiid and Luka Dončić.

In this piece, we take a look at some of the main contenders, all of whom are well placed to make a late-season burst so they can be named MVP for 2021 and demand even more lucrative contracts in time for next season.

Will the Greek Freak keep a hold of his coveted MVP crown or can another baller wrest it from him?

The unstoppable force that is Giannis has already claimed back-to-back MVP titles and there will not be many people willing to back anyone other than him for the 2021 version.

That consensus was solidified during the recent All-Star game in which the Greek star produced a flawless performance for Team LeBron and took home the All-Star game MVP title in the process.

Historically speaking it is rare for a player to ever be awarded the MVP title three years in a row, although there are precedents, with players like Larry Bird, Wilt Chamberlain, and Bill Russell having managed it.

With so few players having achieved the feat the NBA betting odds might lengthen a little for Giannis, and it will be up to him to give the MVP judges no choice but to select him.

If he keeps pouring in triple-doubles for fun, then the betting punters and ardent fans of the sport will proclaim him MVP no matter what the judges decree.

Can LeBron James’ millions of fans inspire him to another NBA Championship as well as an MVP title?

Luka Dončić – Chubby or Not, Luka Keeps on Winning

It is becoming a running joke at the start of each NBA season that Dallas Mavericks star Luka Dončić appears after the off season carrying a few extra pounds around his waist.

However, once he gets up and running his momentum is hard to stop. The Slovenian youngster was in the MVP mix last year only to run out of steam down the stretch, but another 12 months of experience seems to have done him the world of good as, just like Giannis, he is becoming known as a triple-double machine.

While mere mortals scratc around for crumbs of success like the MVP title, LeBron James always has his sights set higher, mopping up NBA Championships as if it were the easiest thing in the world.

With the bookies unsure if the NBA will grant Giannis a hattrick of MVP crowns, it makes plenty of sense to think that LeBron will pocket the title.

He is a past master of turning on the style just as the business end of the season gets going, so expect a late surge of superhuman dunks and jump shots from the future hall of Famer, as he keeps trying to outgun the league’s youngsters.

Joel Embiid – From Zero to Hero

Prior to this season there were not many basketball pundits or fans who had Joel Embiid showing up on their MVP radars, but all that has swiftly changed, thanks in part to the inexorable rise of the 76ers under Doc Rivers.

The partnership that Embiid has fostered with Ben Simmons is an impressive one, and he already has backroom staff in Philadelphia raving about his potential to get even better. If he does improve on his early season form, then his favorite tag for the MVP title could well hold water.