Home News Sports News Thiago’s Running the Show! How Midfielder’s Re-Emergence Has Put Liverpool Back In... 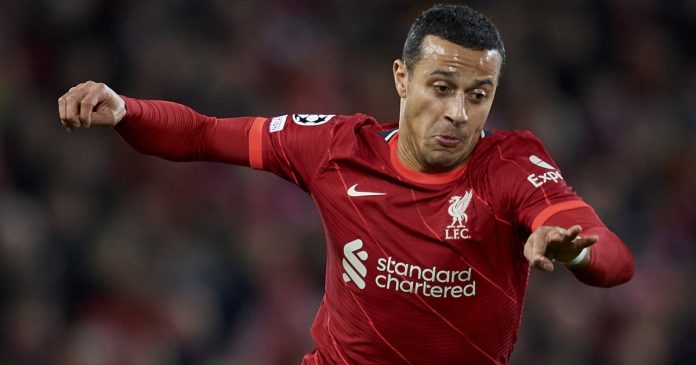 Not many Liverpool fans would have predicted that Thiago Alcantara would be one of the club’s most important players this season, or that his re-emergence in the first XI would serve as a perfect and direct replacement for the one man Jurgen Klopp’s side missed more than anybody else.

Shortly after Liverpool lost 3-2 at West Ham United in early November, leaving them with just six wins from the first 11 games of the season and four points off the top.

Liverpool were frequently caught in the transition after losing the ball; counter-attacked too easily and leading to the concession of 11 goals in those opening 11 games.

More often than not this was happening after Liverpool had gone a goal up, as Klopp’s side struggled to hold onto leads and control the rhythms of a game.

The headline was that Liverpool missed Georginio Wijnaldum, whose metronomic presence in central midfield had been under-rated in their title-winning 2019-20 season.

By calmly controlling possession, and by recycling the ball so expertly, he helped keep Liverpool penned in the opposition half – therefore limiting opposition counter-attacks and ensuring Liverpool could grind out wins.

Fast forward five weeks and the landscape has completely changed.

Thiago has started eight Premier League games this season, including all six of the matches since that West Ham defeat. Liverpool have won all eight.

Not all of these have been convincing scorelines, and yet all have closely resembled the style of their football in that title-winning season; incredible energy in the press, remarkable speed in sending waves of attacks towards the goal, and slick interchanges from midfield into the forward line.

Put simply, Liverpool have managed to keep up the pressure for long periods, swamping and exhausting the opponent until breaks become too difficult – and they succumb.

That’s what happened against Aston Villa, Wolves, and Newcastle United, and although Mohamed Salah and Trent Alexander-Arnold have taken the plaudits for their more glamorous contributions, the difference from West Ham to now is almost entirely down to the Spain international in their midfield.

Thiago averages 77.61 passes per 90 this season, the third-highest figure in the Premier League and just behind defenders Aymeric Laporte and Adam Webster; typically center-backs top the charts, making Thiago’s involvement all the more telling.

He also averages the third-most passes into the final third per 90, behind defenders Kyle Walker and Webster, and makes 12.64 progressive passes per 90 (WyScout’s measure of ‘a forward pass that attempts to advance a team significantly closer to the opponent’s goal’), the fifth-most in the division and the most of any non-defender.

These stats tell us two things. First, Thiago is simply running the show. He always makes himself available for a pass with his intelligent reading of the game, giving his teammates an out ball and then – invariably – distributing it neatly, opening up space and/or keeping Liverpool in enemy territory.

His technical ability and understanding of space allows Liverpool to evade any opposition pressing and remain firmly in control of the patterns of play, indirectly preventing counters – just like Wijnaldum used to do.

The second thing it tells us is that Thiago is purposeful and forward-thinking in his actions. This is not shuffling sideways, these are assertive vertical passes that push and push, knocking on the opposition door and raising the level of his own team.

Part of the reason Liverpool’s full-backs and front three are finding so much space recently is Thiago’s rapid distribution through the lines, propelling the action into the final third at a moment’s notice and catching the other team off guard.

It is no coincidence that over these last six league wins Liverpool have played over 200 forward passes on three occasions, the same amount as in the previous 11. And by keeping the ball high, by circling it in the final third, Liverpool keep it away from their own goal.

Thiago’s passing range should also be noted. No Liverpool midfielder completes more long balls than his 3.5 per game, and of course the vast majority of these are diagonals; opening up the pitch with a switch of play that sets a full-back free.

He has essentially revolutionized and revitalized how Klopp’s Liverpool play – although the upturn in form is also partly due to improvements in the defensive line.

In the article from November, I also pointed to Virgil van Dijk lacking match sharpness after such a quick recovery from an ACL injury. He appears to be back on the up now.

Similarly, his ‘defensive quality’ (measuring his personal contribution to expected goals against [xGA] conceded per defending opportunity) had gone down from 85 to 8, and has tentatively climbed back up to 14.

Ibrahima Konate has also come to the fore recently, starting four of the eight games since West Ham, and it is noteworthy that while his ‘defensive quality’ is 85, the same as Joel Matip’s, Konate’s ‘recovering of a moving ball’ (the ability to regain possession by intercepting or otherwise pick up the ball)  is 87 compared with Matip’s 69.

In other words, he is better at coping with the assertive parts of defending, helping crank up the energy and pressure.

Together with Thiago pulling the strings in midfield, Klopp has found a way to solve the only two issues that were undermining his title challenge.