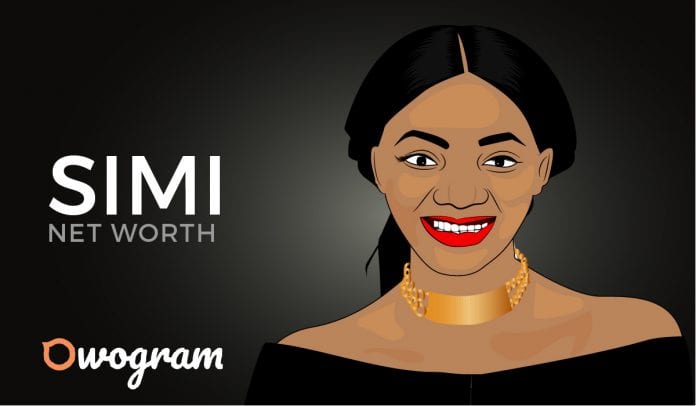 What is Simi net worth?

With over 20 songs to her name, Simisola has practically done it all from cult classics like Jamb question to national hits like Joromi, Ayo, and Smile for me.

You would not be exaggerating to call her one of the most influential and bankable start the Nigerian music industry has ever seen.

Not many faces in the music industry can boast of Simi net worth or the level of fame she has achieved in the industry over the years.

She is a peerless Singer and Sound engineer who has impacted pop culture in ways that will continue to be appreciated long after she retires.

Simi Net Worth and Notable Highlights

As of Today, Simi’s net worth is estimated to be $1.6 Million dollars. Below are some of Simi’s highlights:

Simi was born in Ojuelegba to the family of Oladele Ogunleye on the 19th of April, 1988, as the last of four children.

In an interview with Juliet Ebirim of Vanguard newspaper, Simi revealed that her parents separated when she was 9 years old.

She also revealed that she grew up as a tomboy and her father died in 2014 due to unknown causes.

Simi grew up dancing and singing as a member of her local church’s choir and she also revealed she was a bit spoiled during her childhood and got everything she wanted on a silver platter. She wrote her first song at age 10.

Simi attended Stars International College, a secondary school in Ikorodu, Lagos State, and also had her tertiary education at covenant University, where she studied mass communication.

Although, Simi has not made it to the list of Nigeria’s top ten richest musicians, what she’s achieved speaks volume.

Simisola’s professional music career kickstarted in 2008 after the release of her first studio album Ogaju, which is made up of different types of songs like “Iya Temi” and “Ara Ile”.

Samklef was tasked with the entire production of the studio album.

Another 5 track EP Restless was released by Simi In January 2014, her performance was so great it earned her a record deal with X3M Music which most likely was the start of Simi net worth acquisition.

The EP is composed mostly of covers recorded by well-known musicians overseas, such as “Man Down” by Rihanna, and Adele’s “Set Fire to the Rain”.

On January 9, 2014, two hot singles were released namely “Tiff” and “E No Go Funny”. Both songs received general acceptance from the Nigerian audience, resulting in frequent airplay and generally positive reviews from critics.

The video for “Tiff” was directed by Josh Clarke and released on August 30, 2015. The song was nominated for Best Alternative Song at the 2015 edition of The Headies.

Later that year, Simi was awarded the Most Promising Act to Watch category during the 2015 Nigeria Entertainment Awards.

In a subsequent interview with Leadership newspaper in Nigeria, where she made it known to the general public and her fans that work has started on her next studio album to be released early 2016.

After releasing the hit single “Jamb Question” whose sound reverberated all over the country, She was included as one of the fast-rising artistes to watch out for in 2016 by Not just OK, one of the best Nigerian music websites.

A remix of “Jamb Question” was later released and it features popular Nigerian rapper Falz. “Love Don’t Care”, a love ballad single produced by Oscar Heman Ackah was released by Simi On February 14, 2016.

It was massively accepted and became popular in no time as the song received frequent radio airplay and received positive reviews as a result of its uniqueness and moral contents.

The song effectively addresses incessant issues plaguing the Nigerian society such as tribalism and discrimination in Nigeria.

Clarence Peter’s expertly directed the music video of the song depicting all the message the song is trying to pass across to Nigerian audience.

In October 2016, Simi was nominated for Best Breakthrough Act at the MTV Africa Music Awards. In the same month, Simi had a collaboration with Falz the bahd guy to release the extended play of the Chemistry which turned out to be an excellent performance and success.

Later that year, December 2016 precisely, Simi was nominated in three categories at The Headies 2016, winning one capping off an excellent year for Simi and her career. One could only imagine how much of an impact 2016 had on Simi’s net worth.

Early 2017, Simisola bagged an endorsement with Nigerian Telecommunications giant Etisalat which is an obvious boost to Simi net worth.

The two songs were joined by music videos directed by Clarence Peters and Aje Films, respectively. Music videos for “O Wa Nbe”, “Complete Me”, “Gone for Good” and “Aimasiko” were also released to additionally promote the album.

Simi disclosed the album’s tracklisting on September 1, 2017. Simisola was released seven days after the fact and debuted at number 5 on the Billboard World Albums chart.

Simi also bagged another endorsement with popular browser within the Nigerian community named Opera mini after she was named as their brand ambassador. This also is an obvious boost for Simi net worth.

In March 2019, Simi disclosed through various messages on her numerous social media platforms that she would be releasing her third studio album tagged Omo Charlie Champagne, Vol. 1 simultaneously on her birthday on April 19, 2019.

Omo Charlie Champagne features a slightly different feel from the regular afro-centric style of music which Simisola is well known for.

It incorporates a mix of various elements such as sentimental ballad, Afropop, Afro-fusion, Afro-soul, R&B, EDM and moombahton.

Oscar was tasked with the overall production of the album, with guest production from Vtek, Legendury Beatz, and Sesan.

Simi dedicated the album in memory of her late father Charles Oladele Ogunleye, who died in 2014. Omo Charlie Champagne, Vol. 1 was followed through with three singles: “I Dun Care”, “Lovin” and “Ayo”.

In May 2019, Simi left the X3M Music after the expiration of her 5 year recording contract with the label.

Later in June, She announced the launch of her independent record label named Studio Brat.

As of today, Simi has not worked with any of the 20 richest musicians in the world, we hope that someday, her relentless effort will earn her such honor.

In one of Simi quotes, she said; “African parents, black people culture is beautiful. We have the most fun, share the magic with the sun, make amazing music, have the biggest laughs and weird parents that love us. We’re not perfect at all, but we’re so…” – Simi

Here are quick Faqs about Simi below:

Which song made Simi popular?

Is Simi and Falz dating?

How many children does She have?

One – A baby girl

Which Record Label is Simi signed to?

As of today, Simi net worth is estimated to be roughly $1.6 Million dollars.

Simisola is one of the most respected and popular singers in the Nigerian music industry.

There’s no doubt that he will remain as one of the best female singers we have ever seen.