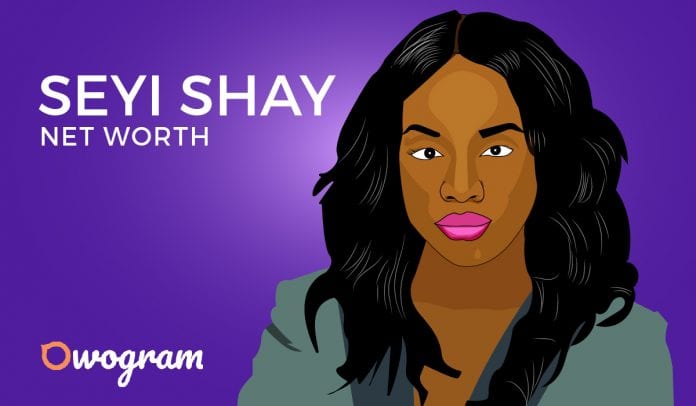 How much is Seyi Shay net worth?

Born into a family with an extensive background in music, it took Seyi Shay only a few years to master some aspects of music, after which she decided to pursue a professional career in music at the age of six.

Seyi lived in the United Kingdom and was a member of several musical groups over there.

Her talent has also taken her to several cities in many countries, where she wowed the audience with her wonderful voice.

Although, she’s not one of the top 10 richest musicians in Nigeria, Sheyi Shay net worth is worth talking about.

She has written and produced a lot of award-winning songs including three songs for the soundtrack to Konami’s video game “Crime Life”.

The source of her income is mostly from being a successful World Music Singer. What then is Seyi Shay net worth?

As of today, Sheyi Shay’s net worth is estimated at ₦646 Million Naira ($1.616 million dollars). Here are some of her highlights:

She was born on 21 December, 1985 in Tottenham, London, United Kingdom to Nigerian parents.

Her father is native of Ife while her mother hailed from the Northern Nigeria. She has three siblings and they were raised by their single mother.

Seyi Shay grew up in a religious setting family and felt like a single child during her adolescence.

She schooled at the Command High School in Maryland, Lagos before returning to London for her undergraduate studies.

She holds a degree in music and business management which she obtained from a local UK College and the University of East London respectively. At that time, Sheyi Shay net worth isn’t a topic of interest.

She was a member of her secondary school choir and toured the world with the London Community Gospel Choir.

Seyi started her music career early enough. Her motivation came from her late mother and siblings who were also involved in music in different ways.

At age 6, she was already performing in her school choir. Later, at 14, she performed for the London Community Gospel Choir (LCGC) in their worldwide tour which included 13 cities in Japan.

Shay signed her record deal with No Apology, a record label, No Apology and formed a UK-based girl band called Boadicea in 2006.

The band was managed by Ron Tom, founder and manager of All Saints and Sugarbabes. However, the group went their separate ways two years later.

Also, Seyi wrote and produce the soundtrack for the Konami Game “Crime Life”, wrote, “You Will See” for Mel C and “White Lies” for Rapper ChipMunk. At this point, Seyi Shay net worth had started to rise.

While collaborating and performing, she partook in the British Pop/RnB Girl Band “From Above”, and emerged as the lead vocalist for the group.

Apparently, Seyi has worked with numerous bigwigs in the music industry both locally and internationally.

In 2011, Sound Sultan motivated Seyi’s return to Nigeria during one of his visits to London. Thereafter, she heeded his advice and came to Nigeria to promote her career in the industry.

On her arrival, she was introduced to Cecil Hammond who signed her under the Flytime Music Label.

In 2012, she released a single, “Irawo” which became a hit and garnered massive airplay in Nigeria, and Seyi Shay net worth gradually a topic everyone is interested in.

Seyi has released many hit singles. She released her debut studio album in 2015, and one EP titled “Electric Package” in 2018.

“Seyi or Shay” is the debut studio album of this talented singer. She started working on it in 2011. In 2015, it was released under Island and Stargurl Limited.

As a superstar vocalist, Seyi Shay has collaborated with several artistes. She was featured by Wizkid: In Love, Mr Walz : Paradise, Praiz: For You, Yarinya: Amir and many more.

Related: Wizkid net worth and biography

Seyi Shay starred in a 2018 Nigerian film, “Lara and the Beat”. The movie was directed by Tosin Coker and Tolu Olusoga.

Due to Seyi’s Love for the girl-child, she established a charity, “Shay A Ray of Hope” in 2015. The charity focuses on the underserved children, women, and most especially helping the girl child.

In addition, Seyi has continued to use her international fame to promote justice for women.

For instance, she joined in the UN campaign to empower women and collaborated with some other world entertainers in the remaking of the Spice Girls’ “Wannabe” video.

Also, as an ambassador for Genevieve Pink Ball Foundation, she sang the song “Because we care”.

The aim of the song is to give hope and encourage breast cancer patients. She is also a staunch supporter of Slum 2 school projects.

In 2015, she also joined Wizkid and Tiwa Savage as brand ambassadors to Pepsi. In 2016, Nigeria Stock Exchange unveiled her and Burna Boy as ambassadors. In 2017, she became the face of Gionee phone brand.

Adding to Seyi Shay net worth is a lot of expensive and exotic cars and builidngs.

You are judged by your outer look at first before people begin to test your inner self. Looking good is a good business but you need to take it seriously.

It is funny that despitehow popular Seyi is and the thousand and one times she has made headlines, we still really don’t know jack about her love life.

She has managed to effectively separate her private life from her public life.

No matter what people say about Seyi Shay, they still can’t deny the fact that the girl is good at what she does.

Seyi is a genius. And as natural as it comes to her, you can tell without any doubt, that she’s steadily honoring her craft.

Summary of Seyi Shay Net Worth

Her love for music keeps soaring with her lovely vocals to back up. Seyi Shay is one of the few songstresses who has become a force to reckon with in the music industry.

Having read and learnt about Seyi Shay net worth, it is of no doubt that she is one of the richest female artistes in Nigeria.

What did you think? Let’s have your comments in the section provided below.