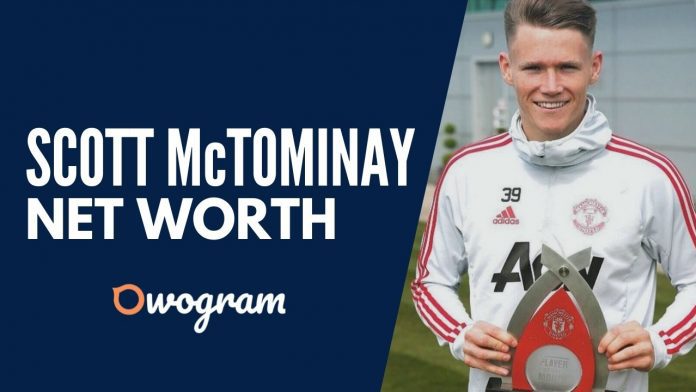 What is Scott McTominay net worth?

Scott Francis McTominay is a Scottish footballer who plays as a center midfielder for Manchester United and the national team of Scotland.

McTominay is a Manchester United youth academy product who made his senior team debut in May 2017.

Scott scored his first senior goal for Man U after coming in as a sub for superstar Paul Pogba. As he’s not yet on the list of the top 20 richest soccer players in the world right now, how much is Scott McTominay net worth?

Scott McTominay Net Worth and transfer worth

As of 2021, Scott Mctominay net worth is estimated to be $8 million.

In 2019 the midfielder signed a contract with Manchester United that nets him a whopping salary of 3 Million Euro (2.6 Million Pound) per year.

Scott McTominay’s Lifestyle and How He Spends His Money

He has a huge collection of cars and amongst them are a Mercedes, a Bentley and a fully customized Range Rover Sports Edition. He has often been seen in various different and expensive cars. The footballer has rich taste for Luxury and lavishness.

This Scottish football star was born into a middle-class family on 8th December 1996 in Lancaster, England.

He grew up with his sister Katie in England. This footballer started his youth career for Manchester United in 2002 when he was only six years old.

McTominay was associated with the Manchester United academy from the age of five after attending the club’s development centre in Preston.

Having played as a center-forward in the earlier years of his youth career, McTominay converted to a central midfield role under Warren Joyce.

He signed his first professional contract in July 2013 He made seven appearances for the Under-18s between 2013 and 2015, but struggled due to his small size.

McTominay missed most of the 2014–15 season due to injuries relating to growth and development issues, growing 10 inches within two years.

McTominay struggled again during the 2015–16 season, making 11 appearances across the Under-19s and Under-21s, but commanded a place in the team the following season with three goals in 21 games prior to his senior call-up.

On 30 April 2017, McTominay was named on the substitutes’ bench for a match against Swansea City in the Premier League.

He made his first Premier League appearance on 7 May, coming on as a substitute against Arsenal, before starting Manchester United’s final match of the season on 21 May, a 2–0 win at home to Crystal Palace.

Ahead of the 2017–18 season, McTominay was named as a member of Manchester United’s touring party for their pre-season tour of the United States, as well as for matches against Vålerenga and Sampdoria.

In the match against Vålerenga on 30th July 2017, McTominay came on as a substitute for Paul Pogba just after the hour mark, and 10 minutes later, he scored his first senior goal for the club – the third in a 3–0 win.

McTominay was born in England, but has Scottish ancestry and has stated he believes his international future will be with Scotland rather than his country of birth.

He has attended training camps with the Scottish youth sides but has not yet played for Scotland at any level.

In one of our favorite McTominay quotes, he once said; “My dad always taught me to never be satisfied, to want more and know that what is done is done.”

When the pressure was on him, the crowd asked him to make the wrong decisions.

However, even when the crowd asked him to do the wrong thing, He did the right thing. Everything he did on the pitch was correct.

It comes down to a few things: how bad you want it, what you do when things get hard, and whether you are able to stay focused amid turmoil, challenge, chaos and demands.”

Scott is included in the list of highest earners in Manchester United. He worked hard for his achievements, and currently. Scott McTominay  net worth is $8 million