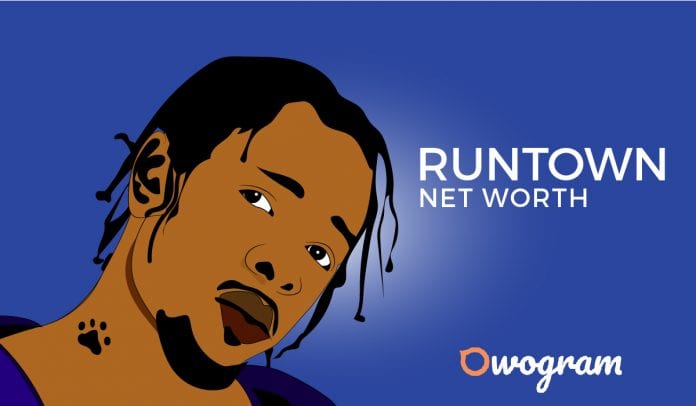 How much is RunTown net worth?

Ever since coming to the fore of the Nigerian audience in 2013, Runtown has not looked back since then. He has made different hit songs, had mind-blowing performances, and establish himself as a figure to reckon with in the Nigerian music industry.

The fact is that at the rate at which he has consistently delivered outstanding music to Nigeria and Africa at large, he’s not stopping anytime soon.

Having such a wonderful music career comes with many benefits which may be recognition, fame, awards, and most importantly, Finances. This brings us to the question of the true value of Runtown net worth.

Although, he isn’t listed as one of the top ten richest musicians in Nigeria, Runtown net worth is one of the most discussed by fans today. And given his popularity, Runtown’s net worth has been discussed by a wide fraction of music fans.

To have a correct estimate of Runtown net worth, it is important to consider the value of his music, his shows, concerts, endorsements, and many other factors that may contribute significantly his worth.

This article will consider these parameters and finally come up with an accurate estimation of Runtown net worth.

What Is Runtown Net Worth?

As of today, Runtown net worth is estimated at $2 million dollars. Here are some of his career achievements listed below:

Check out any of these top 10 Nigerian music websites to download Runtown’s songs.

Douglas Jack Agu popularly known as Runtown is a Nigerian singer-songwriter and producer.

Runtown was born on 19 August 1989 in Enugu but grew up partly in Abuja and Lagos, where he finished his primary education. After the death of his father, he moved to Abuja with his mother, who was working in the Ministry of Health.

Runtown made his first statement in the Nigerian music industry through his debut single titled Runtown.

It is a self-titled single produced by Soge. He was then convinced to move to Lagos by Phyno, a move that led to collaborations with the likes of J-Martins and Timaya in 2007.

The following year, he jointly established a record label named ‘Penthauze’ with Phyno. It is through this record label that he produced two songs, Party Like its 1980 and Activity Pikin respectively.

After the success of these singles, he proceeded to attend a Fashion school in America due to his affinity for Fashion. This is usually evident in most of his music videos which always portray different forms of fashion.

In 2015, Runtown released his debut studio album, Ghetto University by the Eric Many Entertainment through MTN Music Plus portal. With his progress, no doubt Runtown net worth had started to pick up.

Producers who worked with Runtown on the album include the likes of Shizzi, Maleek Berry, TSpize, ElPuto, DJ Maphorisa, Pheelz, Badr Makhlouki, Del B, and J Stunt. Music artists like Davido, Wizkid, and Uhuru made guest appearances in the album.

Related: How much is Davido and Wizkid net worth?

In the following year, he released Gallardo which featured vocals from Davido, cameo appearances from Patoranking, Skales and Phyno. The video for the song was directed by Clarence Peters.

Immediately after upload, millions of fans across Africa tuned in to enjoy the video, and it subsequently earned a spot as number one on MTV Base’s Official Naija Top 10 chart.

The Gallardo Album helped Runtown become one of the household names in the music industry in Nigeria.

Today, Runtown is not just a Nigerian artist but also an international star through top-class performance and impressive expression of talent. Today, Runtown net worth is no doubt a topic of discussion by music fans in Nigeria and worldwide.

How RunTown Spends His Money

Just like many other star celebrities in Nigeria, Runtown clearly loves the luxurious lifestyle which anyone can tell straightaway.

He boasts different mansions and fleets of supercars, all of which have his name engraved in them. Considering Runtown net worth, having all these luxurious properties is comfortable enough for him, as his earnings through music are huge enough to cover these expenses.

He acquired a Mercedes-Benz G – wagon and Lamborghini Gallardo which are some of the most expensive supercars many Nigerian musicians dreams of buying.

These automobiles sure cost a fortune, but with Runtown net worth, it probably peanuts. His home in Lagos is also a beauty to behold, as it is a mansion that features lots of luxury items. As most people say, what is the use of money if not for spending?

In one of the best Runtown quotes and sayings, he once said; “Stop sleeping. Secure the bag, so that the bag can secure you.” This shows Runtown is not a lazy type, he has worked hard to attain the heights he is today.

Related: Who is the biggest artiste in Nigeria today?

Summary of RunTown Net Worth

Runtown net worth of $2 million suggests how lucrative being a superstar musician in Nigeria is.

While most of his earnings have come through his music which is unique in its own self, he has earned loads through many endorsement deals which he bagged with huge corporations and firms over the last few years.

His talent in music and his dedication to succeed have proved to be pivotal in taking him to the position he is today. As expected, RunTown enjoys a life of luxury, a life which has been earned through his career in music.