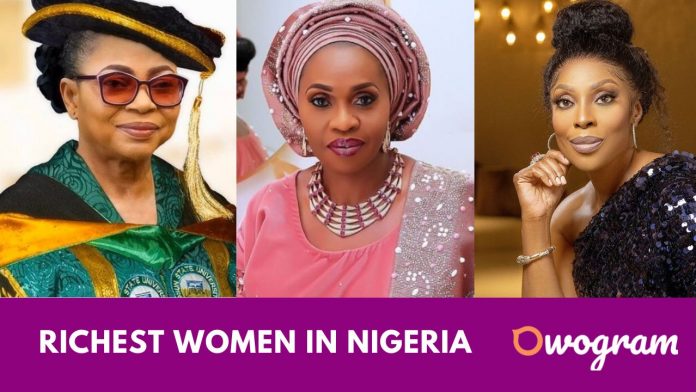 Who are the richest women in Nigeria today?

If you are keen to discover the names of top 10 richest Nigerian women, endeavor to read this article to the concluding line.

Over the last two decades, women all over the world, including the African continent, have made financial waves and contributed to the African economy. Without doubts, they have established great empires in various sectors including distribution, construction, food, manufacturing, energy, and agriculture.

As you will see further down this list, many women made their wealth through crude oil and another natural resource while some of them inherited their initial fortunes from their family’s past ventures or their spouses to make the top ten richest women in Nigeria.

What made these women hit these top spots is that they know how to use it, invest, and expand their wealth in multiple ventures.

We have written about the top 10 richest musicians in Nigeria and their net worth as well. You should check it out.

While a few of the names of the richest women in Nigeria will sound familiar to you, others will surprise you. Looking through the women with the biggest fortunes this year, our jaws dropped at their net worth.

Below is a list of Nigeria’s top 10 richest women currently making waves in the country and the world.

In this article, we are going to count them in descending order of their respective net worths.

After her education in the United States, she returned to Nigeria in 1992 and joined Shell Petroleum Development Corporation working in the estate’s area of operations in the Lagos office.

She also worked as an architectural consultant before she rose to the position of Head of Civil Infrastructures and then became Head of Corporate Issues and Crisis Management Unit in 1997.

She was appointed Transportation Minister in July 2007. On 23 December 2008, she became the Minister of Mines and Steel Development.

From expensive jewelry to tastefully built mansions, Diezani Alison Madueke is known to have lived a luxurious lifestyle while in office.

Ngozi Okonjo Iweala is a woman worth reading and knowing about. She has amassed wealth over the course of her career and thus enjoys the best life has to offer.

Ngozi Okonjo is a Nigerian economist, business consultant, politician, and international development specialist. Ngozi Okonjo is on the ninth position among the richest women in Nigeria, with a net worth of $550 million.

She earned a bachelor’s degree in economics from Harvard University in 1976 and a PhD from the Massachusetts Institute of Technology in 1981.

Ngozi Okonjo Iweala sits on the board of chairs of various high-profile organizations such as Twitter, Standard Chartered Bank, Rockefeller Foundation, African Risk Capacity, and Georgetown Institute for Women among others.

This woman is one of the richest women in Nigeria and Africa. She was once the Federal Minister of Aviation in Nigeria. Therefore, she also worked at NNPC and later created her own company, Sea Petroleum & Gas Company Limited.

She served as the campaign Director of Administration and Finance for former President Goodluck Jonathan who is one of the past presidents of Nigeria.

Stella Oduah-Ogiemwonyi is worth about $600 million.

Mosunmola Abudu is the founder of Ebonylife Television and Films. She was formerly a consultant in Human Resource Management before she took the bold step to mine the wealth in the Entertainment Industry.

Her interest in Media led her to become one of the richest women in Nigeria. She has earned a prestigious position in the nation, due to her innovative ideas.

Her Company is not restricted to Entertainment, but also the Movie Industry. Ebonylife Television is concerned with the creation of Entertainment content, while Ebonylife Films, handles the film production aspect.

In 2017, she was awarded one of the most powerful Nigerian women in Global Television. She is reported to be so hardworking and she regularly made the list of the top 10 richest women in Nigeria.

Bimbo Alase is a Yoruba businesswoman who married the late Kunle Arawole and was born in 1962. She is a Nigerian entrepreneur, investor, and businesswoman.

She studied at Pitman College and the Regent Academy of Design and Fine Arts in London. She also possesses a London Design School Post-Graduate Certificate in Interior Design. She is the chairman and CEO of Leatherworld.

Her company, Leatherworld, is a well-known luxury furniture company in Nigeria. Before launching her company in June 1994, she operated Glamour, a small gift boutique and beauty salon in Apapa, Lagos. Bimbo Alase is estimated to be worth over $750 million, making her one of the richest women in Nigeria

Stella Chinyelu Okoli was born on 1944. She is a Nigerian pharmacist and entrepreneur. After completing her basic school, she went on to Ogidi Girls Secondary School, where she completed her secondary education.

She was then transferred abroad to study pharmacy at the University of Bradford in the United Kingdom, where she finished with a Bachelor’s degree.

She is also believed to hold a Master’s degree in Biopharmaceutics from the prestigious University of London.  Dr. Stella Okoli is the founder of Emzor Pharmaceutical Industries Limited, a popular pharmaceutical company that has produced over 30 drugs that are consumed both in Nigeria and Africa today.

In January 1977, she established her pharmaceutical firm in Nigeria. Since its start, the firm has created over 50 distinct goods. In recognition of her achievements and contributions to the health sector in Nigeria, Stella was bestowed with the Member of the Order of the Niger award.

In 2012, she was honored at the 17th This Day Annual Awards. She is also a recipient of the ECOWAS International Gold Award. Dr. Stella Okoli’s net worth is now believed to be more than $800 million making her to be among the top richest women in Nigeria.

Fifi is the proud founder of the African Arts and Fashion Initiative, launched in 2013 at Dorchester Hotel in London. This initiative is aimed at promoting Africa as on the rise, displaying its rich cultural heritage and talent to the world, and as such creating opportunities for youth empowerment in Africa.

She is the Grand Patron of the Prestigious Icons Club of Dubai. Her subordinate company, Starcrest Associates majors in the design and construction of residential villas as well as estates.

The Abuja-based architect drives a Rolls-Royce Ghost worth ₦130 million which she bought to celebrate her birthday. When speaking of beauty and brains,  Fifi Ejindu is an individual that stands out on this list of richest women in Nigeria.

Senator Daisy Danjuma comes to mind most especially for the role she played in the protection of children as the Chairman of ECOWAS Parliament’s Women and Children’s Rights Committee and Senate Committee Chairman on Women Affairs and Youth Development at the senate. She was fierce, outspoken, intelligent, and glamorous.

Daisy began his career as an Executive Assistant for Nigerian Acceptances Limited (NAL) from 1977 to 1978. She was the Company Secretary/Legal Adviser for the Nigerian Television Authority (NTA) from 1982 until 1992. She was elected as a Senator in Nigeria in the Federal Republic of Nigeria (2003-2007) serving as Edo South’s Senator.

She was the director of the leading petroleum company, South Atlantic Petroleum (SAPETRO), and was appointed the chairperson of May & Baker Nigeria PLC, a leading pharmaceutical manufacturing company in 2019.

Daisy Danjuma whose worth is  $900 million also owns a private jet worth over $40 million. Her journey to the top to earn a place among the richest women in Nigeria was never a smooth one, but her consistency and dedication to her passion brought her deserved riches and wealth

She studied Accounting in the United States and Economics at Armstrong College, California. She is one of the most successful entrepreneurs, who began their journey to prominence by themselves.

She built her outstanding profile and developed her network singly. She is an ardent fashionista,  fashion investor, and with lots of investments in Oil and gas firms all across Africa.

Mrs. Folorunsho Alakija is a dynamic Nigerian businesswoman and philanthropist. She oversees several business endeavors such as FAMFA Oil Limited, and her family’s oil exploration and production business as the Vice Chairman, seeing to its strategic planning and day-to-day administration.

She has served her country Nigeria, as a member of several committees. She is an acclaimed public speaker and the first female to be appointed as Chancellor of a public university in Africa.

She is a prolific writer and has authored several inspirational books, including her autobiography. She is a board member of the Commonwealth Business Forum. She is a recipient of many awards in various capacities both locally and internationally.

She is currently estimated to be worth about $ 1 billion and has fully taken her place among the richest women in Nigeria today.

Alakija is rich enough to afford the luxuries of life such as exotic cars. One time, she bought four identical Mercedes-Benz G wagons for her four sons. She owns a customized Mercedes-Benz S Class worth ₦20 million.

The Richest Women In Nigeria 2022 (Summary)

What’s your take on this? The women in this article made it to the top and are recognized today, they acted differently and now they are stars” “Choose to be different, work towards achieving your dreams, the world can’t wait to see you shine”.

What did you think about the list of the richest women in Nigeria today? Let’s have your opinion in the comment box provided below.