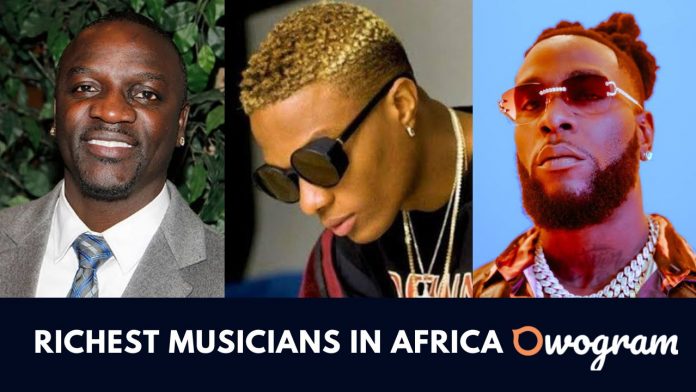 Who are the richest musicians in Africa as of 2022? If there’s one thing—among many others—that has placed Africa on the world map, it’s her music. Over the last decade, the African music industry has grown drastically.

This, however, results from the number of talented artists rising from different parts of the continent—putting smiles on people’s faces with their beats and lyrics.

Over the years, these musicians have worked tirelessly to release the best of songs across several genres that have aired globally.

What’s more? They’ve also moved on to become the richest musicians in Africa, with a significant net worth. Some of these artists include your faves. If you’d want to know more, to give you bragging rights over others, you’re just at the right place.

Without much further ado, here’s a list of the top 10 richest musicians in Africa, starting from the richest artist, including their age and net worth for the year 2022.

First on our list of the richest musicians in Africa is the legendary singer, songwriter and composer turned politician, businessman, and occasional actor—Youssou N’Doir. Youssou was born October 1, 1959, to Serer’s father and a Wolof mother.

Although he had been singing for a while, his career came to light in 1972 at age 13 when he sang a tribute song for the Late Papa Samba Diop, a leader of a prominent band in Dakar, Senegal.

The 62-year-old singer is known for his incredible vocal range. He also introduced the international audience to mbalax—a popular Senegalese music style. He’s currently the Forbes richest artist in Africa.

For most of Africa and Senegal, Youssou is perhaps the most famous singer alive, with a net worth of $145 million.

Second on the list of our top 10 richest musicians in Africa is Akon. The Senegalese-American singer, songwriter, record producer, actor, and entrepreneur was born in 1973 as Aliaune Damala Badara Akon Thiam.

His musical career took to the limelight after he released his single “Locked up“, the first from his album titled “trouble”, followed by his second single “lonely”,. Akon has sung and collaborated with several artists and sold over 35 million copies of his albums and songs.

Akon ranked first on the list of richest musicians in Africa for a while. However, he dropped to second on the list after he invested a chunk of his money into AKONCITY. The 48-year-old musician accrued his wealth from selling millions of albums and endorsement deals. He’s currently worth $80 million.

Born on March 11 1976, in South Africa as Nkosinathi Innocent Maphumulo, black coffee ranks third on our list of richest musicians in Africa.

The South African singer, songwriter, and producer who also doubles as a D.J., began his career in 1994 at the Durban University of Technology.

He has ever since sung and produced nine studio albums. These songs have earned him so much that he ranks third on our list of richest musicians in Africa.

He has received a reward for his work as a D.J., including the breakthrough D.J. of the year award in 2015 and best album of the year, among others. He owns his record label—Soulistic Music—where he has sung and produced these albums. He is aged 46 and has a net worth of $66 million.

Fourth on the list of richest musicians in Africa is one of Nigeria’s finest Ayodeji Ibrahim Balogun. Popularly known as Wizkid or Machala. Wizkid began his career at age 11 in a church. He used to be in a local band—glorious five.

Wizkid grew into the limelight after releasing his single “Holla at your boy” in 2011, along with other songs in his debut album ‘superstar’ under Banky W’s record label—Empire Mates Entertainment (E.M.E.) records.

No doubt wizkid is a talented singer. He has ever since moved on to sing more songs and bag several endorsement deals with M.T.N., U.B.A., Glo, and Pepsi, to mention a few. He’s 31 and has a Net Worth of $21 million.

Popularly known as Davido or Omo baba olowo, David Adeleke ranks fifth among our top 10 richest musicians in Africa. Despite his love for music and how well his hard work has paid off, David was born with a silver spoon to Dr Adedeji Adeleke in Atlanta, U.S.A.

He’s earned money from his music, sold-out shows, endorsement deals, and social media. He released his first album in 2012 and has since gone on to sing more songs. He is aged 29 and worth $20 million.

Collins Micheal Ajereh, popular as Don Jazzy, ranks 6th among our top 10 richest musicians in Africa. He was born in Umuahia, Abia state on November 26, 1982.

Don Jazzy began his musical career in 2004 when he collaborated with D’banj. The duo produced several records under Mo’hits records. In 2012, they parted ways, and Don Jazzy founded the now Mavin records.

He is well known for his talent-spotting abilities as he has announced several artists over the years, including Korede Bello, Ayra Starr, and Reekado Banks but to mention a few.

He is known for his excellent music production, hard work, and tenacity, which have helped him relate with artists in and out of the country. He’s 39 years old and has a net worth of $18 million.

Ranking 7th on our list of richest musicians in Africa is Damini Ebunoluwa Ogulu, popularly known as Burna Boy. He’s a singer, songwriter, rapper, and dancer. Burna was born in Port Harcourt but eventually moved to Lagos with his parents.

Burna boy rose to fame under Aristokrat records in 2012 with the release of his hit single “Like to Party” from his debut album L.I.F.E. However, in 2014, he left and founded his record label, Spaceship Entertainment, in 2015.

Ever since, he has sung and released several other songs that have made waves locally and internationally. He is 30 years old and is worth $17 million.

Innocent Ujah Idibia, popularly known as 2 Face or 2Baba, ranks 8th on our list of the top 10 richest musicians in Africa. 2Face was born on September 18, 1975. He began his musical career with the then Plantashun Boiz before going solo.

He is regarded as one of the industry’s oldest and most influential musicians. Through his career, suffice it to say that 2Face has indeed done well for himself. So much so that he’s ranked as part of the richest musicians in Africa. He’s aged 46 and is worth $16.5 million.

Paul Okoye, popularly known as Rude boy is a Nigerian musician that has gained fame throughout Nigeria and Africa. He started his career with his twin brother—Peter Okoye(Mr. P)—singing in school shows while attending music school. The duo was known as P-square.

They both released six albums that made rounds in the industry. However, the duo disbanded in 2017 and sought separate music careers. After the disbandment, Rude boy released several solos, including ‘Reason with me’, which yielded the highest number of YouTube views.

The 40-year-old currently ranks 9th among the top 10 richest musicians in Africa and is worth $16 million.

Finally on our list of the top 10 richest musicians in Africa is Inetimi Timaya Odon, known as Timaya. He is a Nigerian singer and songwriter from Odi, Bayelsa State.

Timaya began his career in 2005 as a backup singer for some musicians before going solo with his first single, “Dem mama”. Moving on, Timaya has sung other songs that have thrived and won him several awards, placing him on the list of richest musicians in Africa.

There you have it. These are the top 10 richest musicians in Africa, with some of your faves inclusive. These artists have undoubtedly worked hard to get to where they are. So we give them their flowers while we still can.