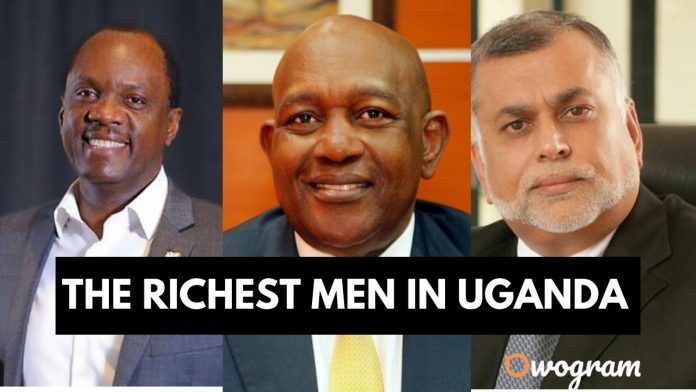 We bring to you the latest list of the top 10 richest men in Uganda and their net worth as of 2022! Yes, Uganda millionaires.

Uganda is an African country located in East-Central Africa with men and women making their living massively within the country. This article is aimed at bringing to you the top richest Ugandan men.

Uganda is well-known throughout the world for the production and exportation of a wide range of products, including fish, maize, sugar, cement, hides and skins, coffee, cocoa, beans, and a variety of other goods. The country also boasts a thriving economy that allows it to compete with other Rican countries.

As a result of the emergence of successful individuals in various sectors of the country, such as the top 10 richest musicians in Uganda, the top richest in football, the top richest in comedy, and so on, Uganda is undoubtedly advancing forward in its development.

The country’s economy received a significant boost in 2015 as a result of the exportation of its products.

Along with the exportation of raw materials, Uganda has seen steady growth in her economy over the years, particularly in the areas of crude oil and natural gas.

While on the other hand, agricultural production has made significant contributions to the expansion of the Ugandan economy as well.

Uganda, despite being one of the wealthiest and most developing African countries, has produced a large number of millionaires and billionaires over the years.

The fact that some of these wealthy personalities from Uganda have made it onto Forbes’ list of the world’s wealthiest people demonstrates that Uganda has made significant strides in its economy, to the point where it is competing with and surpassing other African countries.

Uganda had a per capita income of approximately US$650 per year in 1999, according to the World Bank.

In 2013, an estimated 19.5 percent of Uganda’s 35 million people lived on less than US$1.00 per day, according to government estimates.

In light of the influx of some of the world’s wealthiest individuals who have emerged from Uganda, this article has set out to provide you with a list of the top ten richest men in Uganda, ranked by their net worth, in order to assist you in your financial planning.

Mukesh was born in Arua, Arua District in 1962.

He has established companies organized under the Shumuk Group.

Some of the businesses include a money lending business, a milk processing plant, a foreign exchange bureau, and many others.

Mukesh Shukla is also a politician and had contested in  2016  for the position of chairman of the ruling National Resistance Movement against incumbent Hassan Bassajjabalaba.

Mukesh is believed to have amassed wealth from his various companies.

Patrick Bitature is our number nine pick among the richest men in Uganda.

Patrick Bitature is also the founder and CEO of Protea Hotels in EAST Africa, he is considered one of the richest men in Uganda according to Forbes.

Like many other business tycoons in the country, Gordon has invested in numerous companies including Wavah Water Limited, GM Tumpeco Limited, Wavah FM, and many others.

He was also awarded an honorary doctorate from Makerere University.

His philanthropic lifestyle has been evident in the country, as he has donated numerous materials to various clubs and organizations in the country.

More to that, he is regarded as an investor with his investments in sectors such as the media and banking sectors.

Aaron Mukooza currently sits on a staggering net worth of $200 Million, which earns him a spot among the richest men in Uganda.

Sikander happens to be one of the oldest Ugandan entrepreneurs.

He is the founder of Roofing Groups and was born on October 4, 1944, in Uganda.

Sikander is not only an industrialist, but he is also a pathologist who started as a dealer in a retail electronics store that specialized in the purchase and sales of Philips Brand IN Kigali.

He was also a distributor of tyres in Rwanda.

For 20 years now, since its inception, Sikander has established the steel-manufacturing group of companies in Nigeria which comprises three distinct factories.

Charles Mbire is one of Uganda’s richest native.

Like many of Uganda’s richest men of foreign roots, Charles Mbire who is An entrepreneur and investor was born in 1959 in Mparo, Rukiga District.

Among the table posts Charles held, he was chairman of the Uganda Securities Exchange in 2010, a member of the Presidential Investor Roundtable, which includes an elite group of businesspeople advising the President of Uganda on how to best improve the competitiveness and business conditions of the country.

His investments have spanned a wide variety of industries including pharmaceuticals, energy, real estate, agribusiness, telecommunications, and finance.

As a Ugandan business tycoon and investor, he has made huge investments in sectors such as real estate, manufacturing, transportation, and many others.

He is currently the chairman and the major shareholder of the Aya Group of companies.

Mohammed Hamid was born in 1976 and was the second richest African under 40 after Mohammed Dewji, a Tanzanian.

He worked with his older brother in the early 1990s until he started his first company called Pan Afric Commodities, which is also a commodities trading company.

He then acquired one of Sudhir Ruparelia’s milling machines from Premiere Mills.

He is not only an active businessman and entrepreneur but also a philanthropist, which is supported by the enormous monetary and material donations that he has made in this context.

With the speed at which his fortune grows, he may well move out of fourth place in the years to come.

Alykhan Kharmaji is another prominent industrialist who founded the Mukwano Group of Companies.

He has major investments in manufacturing and banking and had served as a non-executive director of Exim Bank, a commercial Bank in Uganda.

During his tenure as the non-executive director of Exim Bank, Alykhan has helped the company to maintain an impressive 36.5% share gilding.

Karim Hijri is generally seen In Uganda as the driving force behind the Dembe Group of Companies.

He is a business magnate who has been venturing into textile and alcoholic beverages trading from a shop in Luwum Street, Kampala which later gave birth to Dembe Enterprise before expanding into what is currently known as Dembe Group of Companies.

His net worth amounts to $800 million, making him the second richest man in Uganda.

Sudhir Ruparelia is currently the richest man in Uganda, with a net worth of $1.2 billion.

Ranking number one on the top ten list of richest Ugandan milionaires is the founder, CEO, and major shareholder of Ruparelias Group of Companies, Sudhir Ruparelias.

He also has interests in other sectors of the Ugandan economy such as insurance, broadcasting, real estate, education, floriculture, banking, hotels, and resorts.

Ruparelia was presented with an Honorary Consul of the Republic of Nepal to Uganda, by Bidhya Devi Bhandari, the president of Nepal in 2020.

Indeed Uganda as a part of East-Central Africa is thriving in its economy.

The ten richest men presented in this article have had their share in the progress of the Ugandan economy.

Here is a recap of the richest men in Uganda.