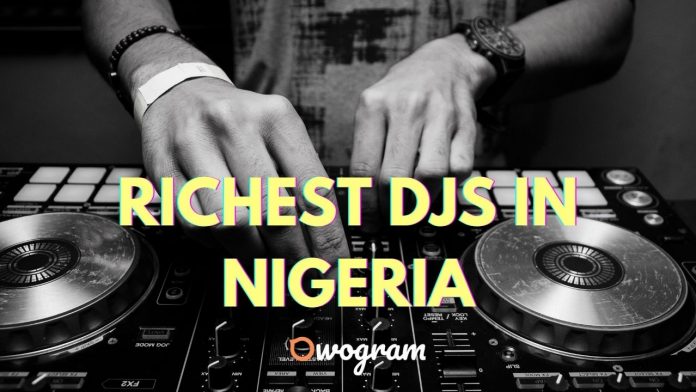 WE bring to you the latest list of the top 10 richest Djs in Nigeria and their current net worth in 2021.

Do you know that there are some Disc Jockeys (DJs) in Nigeria that have established themselves to become a force to reckon with in the entertainment industry?

Gone are the days when Disc Jockey as a profession, was looked down on.

Presently DJs are the most patronized entertainers in Nigeria.

Imagine organizing a show or an event without hiring a DJ to spice up your event, with cool mixtapes, I mean the event will be very boring to those invited to the events or show.

This explains why some Nigerian Djs are really making it big in the Nigerian entertainment industry.

To some extent, there are some DJs who are richer than most Nigerian musicians.

It takes hard work and skill to be able to know how to create mixtapes that will achieve immense commercial success.

In Nigeria, there are many successful Djs who charge heavily for their services, how many of them can you list?

Well, in this article you will be thrilled to know who makes the list of 15 richest DJs in Nigeria.

For one, some of the DJs that have made it big in the Nigerian entertainment industry, have achieved such feat through the record label they signed to.

Some of the DJs on this list belong to some of the prominent record labels which has paved the way for them to showcase their craft to the world.

Some of these DJs have even worked on several projects with Foreign musicians, even performing overseas, and are paid heavily for their talents.

Without any further ado, we proceed to the top 15 richest Djs IN Nigeria, I bet you will be surprised to find out who make up the list.

Big N is the in house DJ of Marvin’s records who began his Disc Jockey career in the UK where he used to perform at local clubs in the West Midlands prior to performing at the Palms Club in Coventry as a guest DJ and also as a guest DJ at Club “Release”.

He has produced several mixtapes for Mavins records including the label’s theme song titled  “Mavin All-Stars”, “Energy Mixtape” and so on.

Big N has also been on tours with some of the top artists in the record label including supporting Tiwa Savage on her first American Tour.

He is currently one of the most successful and richest Djs in Nigeria with a net worth of $250,000.

Making it to the list is the famous produce and DJ, DJ Enimoney happens to be the younger brother to one of the most successful and richest Nigerian musicians, Olamide Baddo.

Enimoney, whose birth name is Eniola Olamilekan Adedeji, is the official DJ of his brother Olamide’s owned record label, YBNL.

Although formally a DJ, Enimoney also knows how to handle the mic, as he has released his own songs where he has featured several notable artists such as Olamide (his brother), Tiwa Savage, Reakado Banks etc.

Some of his hit singles are “People Talk Alot (P.T.A)”,  Diet, Ogede(his new release), Wapka, and many others.

He has also been nominated severally and was the recipient of the City People Music Award in 2018, for Best Collaboration of the Year through the song “Diet”.

Being one of the richest DJs in Nigeria currently, DJ Enimoney currently has a net worth of $350,000.

DJ Consequence is also one of the most prominent Djs in Nigeria who has been making wave in the music industry.

A native of Ondo state, though grew up in Lagos State, Akeredolu Precious Pelumi whose career name is DJ Consequence has released over 30 songs and mixtapes with two albums titled, Vibes from the Future and VIBES – The Mixtape.

He started performing at local clubs, parties, and events in Lagos State.

Through hard work and dedication, the popular DJ who was the recipient of the City People Music Award for DJ of the Year (Male) has been ranked among the richest Djs in Nigeria.

In the entertainment industry, particularly music, every artist or Entertainer always try to come up with his own style to make him distinct and unique.

Thomas Amar-Aigbe who is popularly known as DJ Sose is one of such entertainers.

Even if you may not know him by name, you would definitely know him in person, as he is the only DJ in Nigeria and Africa who has a facial tattoo.

When asked why he tattooed his face this was his response “My face tattoo is my trademark– a marketing strategy to make me stand out. … You can forget my name but you can never forget my face.”

The 2011 recipient of the FAB Awards DJ Of The Year nominee and Nigerian Radio Awards Best DJ Nominee, is signed to Gray Tiger Entertainment where he has been making his present felt in the Nigerian music industry.

He is worth $500,000 ranking him among the most successful and wealthiest Djs in Nigeria.

The second female DJ to make it to the list is award winning DJ, DJ Lambo.

As far as entertainment in Nigeria is concerned, DJ Lambo is one of the forces to reckon with as she has performed live at Nigeria’s popular show, The BigBrother Naija (BBN), three consecutive times.

The City People Entertainment Awards for DJ of the Year award winner, released her personal album titled A Tale of Two Cities and was listed among the top five Djs to watch out for in 2015, by Nigerian Entertainment Today.

She charges heavily for her services and her current net worth is estimated to be around $500,000.

DJ Caise is another successful DJ in the Nigerian music industry.

Born Derin Phillips, DJ Caise may not be very familiar to many, but one thing is for sure, he is making it big time in the industry.

Signed to Chocolate city, DJ Caise who has an estimated net worth of $550,000, has produced various mixtapes which span various genres of music such as, Old School, Hip hop, Funky House, House music, and Afro beats.

He is among the few DJs in Nigeria that made Disc Jockeying a profession to be held in high esteem.

Highly regarded as one of the three pioneer hip hop Djs in Nigeria, the 55-year-old award-winning DJ who started off as a rapper, is famous for his Jimmy’s Jump Off concert which began in 2008.

Today, Jimmy’s Jump Off concert is one of the most attended shows in Nigeria.

Despite the fact that he is not really active as before, DJ Jimmy Jatt is making his millions from other businesses and endorsements, as well as from his concert.

Jimmy was presented with the Hip Hop World Hall of Fame award for his contributions to hip hop on Nigeria, in 2006.

Another prominent DJ on this list is the CEO of KayWise Entertainment, is DJ Kaywise.

He stepped into the spotlight in 2010 after his debut mixtape stormed the Alaba market.

Kaywise who has a twin has won several awards including the City People Entertainment Awards for DJ of the Year, 2015.

He also won the Nigerian Entertainment Awards for DJ of the Year, that same year.

Though not among the top five richest DJs in Nigeria, the name DJ Spinall is one of the names that come to mind when talking about popular DJs, due to his style of play and his signature dressing.

He is the only DJ known for his unique dressing that requires him to wear a native or Ankara hat with any type of dressing.

Some of his songs are listed below ;

DJ Humility is one DJ that is quietly making his money without blowing his trumpet, he rather allows his talents and what he knows how to do best, to do the talking.

DJ Humility who has spent over two decades in the entertainment industry as a Disc Jockey, is the founder H.Records.

He currently works as an in-house DJ of Rhythm 93.7 FM Lagos and the pioneer of the released annual Disc Jockeying event; Classic DJs.

He has also released three albums that have won him several awards such as Best World DJ NEA, and FAB Magazine’s DJ of the year.

He makes his fortune also from other ventures.

DJ Neptune is a popular DJ in the Nigerian music industry. He’s no doubt one of the richest Djs in Nigeria.

He has worked with several top musicians in Nigeria like Burnaboy, Olamide, Joeboy, Phyno, and many others.

He is the CEO of Neptune Entertainment.

He also has eight awards for his name and has also released eight songs.

He is one of the richest and most successful Djs in Nigeria.

The DJ with a touch of gold dye on one part of his hair, DJ Ecool is a popular DJ, Signed to DMW (Davido Music Worldwide).

Ecool has released over 13 mixtapes with more than five hit singles one of them being “ADA”.

The hit track “ADA” which was released in 2017, where DJ Ecool featured his boss Davido, recorded great commercial success and had over 2 million views in less than a month.

Most of his mixtapes feature some foreign artists as well as Nigerian artists.

The second female DJ on the list and also one of the richest Djs in Nigeria, DJ Cuppy is not an unfamiliar personality in the Nigerian music industry and in Nigeria as a whole.

One of the four daughters born to Nigeria’s business mogul and oil magnate, Femi Otedola, DJ Cuppy is a very successful Nigeria DJ who has released over 12 albums that features some notable actists including foreign artists like Wyclef Jean.

The pink hair DJ is the richest female DJ and one of the richest DJs currently, with a ground-shaking net worth of $1.7million.

DJ Coublon may not be a trending name in the music industry, but one undeniable fact is that he is the second richest DJ In Nigeria.

DJ coublon has over the years, worked with many prominent musicians in Nigeria, including Kiss Daniel, Iyanya, Yemi Alade, Tekno Miles, Patoranking, and so on.

DJ Coublon also has two awards to his name.

Taking the number one spot on the top ten richest Djs in Nigeria’s list is the award-winning DJ Xclusive.

Since then, he has shown no signs of slowing down.

He has released over 17 hit singles with commercial success.

Since then, he has grown to become the richest DJ, with a net worth of $2.1 million.

Counting many years back, the work of a DJ was always looked down upon, in fact, it was one of the professions that many refused to indulge in.

After considering the 15 richest Djs in Nigeria by their net worth, you would agree with me that these Djs have done great for themselves, thereby Making Disc Jockey a well-paying job and also one of the successful professions in the entertainment industry.

Below is a recap of the top 15 richest Nigerian Djs;