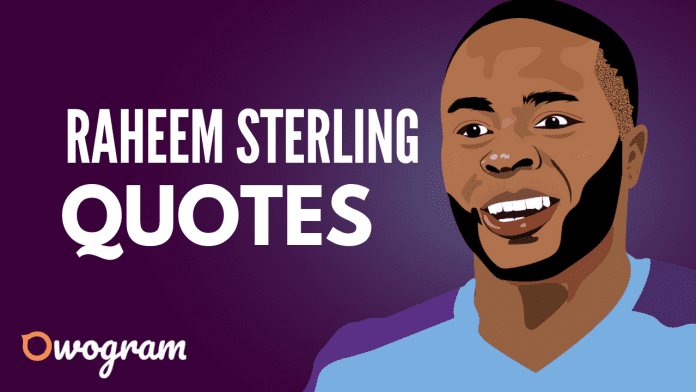 In this quick piece, we bring to you a collection of 40 Raheem Sterling quotes about football and life.

Sterling, as he is called for short is one of the English football players who has enjoyed the glorious moments of winning the English Premier League, not once but twice!

Sterling was born in the Maverley district of Kingston, Jamaica, and spent his early years there. Today, he is no doubt one of the most talked-about footballers in the world.

Starting from zero to attaining such heights that many envy, Raheem Sterling net worth is proof that he is a successful footballer, in stats, cash, and kind.

How did he make it this far? In this piece about Raheem Sterling quotes and sayings about life and football, you’ll learn more about his motivation, what kept him going, and his beliefs.

1. “Footballers need to be aware kids look up to them.” Raheem Sterling

2. “Performing for my dad does drive me on. Especially in big games, massive games.” Raheem Sterling

3. “If you want your country to do well as everyone says, bring a positive light to it.” Raheem Sterling quotes

4. “There’s a perception in certain parts of the media that I love ‘bling.’ I love diamonds. I love to show off. I really don’t understand where that comes from.” Raheem Sterling

5. “I’ve got that face. You know when you see someone on TV and go, ‘I don’t like him?’ Some people have that face, and I’ve got it. I can’t do anything about it.” Raheem Sterling

6. “Forget what everybody says. I know what I want to do and what I need to improve on. Nobody needs to tell me.” Raheem Sterling

7. “I just want to be seen as a kid who loves to play football and to do the best for the team.” Raheem Sterling quotes

8. “England is still a place where a naughty boy who comes from nothing can live his dream.” Raheem Sterling

9. “I don’t talk about how many cars I’m going to drive, how many houses I’ve got. I just purely want to be the best I can be.” Raheem Sterling

10. “I am always analysing myself; I am always critical of myself and always trying to improve.” Raheem Sterling

11. “A few years ago, I would let it get to me. But now, as long as my mum and my sister and my kids don’t have any stress, I’m good.” Raheem Sterling

12. “It’s never been about money. I talk about winning trophies throughout my career. That’s all I talk about.” Raheem Sterling

14. “If people want to write about my mum’s bathroom in her house, all I have to tell you is that 15 years ago, we were cleaning toilets in Stonebridge and getting breakfast out of the vending machine. If anybody deserves to be happy, it’s my mum.” Raheem Sterling

15. “I try to get better in every aspect of my life, not just on the football field. I am competitive, and I just want to always get better.” Raheem Sterling

17. “I don’t want to be the one that says Liverpool can go on and win the league. But there’s a real belief and togetherness in the squad; we’re all working for each other. We all know what the dream is at the end of it.” Raheem Sterling

18. “I don’t think I’m the most confident person, but I have people around me who, while they don’t say I am the greatest thing in football, have a general belief in me.” Raheem Sterling

19. “It’s always an honour to put on an England shirt, but this one is different – it makes you really feel fast; plus, it’s light and fits nicely.” Raheem Sterling

20. “When I got the ball in the reserves, within two touches I would turn and look to attack my opponent, whereas in the first team, I was trying for the safer option. I needed to go back to basics. I needed to get defenders on the back foot again.” Raheem Sterling quotes

21. “I’ve come to a point in my career where it doesn’t matter if I dribble or nutmeg someone. The only thing that matters is whether I was decisive, did I put the ball in the back of the net today, and did it help the team win.” Raheem Sterling

22. “For a few years, we lived with our grandmother in Kingston, and I remember watching the other kids with their mums and just feeling really jealous. I didn’t fully understand what my mum was doing for us. I just knew that she was gone. My grandma was amazing, but everybody wants their mum at that age.” Raheem Sterling

23. “I grew up five minutes from the stadium and watched it being built. I’d play football right outside and look up at this huge stadium with all the cranes and building work and think, ‘One day, when it’s finished, I need to be playing in here.’” Raheem Sterling

24. “I’m sorry to say it, but we have to be more arrogant and more streetwise because we are coming up against some great teams who have that streetwise mentality. They bring their play into it: you do what you have to do to win a game. Simple as that. Be streetwise and clever.” Raheem Sterling

25. “Thank God I had football. I remember when it used to rain, all the kids would run outside and play football in the puddles, just splashing around, having the best time.” Raheem Sterling quotes

26. “A quarter-final won’t be good enough at all, because we want to win it.” Raheem Sterling

27. “Growing up, you watch players like Ronaldinho playing in World Cups, doing the business, and you idolise these people.” Raheem Sterling

28. “Something good happens or something bad, I think, ‘What can I do better? What didn’t I do this year?’” Raheem Sterling

29. “I’m trying to make the box, trying to be more ruthless, more clinical, and trying to decide games.” Raheem Sterling

30. “I’ve learned how to deal with pressure more. I’m still trying to achieve more in my game and add more to it. I feel like I’m still learning every day, and I want to keep on improving.” Raheem Sterling

32. “Some things that started in pre-season and then, you know what, the season gets started, you kind of forget about it and then move on to football, and it’s strictly football until the season finishes.” Raheem Sterling quotes

33. “I’ve got a massive opportunity here with a great bunch of players to represent England at a World Cup; that’s my biggest focus now.” Raheem Sterling

34. “It’s something I’ve always wanted to do: wear the number 10 for England.” Raheem Sterling

36. “When it rains, nobody hides inside. You just go out and enjoy it. The other thing I remember is begging my grandmother for money to go and get a grapenut ice cream.” Raheem Sterling

37. “If I lose the ball, I want to get on it as quickly as possible and make up for it, whereas before, I would hide away and maybe only look for the ball 10 minutes later. I don’t want to give the defenders any break.” Raheem Sterling

38. “When the time is right I have a laugh and a joke with my friends on a day off, but I have had to make sacrifices, and in that sense it’s been a huge step forward, completely different to how it was before. I was 18 when the manager spoke to me. I realised I’m not like any other teenager. I can’t be doing stuff any other 18 or 19-year-old was doing.” Raheem Sterling quotes

40. “I just want to take the time to think about what I’ve achieved in my career so far, where I need to go, and what I need to do to get better as a player.” Raheem Sterling

42. “I’m still short now, but when I was 14, I was like a pencil. You had to be aggressive and hold your own.” Raheem Sterling

43. “One of my friends, Bruno Andrade, was so quick, he just used to knock the ball past whoever he was playing against, and I thought, ‘Why can’t I do that?’ Until then, I would try to dribble and maybe try a stepover, but Andre would just knock it then – beep, beep – and he was so fast, he would get there first.” Raheem Sterling quotes

44. “My mum thinks she knows her football. She’ll certainly tell me when I’m not doing something right. At other times, she’ll say I’m not listening to her. There’s been a few clashes with her.” Raheem Sterling

45. “I was looking at the sights, thinking, ‘I used to play there a couple of years back, and now I’m on the couch with the England team.’” Raheem Sterling

Thanks for checking out these sayings and quotes from Raheem Sterling. Which of these can you relate to? Let’s have your comment in the section provided below. 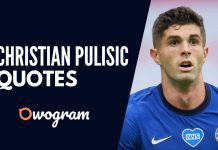