Home The Watch Full List Of Political Parties In Nigeria 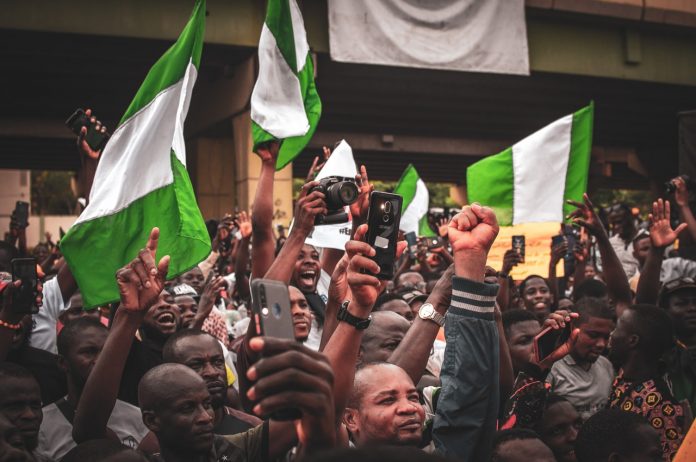 Here’s the full List Of 18 Political Parties In Nigeria 2022.

Political parties are the vehicles by which representatives of the people are elected in a democratic government. They offer choices to the masses and give them reasons to make informed decisions on the people they should pick to represent them.

These political parties are mandated by the country’s highest electoral body, the Independent National Electoral Commission (INEC) to conduct party primaries across the country in order to field candidates for all political offices.

Political parties make use of their structures (Federal, State, LGA, and Ward) to vie for these seats, and on occasion, win.

History Of Political Parties In Nigeria

In 1959 when Nigeria was nearing independence from British colonial rule, the question of forming and making up a democratic rule came up.

Three political parties were created in response to that question; the National Council of Nigeria and the Cameroons (NCNC) led by Nnamdi Azikiwe, who is on the list of all Nigerian Presidents since 1960, Northern People’s Congress (NPC) led by Ahmadu Bello, Action Group (AG) led by Obafemi Awolowo.

These parties offered up candidates to be elected into positions in the various levels/offices involved with the governing of the budding nation. The first elections were held with the parties and their candidates on the ballot.

After independence, outside of the many military takeovers of power, democracy spread like a fever in the country, and it led to the formation of many more political parties across the nation with varying ideologies and positions with people eager to bring positive change and improvement to the nation.

Year after year, the registration of new political organizations grew. Coalitions were made and broken, and they kept coming. By August 2018, twenty-three (23) new political parties were registered by the Independent National Electoral Commission (INEC), bringing the total number of registered parties to ninety-one (91).

From that time to the following two years, the public was outspoken about the needlessness of that many political parties. Notable among those voices was that of the Director-General, National Institute for Legislative and Democratic Studies (NILDS), Prof. Abubakar Sulaiman who said that having ninety-one registered parties was simply too unwieldy for the nation.

Finally, in February 2020, the Professor Mahmood Yakubu-led INEC, vested with power from the amended 1999 constitution to register and regulate activities of political parties, announced the de-registration of seventy-four (74) out of the ninety-two (92) registered political parties in the country.

It was put out that the parties were de-registered for their failure to meet up to requirements for their existence based on Section 225A of the 1999 Constitution (as amended). The country was then left with eighteen (18) political parties. All of which exist up to the time of the writing of this article.

Here is a list of all the registered and recognized political parties in Nigeria in 2022 in alphabetic order along with their slogan, pictures, and some basic information about them.

The Accord party was founded by Senator Rasidi Ladoja, a formate governor of Oyo state.

Today, its National Chairman is Honorable Mohammad Lawal Nalado and its National Secretary is Honorable Adebukola Abiola Ajaja. The party is headquartered in Abuja at No. 15 Jos Street, Area 3, Garki Abuja. Their slogan is “Oneness and Progress”.

Action Alliance was founded in 2005 by Governor Rochas Okorocha of Imo State at the time. He planned to use the platform to run for president in the 2007 national elections.

Its National Chairman is Honorable Adekunle Rufai Omoaje. Ambassador Suleiman Abdulrasheed is its National Secretary. Their headquarters is at Plot 1977, Orlu Street, Area 3, Garki, Abuja. They can be reached by their email at actionalliancenational@gmail.com. Their slogan is “Let the Masses Live”.

Related: Tales of Democrazy in Nigeria

Founded in 2018 by Omoyele Sowore as part of efforts geared toward contesting the 2019 general elections, African Action Congress is chaired by its founder, Omoyele Sowore who was reinstated in June 2022 following a Court of Appeal Judgment that removed Dr. Leonard Nzenwa as chairman.

The party has Ina Okopi-Aqu for its Secretary. Their headquarters is at Office 011, Bolingo Hotel & Towers, (Office Block), Plot 777 Independent Avenue, besides American Embassy, Central Business Direct, Abuja. The party slogan is “Take it Back-Action”.

When it was formed in 2005, the party was named Alliance for Democratic Change. It was renamed when the party was registered officially with INEC.

The party has Chief Ralph Okey Nwosu as its National Chairman and Alh. Said Baba Abdullahi as its National Secretary. In Abuja, the party’s address is No. 1 Capital Plaza, Nyanyan-Kuru Road, Abuja. Their slogan is “Arise and Shine”.

This party was founded in 2017 by concerned individuals to be a third force to counter the top parties in the country at the time; APC and PDP. Engr. Yabayi V. Sani is the party’s National Chairman and Dr. James Okoroma is its National Secretary.

They are headquartered at Plot 3379A, Mungo Park Close, Off Jesse Jackson, Asokoro New Extension, Abuja. Their slogan is “One Destiny”.

The Action People’s Party is chaired by Uchenna Nnadi and has Abu Ibrahim Sossan as its National Secretary. Their headquarters is at 6, Alexander Crescent, Behind Banex Plaza, Wuse II, Abuja. Their slogan is “Strong Economy, United Nigeria”

The All Progressives Congress is one of the two major political parties in Nigeria. They have a sitting president in office in the person of H.E Muhammadu Buhari who came to power in the 2015 general elections after taking over from the incumbent PDP.

APC was founded in 2013 when three major opposition parties; Action Congress of Nigeria (ACN), Congress for Progressive Change (CPC), and All Nigeria People’s Party (ANPP), came together to form a coalition that would go against the then party in power, People’s Democratic Party (PDP).

The National Chairman of this party is H.E Senator Abdullahi Adamu. Senator Otunba Iyiola Omisore is the National Secretary. The party is headquartered at No. 40 Blantyre Street, Wuse II, Abuja, Nigeria. Their slogan is “Change”.

This party was formed in 2002 by Chekwas Okorie. It boasts of the late Dim Odumegwu-Ojukwu as a one-time presidential candidate in the 2003 elections which he failed to win.

Related: List of all 36 States and Capitals in Nigeria

APM was registered as a political party in 2018. Its current National Chairman is Yusuf Mamman Dantalle. The National Secretary is Oyadeyi Ayodele Adebayo.

BOOT means Because Of Our Tomorrow. The National Chairman of the party is Adenuga Sunday and the National Secretary is Egwuatu Maryann C. The party is headquartered at House 11 Road C1 F.H.A Karu Abuja.

The Labour Party is a registered political party in Nigeria formerly known as Party for Social Democracy. It was created in 2002. Before 2022, the party had no members in positions of power in government.

However, after the presidential candidacy of Peter Obi was announced under the party’s platform, support multiplied, and two sitting Senators defected to the party.

The party’s National Chairman is Barrister Julius Abure and its Secretary is Alhaji Umar Farouk Ibrahim’ The party is headquartered at 29 Oke Agbe Street, Off Ladoke Akintola Boulevard, Garki II Abuja FCT. Their slogan is “Equal Opportunity and Social Justice”.

The NRM is a party with the aim to rescue Nigeria from the hold of the two top political parties in the country. They claim that if elected into power, they will do things differently and ensure the growth and smooth running of the country.

Its National Chairman is Hon. (AMB) Isaac Chidozie Udeh and its National Secretary is Alh. Danbuba Mohammed. They are headquartered at Khadijat Labaran House, Plot No. 1346, Ahmadu Bello Way, Garki 2, Abuja FCT. Their slogan is “Together We Can Rescue Our Nation, Nigeria”.

The New Nigeria People’s Party was founded by Boniface Aniebonam in 2000, but the party became operational in 2001. The party previously had only Kano state as a stronghold and not much of one at that.

In recent times, however, especially after the defection of former Kano governor, defense minister, and ambassador, Sen. Rabiu Kwankwaso from the PDP, the party has recorded an influx of new members.

High-profile defections from both the APC and PDP alike from within Kano state and other states of the federation. Its National Chairman is Prof. Rufai Ahmed Alkali and its National Secretary is Mr. Dipo Olayoku.

The party boasts of offices in all the 36 states of the federation but is headquartered at 11 Mahatma Gandhi Street, Area 11, Abuja, Nigeria. Their slogan is “Peace, Equity and Progress”.

Founded in August 1998, the People’s Democratic party participated in the 1999 general elections with the former head of state, Olusegun Obasanjo, freshly released from detention as a political prisoner as its flag bearer for the presidential race.

He ran with Atiku Abubakar on the ticket, and the newly minted party won. The party went on to win every presidential election until 2011, finally getting ousted by a newly formed APC as well, bringing their hold on the top job to a total of sixteen years (16).

In its long years in and out of power, the PDP has managed to create deep-rooted structures in every part of the country, with offices in every state, local government area, and even at the ward levels. They are headquartered at Plot 1970 Wadata Plaza, Michael Okpara Way, Wuse Zone 5, Abuja.

The People’s Redemption Party was founded in September 1978 by Aminu Kano. Its current National Chairman is Mallam Falalu Bello, OFR and its National Secretary is Comrade Babatunde F. Alli.

Their headquarters is located at No. 8, Ogbabi Street, Adjacent Military Police Headquarter, Garki 2, Abuja. Their slogan is “Victory”.

The party was created by the former military president, Ibrahim Babangida in December 1989 alongside the NRC as part of efforts to form two detribalized political parties in a bi-political system.

The party calls for organized attempts to better the welfare of the country’s citizenry and fight for social justice. Alh. Shehu Gabam is the party’s National Chairman, while Dr. Olu Ogunloye is the National Secretary. They are headquartered at 16 Nairobi street, Off Parakou Estate, Wuse II, Abuja. Their slogan is “Progress”.

The YPP was registered as a political party in June 2017. It started as a movement in 2016 that eventually grew to be worthy of becoming a party that had the young people at the center of its ideas to bring positive change and development to an ailing country.

It was also created to challenge the two major parties in the country; APC and PDP. Their founder and National Chairman is Comrade Bishop Amakiri. Their National Secretary is Barr. Vidiyeno Bamaiyi. They have their headquarters at Block 10, Flat No. 1 Benue Crescent, Area 1, Garki Abuja. Their slogan is “Shape The Future”.

Zenith Labour Party was founded with the aim to nurture, preserve and foster unconditional support for the rights, liberties, and aspirations of all Nigerian citizens.

Its National Chairman is Chief Dan Nwanyanwu who also doubles as its Presidential Candidate for the 2023 general elections. Its National Secretary is Yahaya Makama. They are headquartered in Plot 73, Ladoja Akintola, Suit 206 Dabo Plaza, Garki Abuja, and their slogan is “Equity, Justice, and Religion”.

Summary of the Registered Political Parties in Nigeria

Up till the year 2020, Nigeria had over 90 different parties. In spite of this, there are now fewer than 20 of them as a result of a decision made by the Independent National Electoral Commission (INEC) to deregister every party in the country that does not adhere to the conditions outlined in the constitution.

What did you think about the approved political parties in Nigeria today? Let’s have your comments in the box provided below.