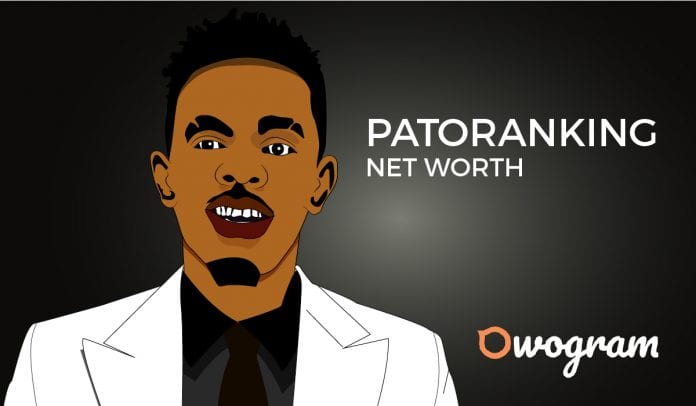 What is Patoranking net worth?

This article is set at bringing you relevant information about Patoranking net worth apart from what you see on stage.

He was born and raised in Ijegun-Egba Satellite Town, Patoranking originated from Onicha.

Patoranking Net Worth and Highlights

Patoranking Net Worth is currently estimated at $11.8 Million. Still, he’s not on the latest rankings of the top ten richest Nigerian singers.

Here are the best highlights of Patoranking’s career

Most of the Patoranking net worth comes from endorsement and companies.

He appears to be doing very well for himself having fully broken into the international dancehall music scene.

He currently lives in a townhouse in Metro Garden, Lekki, Lagos State. His home boasts a recording studio which makes his work very easy.

He also has a number of luxury cars which include a 2014 Range Rover SUV, a red Porsche, and a Mercedes G Wagon.

Patoranking was born Patrick Nnaemeka Okorie in Ijegun-Egba, Alimosho, Lagos State on the 27th of May, 1990 to a family originally from Ebonyi state.

His stage name was coined from his first name Patrick. It was given to him by one Jamaican artist whom he met at Alpha Beach in Lagos.

He grew up with his family in Ijegun-Egba Satellite Town, before later relocating to Ebute Metta.

Patoranking always had a longing to go into showbiz. He definitely chose a career that will boost his net worth.

He first started with dancing at events like street jams and carnivals, he even made it as far as appearing in local music videos.

He joined an Afro hip hop group called Da Flavour Squad, although he was the youngest member, he was still made the lead singer.

The group went as far as performing at shows in Lagos and even outside Lagos.

Patoranking, however, left the group to pursue a solo career and chose Dance hall and Reggae as his preferred genre.

In May 2012, Patoranking released a single titled “Iya Bisi”, featuring Qdot and Kbaj. The Drum phase-produced song is a fusion of dancehall and Fuji.

On 12 September 2013, Patoranking released the audio and video for “Alubarika” simultaneously. The song literally translates to “God’s Blessings” and features vocals from Timaya.

He was first signed on to Timaya’s record label – Dem Mama Records but left the label for Foston Musik in 2014.

2014 proved to be Patoranking’s year of acclaim, he released his super hit Girlie O produced by Wizzy Pro on the 4th of February, 2014 and released the remix with Tiwa Savage on the 19th of May, 2014.

The remix turned out to even more popular than the first release, it topped charts for weeks and pushed him farther into the limelight. This also contributed to Patoranking net worth.

He also collaborated with Seyi Shay on her song Murda, alongside Shaydee in 2014.

Also, the year 2015 was not bad for Patoranking, he released even more titillating hit songs like Daniella Whine, No Kissy Baby (with Ghanaian rapper Sarkodie), and “My Woman My Everything”. These singles topped the charts after their release too.

He released his debut studio album “God over Everything” on the 1st of August, 2016.

Yes, in one of Patoranking’s powerful quotes, he said: “Every day above the ground is a blessing… Never stop giving thanks.”

Patoranking was also made a judge on the TV reality show The Voice Nigeria in 2016.

We’ve put together 10 life and hustle lessons from patoranking that will inspire you to chase your dreams and achieve it.

In 2016, Patoranking was chosen amongst the likes of Waje, Timi Dakolo, and 2Face as mentors on The Voice Nigeria despite his young age.

We hope that it was interesting for you to find out the brief biography and Patoranking net worth.

Patoranking has managed to achieve great success and become one of our favorite artistes. What did you think of Mr. Alubarika’s worth? Use the comment box below.