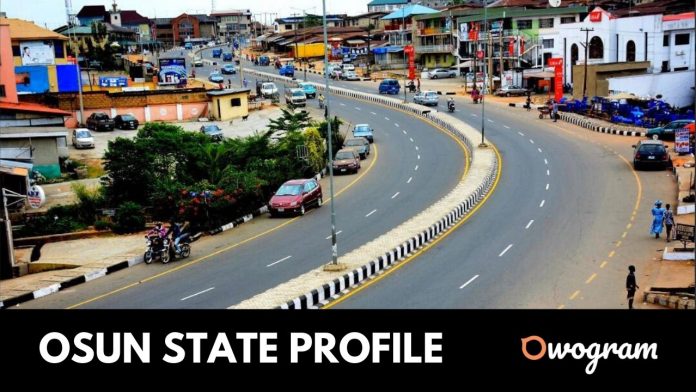 We bring to you a quick profile of osun state and interesting things to know about its history.

Osun is an inland state in southwestern Nigeria. Its capital is Osogbo. The state’s name is derived from the River Osun, the venerated natural spring that is the manifestation of the Yoruba goddess.

It is bounded in the north by Kwara State, in the east partly by Ekiti State and Ondo State, in the south by Ogun State, and in the west by Oyo State.

Osun is one of the 36 states in Nigeria with Osobbo city being its capital.

The struggle for the creation of Osun started as early as 1950. At that time, the present senatorial districts namely Osun West, Central and part of Osun East were subordinate towns under the administration of Ibadan District Native Authority.

In determination to get independence, traditional rulers and citizens of Osun Area submitted a petition to the British Colonial Administration in Nigeria demanding autonomy for Osun Division, with Osogbo proposed as the headquarters.

To realize their aim, they pursued this agenda further in 1951, when a Commission of Inquiry was set up by the Colonialists, headed by H.L Butcher primarily saddled with investigating the crisis in Ibadan District Native Authority between Chief Salami Agbaje and Olubadan-in-Council.

At this commission, named H.L Butcher Commission of Inquiry, a representation was made by people of Osun Area reiterating their resolve for autonomy.

The resilience and doggedness of the founding fathers and crusaders for the creation of Osun were rewarded on August 27th, 1991, when the administration of Gen Ibrahim Badamosi Babangida, who was once on the list of all presidents of Nigeria, created nine states with Osun out of Oyo State and Osogbo as the capital.

Osun is a state in the south geopolitical zone of Nigeria in which most indigenes are predominantly Yoruba.

Most of the Yoruba tribes including Oyo, Ibolo, Igbomina, Ijesha, and Ife can be found living in this state. Osun is the ancestral home of the Yoruba race whether home or abroad.

It is the central and most important location of this morally rich, culturally sound, and highly sophisticated race in the world.

The former Governor Olagunsoye Oyinlola launched and laid the foundation for the groundbreaking of Osun State University with six campuses (Osogbo, Okuku, Ikire, Ejigbo, Ifetedo, and Ipetu-Ijesha) strategically located across the state.

Important cultural events in the state include the Ori Oke and Egungun festival in Iragbiji, Olojo in Ife and the Osun Osogbo festival.

The agrarian state prides itself arguably as the “breadbasket of South West Nigeria” because of the abundance of food and cash crops naturally endowed with, which pools traders and artisans to the state and further helps in its economic development.

The state is also famous for many prominent markets such as Owena, Sekona, Ikirun, Ifon, Odo Ori markets and attracts people from different parts of the country to the state.

Osun state is a cultural hub with ancient antiquities that boost a thriving tourism industry that had seen visitors from different countries of the world paying visits to tourist attractions like the Osun – Osogbo sacred grove, Olumirin waterfalls in Erin – Ijesa amongst others.

Every year, adherents and non-adherents of Osun, one of the Orisa (the traditional deities of the Yoruba people), travel from all over the world to attend the annual Osun – Osogbo festival in August.

The foremost traditional ruler in Osu is the Ooni of Ife, currently personified by Oba Adeyeye Enitan Ogunwusi (Ojaja II) who is believed to be a descendant of Oduduwa the ancestor of the Yoruba nation.

Col Leo Segun Ajiborisha was the first Military Administrator of the State and he governed from August 1991-January 1992 when he handed over to an elected governor, Alhaji Isiaka Adeleke who ruled from 1992 to November 1993.

Prince Olagunsoye Oyinlola took over from Chief Akande and governed from 29th May 2003- 29th May 2007 for the first term. Prince Oyinlola had spent three and a half years out of his second term

Rauf Aregbesola (APC): was declared the validly elected Governor in the 2007 election by the Court of Appeal. He began his first term on November 27, 2010, and won a second term in 2014. He is the current Governor of Osun State.

The state’s current governor is Adegboyega Oyetola, who was declared the winner of the September 2018 governorship elections.

No doubt, Osun State is one of the states in Nigeria that is richly blessed with lands and good climates for Agriculture. Therefore, it is not surprising that most of the largest town in Osun State sees farming and trading as their major occupation.

Agriculture is predominant in Osun as a result of the abundance of its fertile lands that ensures the production of food crops such as Cocoyam, Rice, Maize, Cassava, and so on, as well as mineral resources like Granite, Talc, Clay, Limestone, Quartz, Dolomite, Ilmenite, Mica, and so on.

There are a lot of farmers in Osun who still practice subsistence type of farming (indulging in agriculture primarily to take care of the stomach of their families).

Osun is blessed with natural resources such as gold which have been documented to have been discovered in Ilesha in 1942.

Also, mother nature has blessed Osun State with abundant mineral resources which include granite found in Ilesha, Kaolin found still in Ilesha, Industrial Mineral including Talc in Ilesha, Feldspar in Apomu, and Tin in Ilesha.

Other natural resources include clay balls and building stones of different dimensions such as gravel.

These natural resources could be said to be the reason for industries such as quarries in Osun State.

Several varieties of expensive gemstone-like ruby, sapphire, topaz, zircon and emerald, etc. and if well tapped into will lead to the rise of GDP in Osun State.

Although, the state has diversified to many industries lately, as most of the indigene of the state are literate. Thus, giving rise to many urban centers and cities in the state’s major towns and cities.

We hope you find our article on the top largest towns and cities in Osun State helpful.

Osun emboldens the history of a people whose quest for freedom, self-actualization, determination, and hope for a better tomorrow fought and won the battle for its creation. It was a dream fulfilled and hope achieved.