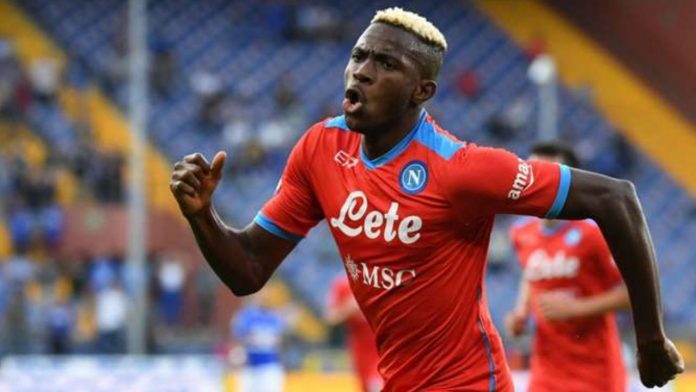 The Super Eagles have had a remarkable outing in September, with a contribution of at least a goal in each of his last five matches.

Victor Osimhen revealed that the love he gets from fans and everyone at Napoli inspires him to “fly” for the club whenever he’s called upon.

The 22-year-old who is one of the richest footballers in Nigeria made up for his red card in Napoli’s opening game of the season against Venezia, by scoring seven goals in his last five matches for the team.

His tally of four Serie A goals has helped Luciano Spalletti’s men maintain their perfect league start which puts them atop of the table with 18 points after six matches.

After his big-money move from Lille in August 2020, Osimhen admitted that he had a “tough” debut season at the Diego Armando Maradona Stadium with injury and coronavirus problems.

“They trust me and stood by me through the tough start last season,” the Super Eagles star told BBC Sport Africa .

“The love I enjoy is massive – the club, the city, the supporters, and everyone connected to Napoli makes me fly. I play for an incredible club with huge football history. I only have to focus and give my best all the time.

“Of course I am happy to be among the most expensive African footballers in history.

“I really want to get higher in the colours of Napoli. It was a childhood dream to become a professional footballer. I never knew this transfer or something this huge was going to happen.

“I just wanted to succeed in football, and do well for myself, take good care of my family and my few friends.”

Osimhen, who was named the best African Player in Ligue 1 for the 2019-20 season, has not hidden his love for Chelsea and Africa legend Didier Drogba.

He disclosed his affection for the two-time African Footballer of the Year started while he was growing up in the city of Lagos and he learned a lot from him.

“My big brother and senior man Ighalo did well for Nigeria and even finished as top scorer at the last Nations Cup in Egypt,” he continued.

“But I took Drogba as my role model while I was growing up and that has been the guiding light. I think watching him a lot and the kind of mentality he has in terms of football has really helped me a lot to get to where I am today.”

Osimhen will hope to continue from where he stopped in September when Napoli visit Fiorentina for their next Serie A game on Sunday.

He is among the strikers selected in Gernot Rohr’s 23-man squad for Nigeria’s Fifa World Cup qualifying games against Central African Republic on October 7 and 10.