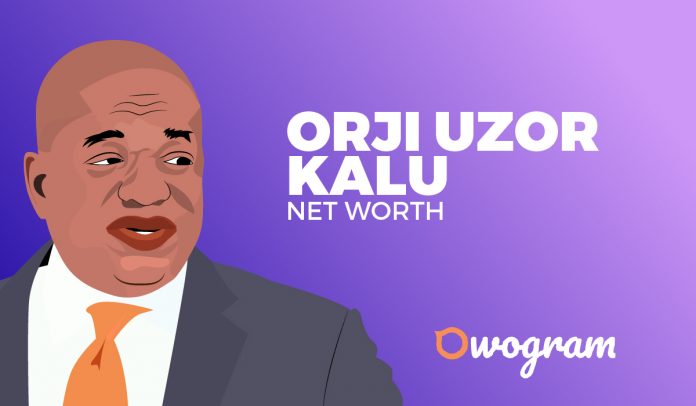 What is Orji Uzor Kalu net worth today?

Orji Uzor Kalu is one of the most popular political individuals in Nigeria today.

He became widely known across the country when he served as the Governor of Abia state for 8 years from 1999 to 2007.

As with most former governors in Nigeria, Kalu went through different charges of corruption for years after the conclusion of his regime back in 2007. This led many to believe Orji Uzor Kalu Net Worth is well beyond the average rich Nigerian.

Before any of his political endeavors, however, Kalu was an established businessman who had different investments in his name. No doubt, Orji Uzor Kalu net worth had started to grow. Today, he is one of the top 10 richest Nigerian men.

One thing everyone can agree on is that Uzor Kalu’s Net Worth before his appointment into the office of Governor is miles behind his total worth today.

Having been convicted of corruption in millions of dollars, it is safe to say that his net worth today is beyond what most people imagine it to be.

In this article, we will provide you with Orji Kalu Net Worth through his earnings while in Office, and business ventures.

Other details you will be exposed to includes his biography, quotes, life lessons, and other interesting facts you never knew about him.

Net worth: $2.3 billion. Here are some of his achievements and awards below:

Mr. Johnson Uzor Nesiegbe Kalu and Mrs. Eunice Kalu welcomed Kalu into their family on the 21st of April, 1960.

He was raised in the Christian way and is a native of Aba, which is the industrial region of the Southeastern part of Nigeria.

Kalu had his primary education at Christ the King School in Aba, while he attended Government College in Umuahia for his secondary education.

He, however, concluded his secondary education at the Barewa College in Zaria where his family moved to due to his father’s business obligations.

Kalu was admitted to the university of Maiduguri into the department of Political science. This obviously shows his passion for politics from his youthful days.

While a student in the institution, he was a pronounced student activist who took part in different movements like the ‘Ali must go’ protest which was staged against the minister of education.

This led to his immediate suspension from school activities and premises. Though the institution was dragged to court for its actions to deny students of their rights to protest, Kalu decided to drop out of school and focus on business.

At the time, Orji Uzor Kalu Net Worth was understandably Insufficient to help him start up a business venture.

This led him to borrow $35 from his mother to start trading palm oil by buying from the Eastern region where palm oil is abundant and selling to the Northern region of the country. Over time, he coupled this with selling Furniture on large scale.

After building his business for several years, it became so big that he had to create a major group company that has subsidiaries.

Wouldn’t you agree that Orji Uzor Kalu net worth had started to pick momentum right from an early stage in his life?

Due to his business exploits across the country as an industrialist, his work was recognized by then-President, Ibrahim Babangida. He was duly given the National Merit Award aged 26 in 1986.

Furthermore, he earned the Industrialist of the Year by the Nigerian Chamber of Commerce, Humanitarian Award of the University of Nigeria, Nsukka’s Humanitarian Club, the Volunteer Award of the International Association of Volunteers, the National Merit Award, the EU Special Award in Brussels, and the World Bank Leon Sullivan Award.

In the years that followed, Kalu finally bagged a degree from the Abia state university, a Certificate in Business Administration from Harvard University, and honorary doctorates from the universities of Maiduguri and Abia State.

In 1997, Kalu became the CEO of First International Bank Limited which was a really big deal for him at the time, considering how his earnings grew significantly.

While serving at the First International Bank Limited, Kalu was able to facilitate Nigerian commercial relations with China’s SinoPacific Shipbuilding company. Orji Uzor Kalu Net Worth grew through all these engagements which he created.

Having been interested in politics since his days in tertiary institution, Kalu became the Governor of Abia State on the 29th of May, 1999. He served his state for eight-year, with his regime running till the 29th of May 2007.

Before earning his office as Governor, Kalu served in different political positions across Nigeria. He led the Borno Water Board, as well as the Cooperative and commerce bank Limited.

While serving in these positions, he switched political parties between the People’s Democratic Party (PDP) and the Progressive people’s alliance (PPA). He once served as the head of the Board of Trustees for both parties.

Orji Uzor Kalu Net Worth got good measures of funds through his creation and investment in newspaper companies such as the Daily Sun. The newspaper recorded sales of up to 80% of its daily productions which totaled 130,000 copies.

Another news communication he created is the New Telegraph which is mainly created for both local and foreign readers living in major cities in Nigeria.

Several years after the conclusion of his regime, Kalu was convicted of corruption and embezzlement by the Economic and Financial Crimes Commission (EFCC).

He allegedly embezzled up to N8 billion through his company, SLOK Holdings. This was the total amount that he took from state funds within the 8 years he served as Governor of the state.

Orji Uzor Kalu Net Worth was terribly hit by this development, as his company, SLOK Holdings was slated for forfeiture by the court.

After serving a year in prison, Orji Uzor Kalu was released on the 3rd of June, 2020 on grounds of inappropriate judgment.

Following his release, Orji Uzor Kalu swiftly contested in the 2019 Nigerian general election to represent the people of Abia North in the senate, running under the banner of All Progressives Congress.

He won the opposition with a huge gap and is still serving as the senator to date. Orji Uzor Kalu Net Worth is valued at $2.3 billion.

Orji Uzor Kalu Net Worth allows him the liberty to spend lavishly on whatever he sees fit.

The exorbitant amount of money that he has been able to accrue through his numerous business investments, as well as the embezzled funds makes him capable to afford luxury things which he needs and the ones he doesn’t.

Kalu owns luxury mansions in Abia State, Lagos State, and the United States of America. Each of these houses is worth not less than $10 million.

They all come with all modern facilities which everyone dreams of such as a state-of-the-art gym, swimming pool, jacuzzi, sauna, spa, and so on.

He also boasts of numerous luxury cars including the likes of Porsche Panamera, Mercedes Benz S-Class, a Range Rover Sports SUV, and so on. These cars are worth N45 million, N15 million, and N21 million respectively.

His most expensive acquisitions to date is none other than his two private jets which are both worth up to $80 million.

Orji Uzor Kalu Net Worth is such an outstanding value that will surely take many by surprise.

Despite the expectation that his true worth will be huge, no one would still expect it to be as huge as it is today.

This explains just how much the politician was able to earn big while in office, considering the rapid rate at which Orji Uzor Kalu Net Worth grew from before his election as Governor to After.

This article has been able to provide you with a good insight into just how rich Orji Uzor Kalu is.

It is no wonder he is one of the richest individuals in Nigeria, as well as in Africa as a whole.