Home Net Worth Niniola Net Worth, Age, And Biography 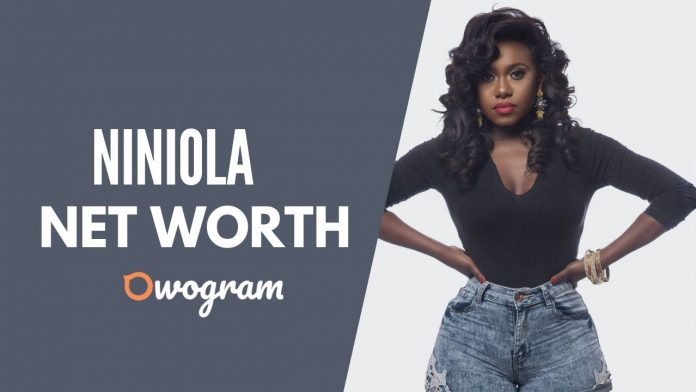 What is Niniola net worth

Today, we will be discussing one of Nigeria’s Top Female Artists who is super talented and very creative.

Please scroll down to see information about Niniola net worth, her Biography, Career, Age, Profession, Genre, Record Label, and many more.

Although Niniola is not among the top 10 list of the richest musicians in Nigeria, she is a Nigerian singer and songwriter who’s best known for participating and finishing third runner-up on the sixth season of the reality show Project Fame West Africa.

She released her debut single “Ibadi” in March 2014.

Niniola Net worth and highlights

Niniola Apata’s source of income comes from the sale of her music, shows, and tours where she performs.

As one of the most influential female singers, Niniola net worth is  $1.7million.

The singer made her money from her music, live performances, and several deals and contracts as an ambassador of various brands

Niniola‘s biggest song is arguably her single titled, Maradona. However, the singer has other hit songs.

Some of them are the ones listed below.

Well, Niniola has shared several pictures of herself posing beside a white Toyota Venza. From what we’re seeing, the car can pass for the 2010 Venza model.

Singer Niniola hasn’t publicly stated owning a house, though we’ve seen her sharing photos of her posing in front of a house. However, we know she’s staying in Lagos State where she grew up.

Niniola was born and raised in Lagos State.

She comes from a polygamous family and she is the sixth of ten children, raised by three mothers and a father who was killed in 1995.

Niniola is the older sister of singer Teni.

Simeon Olaosebikan Apata, their father was a retired Nigerian Army Brigadier-General and he was assassinated on January 8, 1995.

Niniola did her primary education at Apata Memorial School, a military boarding school in Ekiti state founded by her father, Simon Apata.

She graduated with a Bachelor’s degree in education, a four-year course at the University of Lagos.

Niniola‘s love for music dated back to her secondary school days.

She uses her classmates as her audience and performs to them for free.

She was so good that she led the school’s cultural musical group in inter-school and inter-state competitions.

After graduation, Niniola continued to pursue her passion for music, which led her to participate in the MTN Project Fame Season 6 edition in 2013.

Her performance was weakly acknowledged as she finished 3rd in the competition.

In one of our favorite Niniola quotes that “When you believe in a thing, believe in it all the way, implicitly and unquestionable.” She never stops in her pursuit of greatness and goal.

Her first single titled, Ibadi, produced by Sarz released in March 2014, became one of the most requested and listened to songs in Nigeria and Africa at large.

She went on to make more hits.

Her hits include Gbowode, Soke, followed by, Start Over, Shaba, J’ete, Jigi-Jigi, not leaving out Maradona, and Sicker.

Niniola’s international appearance has seen her work with Ugandan Eddy Kenzo on his hit song titled, Mbilo Mbilo. This feature won them the award for Best Collaboration at the AFRIMA award in 2016.

After keeping fans in much anticipation, the Nigerian singer released her first album titled, This Is Me, with 13 tracks on 1 November 2017.

The album came with an award for Apple Music’s Artist of The Month.

Her success drove her to a music tour in South Africa, and she was immediately contracted to perform at the prestigious South Africa Music Carnival held in February 2018.

Renowned African DJ Snake couldn’t get over Niniola‘s single, Maradona, which propelled her to collaborate with a remix titled, Maradona Riddim, released on 22 July 2018.

The show was a significant success.

Niniola Apata is a Nigerian singer and songwriter

Where does she make her money from?

The singer made her money from her music, live performances, and several deals and contracts as an ambassador of various brands.

When was her first official single released?

Her first official single was Ibadi, produced by SARZ and was released in March 2014.

Her father was Simeon Apata, a popular retired Brigadier General that was assassinated when she was about eight years old.

What is the relationship between Niniola and Teni?

She is the older sister of the popular Nigerian singer, Teniola Apata.

Related: Behati Net Worth And Biography

Create Your Own Style

Find a unique way of making yourself stand out among several others in your Industry.

Her father had 10 kids and they all grew up in the same house. She grew up understanding that everyone has an opinion. She rather spends more time getting better than bother about opinions.

That’s it on Niniola net worth.

Live your life strictly on terms and not by anybody’s rule and live by the simple rule, ‘to do unto others what you want them to do to you.