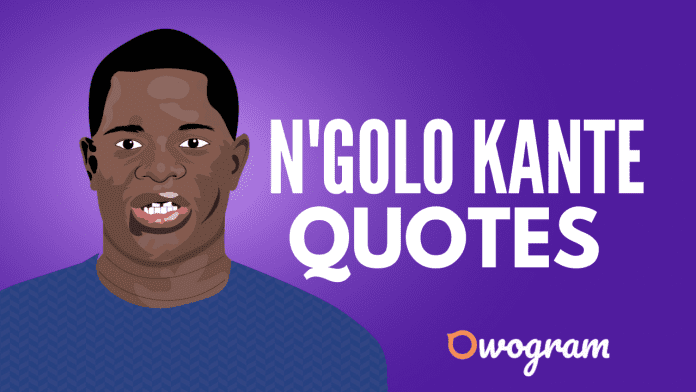 As you already know, Kante is a professional French football player who has won the World Cup, enjoyed the victory of the English Premier League twice, and many other awards to his belt.

He is known for his clean tackles, stamina and ability to cover long distances as well as his ability to win back the ball. For that he has made a big name for himself.

N’Golo Kanté net worth and current salary are proof that he is a successful football player, and in this quick collection of N’Golo Kanté quotes, you’ll learn about him.

You’ll come to know what his ideologies are, what elevates his spirit, what keeps him determined, how he handles failures, and what his simple lifestyle means to him.

1. “I’ve never been someone who loves a car and when I was young I didn’t have the ambition of a car or something like that.” N’Golo Kanté

2. “Among the clubs that most wanted to recruit me were Marseille and Leicester.” – N’Golo Kanté

3. “It is true that I receive a lot of praise and that is flattering. But I try not to let it affect me.” – N’Golo Kanté

4. “The main thing is how we play and how we work in training.” – N’Golo Kanté quotes

6. “I play with some talented players like Cesc Fabregas, Nemanja Matic, and Nathaniel Chalobah. They have different styles and I can learn from everyone.” – N’Golo Kanté

7. “To win the World Cup in our colors was beyond my dreams and something I will never, ever forget.” – N’Golo Kanté

8. “I try to speak with my teammates a lot because I need them every day.” – N’Golo Kanté

9. “My teammates at Chelsea have told me about the ‘Kante-facts.’ It is just a bit of fun. I obviously do not cover 30 percent of the surface of the earth.” – N’Golo Kanté

10. “I play football and I want to be considered as a footballer.” – N’Golo Kanté quotes

12. “My failures were something for me – my first contact with professional football. Though it didn’t go all that well, it’s not a regret, it’s just like that. But looking back, those failures helped me consider football differently, consider the professional game differently.” – N’Golo Kanté

14. “Whatever you did in the past is quickly forgotten.” – N’Golo Kanté

15. “There have been beautiful achievements of winning titles with my teammates.” – N’Golo Kanté quotes

16. “We are lucky to be playing football for a living. For me, this is what I have always wanted to do.” – N’Golo Kanté

17. “There are millions of ­people out there, who every day want to get the opportunity to do the work we are doing and it’s a short career. That is why I give it my all at every given opportunity.” N’Golo Kante

18. “With Arsenal there was an interest but not a big as other clubs. That is why I didn’t go to Arsenal and went to Chelsea.” N’Golo Kante

20. “To represent one’s own country is one of the biggest achievements a footballer can get.” – N’Golo Kanté quotes

21. “I was at Boulogne, in the second team – the sixth, then the fifth division. I wasn’t professional, so I kept studying because I wasn’t sure if I would be able to make a living as a footballer.” – N’Golo Kanté

22. “My favorite thing is when we lift a trophy. Afterward, we can have a picture of us lifting a trophy. And that picture shows a lot of work, a lot of difficulties and a lot of sacrifices together.” – N’Golo Kanté

23. “I made the right choice to come to Chelsea.” – N’Golo Kanté quotes

24. “I got my qualification in accountancy, but now I prefer to concentrate on football.” – N’Golo Kanté

25. “It was amazing to have Mourinho call me, even though I’d been warned before how he would appeal to me. I listened to his arguments about why I should move to the United. But at that time I was hesitant between staying at Leicester or leaving for Chelsea.” – N’Golo Kanté

26. “I am at Chelsea and I still have aims here, what is said elsewhere is not important.” – N’Golo Kanté

28. “We will fight against good teams.” – N’Golo Kanté quotes

29. “Sometimes I can help the team to score, to make the last pass or to get more chances and try to score. Maybe I can do this more often.” – N’Golo Kanté

30. “For two or three years I played on the wing when I went to Boulogne in 2011, I started playing in the middle as a central midfielder.” – N’Golo Kanté

31. “When I first went into the senior game I was more of an attacking player to begin with.” – N’Golo Kanté

32. “I am lucky to get the opportunity to play for France and that alone is a huge motivation for me, whatever I go on the pitch.” – N’Golo Kanté quotes

33. “To be honest, it was only when I was first in the French Ligue 1 that my manager and other people started to say, ‘Okay, N’Golo recovers a lot of balls.’ Before that, I didn’t consider it to be my job in the team.” – N’Golo Kanté

34. “When we have to defend, I just try to recover the ball for the team because it’s important, but I always try to go forward when we have the ball.” – N’Golo Kanté

35. “When I arrived at Chelsea, I was at Leicester and I had just won my first title with a club.” – N’Golo Kanté

37. “I have worked with different managers in the past and different systems.” – N’Golo Kanté quotes

39. “The Premier League is a competition that suits me, which is perhaps more praise to myself. It’s more direct, more rhythmic than Ligue 1.” – N’Golo Kanté

42. “I don’t want people paying too much attention about what I am outside of football, what I’m doing, and asking: ‘Who is N’Golo?’” – N’Golo Kanté quotes

43. “Ask me about my football, and not too much else. I just want to be a player among the players.” – N’Golo Kanté

44. “I am how I am. I cannot explain it well, but I don’t feel the nicest person, on the football pitch or in life, I’m just myself.” – N’Golo Kanté

45. “I am not a superstar or an ego. I am just the same as I always was: Someone who plays football.” – N’Golo Kanté

There you have it. Thanks for checking our collection of N’golo Kante quotes about football, life, determination, and success.