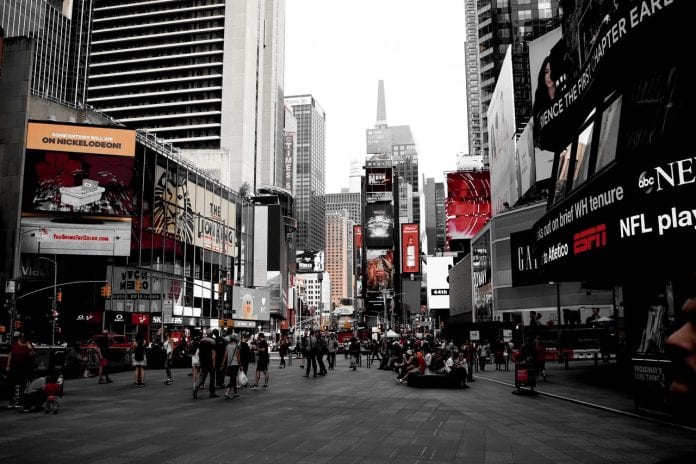 New York State is usually called New York City by most non-USA citizens because New York is a state and at the same time, a city.

Try to also see the list of all 50 United States in alphabetical order.

The popular statue of liberty is located in New York and it stands for liberty enlightening the world.

The capital of New York is Albany which could be found in the west banks of Hudson River.

Albany is regarded as the permanent capital of New York State and it became its capital in the year 1797.

New York has many nicknames and some of the nicknames are; the Empire State, Gotham, the Big Apple, and many other nicknames.

NY is popularly regarded as a busy state because it is a state full of different businesses and it is one of the best states in the United States of America.

Would you like to also know about Arizona State? Read to learn more interesting things about the state.

New York Flag consists of New York’s Coat of Arms. The features include a blue background, two supporters, an eagle, sun, and the word “Excelsior” which is the motto, meaning “Ever Upward”.

Also, under the sun figure, there is a view of a river called Hudson River with two ships.

There is also a globe at the top which has an American eagle on it. By the two sides of a shield figure, there are two supporters; the supporter of Liberty by the left and the Supporter of Justice by the right.

Related: The top 10 most populated states in the US

New York City didn’t have an official flag for hundreds of years that since it was formed but as a result of the installation of New York’s first Mayor, the creation of an official flag was proposed.

In 1915, the official flag of New York was designed and the flag consists of three different colors, which are Blue, White and Orange.

These colors are similar to the colors of the Prince’s flag of the Dutch but the only difference in color is that the Dutch flag has a Red color instead of the Orange color, it is proper to know that the Dutch used to use Orange before it was changed to Red.

Another difference is that the flag of New York City is placed vertically while the Dutch flag appears horizontally.

The seal contained the figure of a Bald Eagle, Native American, a Sea Man, Beaver, Windmill, Flour Barrels, and the displayed year 1625 which represents the year of establishment of the New Amsterdam.

New York state is located in the Northern part of the United States of America, particularly the Northeastern area of the U.S.A.

By area size, New York takes the 27th position among other states in the United States. It has a land area of 21.8 square miles.

New York State is bordered by Pennsylvania and New Jersey to the south, Rhode Island, Connecticut, Massachusetts, and Vermont to the East.

The people of New York are often regarded as New Yorkers. New York is home to over 19,453,561 people and New York City is home to a huge fraction of these people as it has over 8,232,340 residents.

New York state is rich in culture and traditions as different immigrants had moved to the state over the years.

New Yorkers involve in a lot of festivals and some of these festivals are; the Cape Vincent’s Annual French Festival, Albany’s Tulip Festival, Lark Fest, and many others.

There are quite a lot of ancient buildings in New York which could link to the history of New York at its early state.

Notable Museums are all over New York cities where people of New York could learn about their cultural heritage.

New Yorkers are also music lovers as they even engage in music festivals like the International Celtic festival and the German Alps Festival.

New York has a lot of natural habitats on the part of animals, ranging from Insects to aquatic animals and mammals.

New York state has about 80 species of Fish, not only that, it is home to different kinds of small and large animals like black bears, chipmunks, bald eagles, raccoons, Indiana bats, snowy owls, coyotes, and many other animals.

New York is really a lovely place to enjoy and relax with family and friends. You should also know that New York is ranked the 4th most populated State in the United States of America.

Related: Alaska state in USA – Interesting facts you should know

Did you know that the New York state subway system is classified as one of the largest public transportation system in the world?

Well, I have more interesting facts about New York State which I would love to share with you below.

5 Most popular Cities in New York

There are 62 cities and 932 towns in New York State. The most popular of them all is New York City and I would like to tell you about it and four other popular cities below.

It is located in the Northeast coast of New York State, USA.

The population of New York City has been calculated to be around 8,232,340 and that makes it at least 2 times higher than any other city in the United States of America.

New York City is usually called the Big Apple and it is one of the most famous urban settlements in the world.

This city is known for various types of food productions and it is various relaxation centers, museums, parks, and many more places to have fun and learn about New York’s history.

Buffalo city is the second most popular city in New York State with a population of about 222,244 people.

Buffalo is located in the western area of New York State and it is closer to the border of Canada.

Buffalo has produced up to two U.S presidents and one of them is Grover Cleveland. The cost of living in Buffalo is lower than that of New York City.

The third most popular city in New York goes to Rochester city. Although Rochester City is in New York State, its location is still view as part of the Midwestern region.

Rochester is found in the western area of New York State; particularly on the southern shore Lake Ontario.

Rochester city has a population of about 203,792 people and it has a land area of 35 square miles.

Rochester is home to a lot of big companies, talking of Xerox, Kodak, Bausch & Lomb and some other notable companies.

Yonkers is found in the east banks of the popular Hudson River, particularly in Westchester County.

The total population of Yonkers has been calculated to be about 199,021 and it has a land area of 20.3 square miles.

Although, Syracuse city is the last on this list but it is the 5th most popular city out 62 cities in New York.

Syracuse city is found in the southern edge area of Sicily Island close to the Lake of Onondaga.

Syracuse is nicknamed salt city because of its salty springs and it is often regarded as the central of New York State.

By population, New York is one of the top 10 largest states in USA. Most people would love to visit New York, particularly New York City to take sights of gigantic buildings and enjoy the Modern Urban Settings.

The people of New York state are quite friendly and there is no how you won’t make new friends. But one thing you should know is that New Yorkers are very dedicated to their businesses and jobs since New York is believed to be a State for businesses.

What do you think of the interesting facts in the posts above and how well do you love New York? Kindly share your opinion in the comment box below.