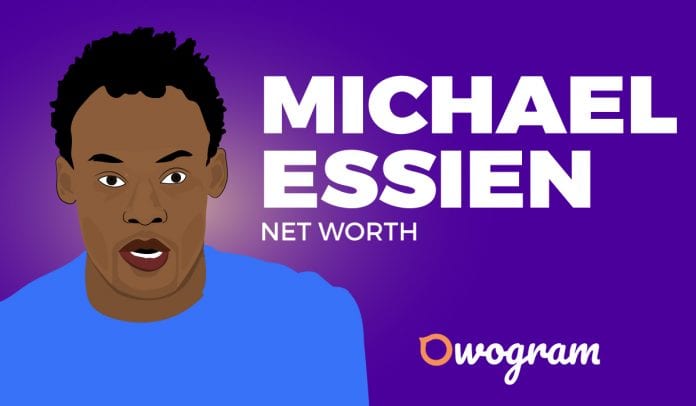 What is Michael Essien net worth?

Michael Essien is one of the best midfielders that the continent – Africa has produced in the past two decades.

His role in the deep midfield to recover possessions, make tackles, as well as being in attacking positions made him such a standout and unique midfielder during his prime.

It’s no wonder Chelsea spotted his talent and forked out a huge sum in order to acquire his services.

Michael Essien net worth has never ceased to be a topic of discussion ever since making a great career for himself at Chelsea.

As of today he sits on the rankings of the top ten richest African football players.

His loan move to Real Madrid also fuelled the fire as fans wondered just how much Micheal Essien net worth will be, considering the fact that Real Madrid is one of the greatest football clubs around the world.

This article will help answer your questions about Michael Essien, his salary, lifestyle, among other things.

So come with us, as we explore the successful career and earnings of Michael Essien.

As of today Micheal’s net worth is estimated to be approximately $35 million dollars. As of 2014 his salary was 2.5 million Euro.

Here are some of his highlights below:

Micheal Kojo Essien was born on the 3rd of December, 1982 to his parents, Aba Gyandoh and James Essien.

He had his education at the Gomoa Nyanyano DC primary and junior secondary school.

His football career kicked off immediately after graduating from the prestigious St. Augustin college which was situated in Cape Coast while he was part of the team referred to as the Liberty Professionals.

It was through this team that his career was kick-started and from there, he never seem to look back, going from strength to strength.

Who knew what Michael Essien net worth could turn out to be? Let details of his career speak..

Essien got the attention of European clubs through his dominant performances in the 1999 FIFA U-17 world championship which was held in New Zealand.

English scouts immediately swooped in and he had trials with several football clubs in England. He featured in a trial match for Manchester United in April 2000, against Derby County during an Under-17 game.

His performances earned him a contract at Manchester United but since he was unable to get a work permit at the time, he then had to consider moving to a Belgian feeder club named Royal Antwerp but his mother preferred a move to France instead.

In July, 2000, Essien swiftly moved to Bastia in the French Lihue 1 to suit the desires and preferences of his mother.

This move paid off as it was at this club that Essien groomed his footballing talent and moved from strength to strength and no doubt adding to Michael Essien’s net worth.

He made his debut for the club against Metz during a Ligue 1 game. He had an inconsistent form during his early-season at Bastia as a result of his deployment in different areas of the pitch, which would not favor anyone, especially when you don’t play in the natural position.

But as time went by, with a change of coach, Essien commanded a place in the starting eleven for Bastia.

This consistency gained him plaudits from fans and opponents alike, turning their heads with solid defensive display.

His performances made PSG and Lyon which are top clubs in the French ligue to battle out for the signature of Michael Essien.

He subsequently signed for Lyon because of the appropriate financial package that suited the services he renders.

This was the beginning of Michael Essien net worth. He was immediately included in the starting eleven and he seamlessly fit into the team and the style of play.

He was given the number 4 shirt and majorly played as a Box to Box midfielder with a role to protect the club’s star playmaker, Juninho, and also cover the defense.

His debut for the club was in a French cup final clash against Auxerre and within 5 minutes of the game, Essien had scored his debut goal for the club in a match they went on to win 2-1. This became the first club honor that Essien received in his early career days.

Essien followed up his successful debut at the club with exceptional performances and it was hard not to notice his skill on the ball, his resilience and ferocious tackles that leaves opposition players for dead.

After successful years at the club, Chelsea FC, one of the most valuable football clubs in the world, came knocking the door of Lyon with a bid of £24 million.

That was a deal too good to reject, although the transfer took quite a while before It was successfully resolved.

Chelsea so much loved Essien to the extent of breaking their own transfer record when they signed Didier Drogba in the summer before.

Essien signed a four years contract with Chelsea and he received an exponential increase in his salary upon moving to the club. This contract was a major boost to Michael Essien net worth.

Essien made his debut for Chelsea as a substitute on the 21st of August 2005 against Arsenal with the number 5 shirt in a match which Chelsea eventually won.

He had his first assist in his following game against West Brom. He sealed his status as a player for the starting eleven under Jose Mourinho by starting 31 games across all competitions.

During his time at the club, Essien won the English premier league twice in 2006 and 2010, three FA cups and a league cup. Interestingly, the English Premier Leauge is currently the best football league in the world.

He was also among the Chelsea team that won the club’s first UEFA champions league title in 2012, a competition where he finished as runner up against Manchester united in 2008.

On Another individual level, Essien won Chelsea’s Goal of the Season award twice, while also winning the player of the season award once.

In the summer of 2012, following the departure of Jose Mourinho to Real Madrid, Essien signed for Real Madrid on loan in order to reunite with his favorite manager once again.

During the press conference where Essien was unveiled, Mourinho referred to Essien as his Son, something Essien also reciprocated by calling him his Daddy.

At Real Madrid, he scored his first club goal in November, while scoring his last goal for the club on the final day of the season.

His loan move was not made permanent so he swiftly moved back to Chelsea who then sold him immediately to AC Milan.

The contract signed at the club remained a boost to Micheal Essien net worth, due to the increase on his previous contract at Chelsea.

In 2015, Essien moved to Panathinaikos on a two-year contract which made him the highest-paid player for the club.

You can imagine just how much Micheal Essien’s net worth is at this time. He arrives at the club with an injury to his leg, making his early period at the club a tough one.

He finally made his debut for the club against Levadiakos in a game he scored and his team won at 2-1. His contract was however terminated on a mutual agreement at the end of the season.

Today, Michael Essien net worth is estimated to be $35 million.

In one of our Favorite Michael Essien quotes, he said; “It’s a big surprise for me because if somebody asked me when I was playing if Frank Lampard would be a manager, I would say no because he’s very quiet“

Although Michael Essien is not on the list of the world’s richest footballers, he has carved his name on the golden hearts of his fans.

Summary of Michael Essien Net Worth

Michael Essien net worth of $35 million is well deserving for the successful football career that he’s had for more than a decade.

He has made himself an example of emulation for youths, especially in Africa, through his hard work and relentless drive for success on the pitch.

Essien made himself a name on the pitch by making life hard for opposition players while also contributing his own quota to the team in terms of goals and assists.

This is why he achieved legendary status once he won the Champions League at Chelsea in 2012. He is also fondly known as one of the best midfielders who put on the Chelsea shirt.

Here we come to the conclusion of Micheal Essien net worth. So, what did you think? Share with us your thoughts in the comment box below.