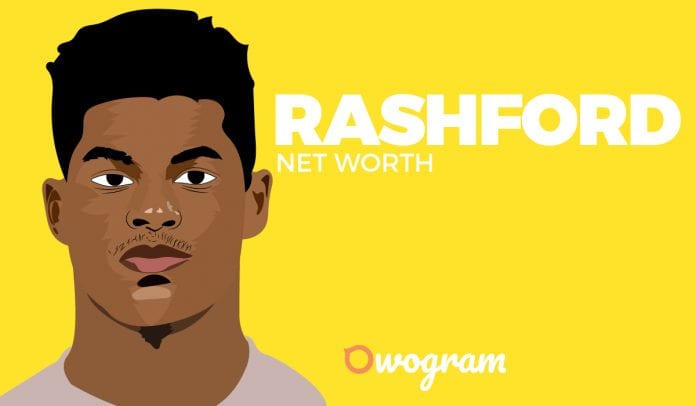 How much is Marcus Rashford net worth?

Emerging as one of the brightest footballing talent a few years ago is Marcus Rashford. Once given the chance to prove himself, Rashford took any opportunity with all his might, producing excellent displays for Manchester united.

So far, he has had an excellent career in football by establishing himself as a first-team player for a club as big as Manchester United at such a young age.

Marcus Rashford net worth is one of the most discussed topics among fans of Manchester United, as well as rival fans. Such is the influence he has in England and across Europe.

Although Rashford is not on the list of the top 20 richest soccer players in the world, most fans are of the opinion that Marcus Rashford net worth is huge, considering the fact that he represents one of the biggest clubs in the richest league in the world: The English premier league.

Through this piece of writing, we will explore Marcus Rashford net worth, while also pinpointing some other facts about his life, career, earnings, and many other interesting topics fans discuss the superstar footballer.

Marcus Rashford was born to his parents in Wythenshawe in Manchester on the 31st of October, 1997. Though an English national, his origin can be traced to Kittitian descent through his maternal grandmother who was born on Saint Kitts Island.

He has two other male siblings who go by the name Dwayne Maynard and Dane Rashford respectively. He is also related to Lois Maynard who plays as a midfielder for Stockport County in the championship.

He never had a father figure while growing up since he dumped the family when Rashford was still very young, leaving just the mum to cater to the needs of Rashford and his siblings alone. Who thought that Marcus Rashford net worth would be a big topic of discussion in the near future?

After shooting into limelight, a man who claims to be his father resurfaced, but no news have been heard about him since then.

Rashford’s football career started with the Fletcher Moss Rangers at the very young age of 5. Two years later, he joined the Manchester United youth academy due to him impressive talents which attracted the eye of scouts.

According to him, he was always a fan of the Brazilian Ronaldo, ever since he watched him score a hat-trick against Manchester United at the Old Trafford; a match which he tagged his first-ever at old Trafford.

Ronaldo’s performance earned him a standing ovation from fans on both sides. He is also a lifelong fan of Cristiano Ronaldo who represented Manchester united until 2009. He always modeled his game around Cristiano’s playing style.

After turning out magnificent performances for United’s youth team, he earned a place in the first team set up on the 21st of November 2015.

At this time, the manager of the team was Louis Van Gaal who got credited for giving Rashford the chance to showcase his excellent talents to the world.

Rashford earned his first start for United in the Europa League round of 32 against Midtjylland after injuries plagued some of the first team players.

He made an immediate impact for the team by scoring a double on the night to earn United a thumping 5-1 win.

Through these goals, he became the youngest ever player for the club to score in European competition, breaking George Best’s record. During these times, Marcus Rashford net worth had started gaining potential.

Rashford was swiftly given his premier league debut in a game against rivals Arsenal. He scored another brace while also providing an assist for the final goal that earned United a 3-2 win.

This scoring feature made him the third-youngest player to score in the history of Manchester United, behind only Welbeck and Macheda.

Rashford also made his mark in the Manchester derby in 2016, by scoring the only goal of the encounter. He kept up his blistering start to life at Manchester United, scoring a total of 8 goals in 18 appearances by the end of the season. His performances then earned him a contract which exponentially increased Marcus Rashford’s net worth.

Fast forward to the 2019 summer, Marcus Rashford net worth earned further boost after he put ink to a four-year contract with the club, with an option to extend the deal for another year.

Playing in one of the best football leagues in the world is no joke, but Rashford made a statement on the opening matchday by scoring a brace in a 4-0 victory against arch-rivals Chelsea. Afterward, Rashford got stuck in a Streak of poor form with an extended run of games without goals.

He gained some confidence after scoring the only goal in United’s 1-1  draw against Liverpool, ending a run of 17 games without a goal.

He scored and gave another assist in the matchday that followed against Norwich city. He also scored a brace against Chelsea in EL Cup to earn United progress to the Semi-final of the competition.

After going on the best scoring streak of his career, Rashford suffered a double stress fracture on his back in a FA Cup game against Wolves.

This injury put him out of action for months until finally recovering in time for the Project Restart. His return to football saw him score a brace against Bournemouth in a league game that ended 5-2.

His performances that season earned him a third-place vote for the English FWA Footballer of the Year award while receiving the FA Merit award.

Rashford net worth is estimated to be approximately $80 million.

How Rashford Spends His Money

Marcus Rashford net worth obviously allows him the freedom to live like a King in his own place.

Most footballers are accustomed to living luxurious lives and Marcus has done enough to be able to make the dream luxury life a reality.

Rashford has an enviable fleet and collection of cars which are cumulatively worth £300,000. His fleet of cars includes Range Rover Urban, Audi A3, Mercedes S Class Coupe, and a Mercedes CLA 45.

He also lives in a luxurious mansion located in Cheshire. He got this home for a whopping £1.85 million and features 6 Bedrooms, 5 Bathrooms, a Garden, 4 Receptions, and many other features which make it worth all the money spent.

In one of Marcus Rashford quotes, he once said; “I learn something new every game. Every game is always different, no matter how you try and think about it beforehand.” – Rashford

Summary of Marcus Rashford Net Worth

Marcus Rashford’s net worth identifies him as a top footballer in the world of football. Players don’t earn that much unless you are a superstar that is recognized by many teams around the world.

Rashford has proven himself to be a start right from the start of his career up till this moment. He showcases his talent every single time he takes to the pitch, turning out attractive performances with skills, shot power, and goals.

This article has taken a look at Marcus Rashford net worth, how he got to earn all he has, his life, how he spend his earnings and many more.

His story has been such an exciting one for football fans who support his team and the opposition. He is obviously a player everyone would want on their team due to his quality on and off the ball.