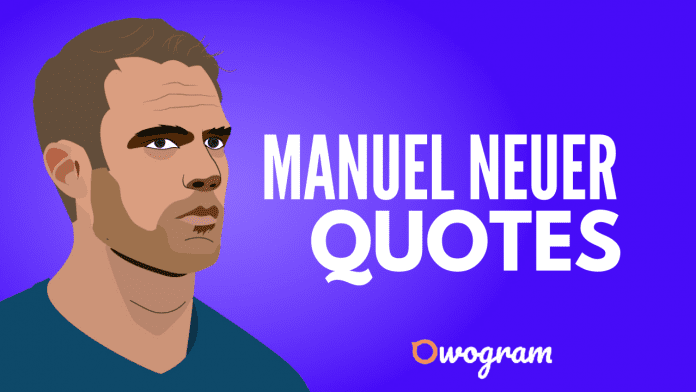 We bring to you 61 interesting Manuel Neuer quotes about football that you should remember.

As you may know, Manuel Neuer is a German professional footballer who plays as a goalkeeper and captains both Bundesliga club Bayern Munich and the German national team.

He is regarded as one of the greatest goalkeepers in the history of the sport.

Manuel Neuer net worth is proof that he has achieved a great height in his career, and as it stands, he is one of the highest-paid goalkeepers in the world.

How did he achieve such height? What kept him going? In this collection of Manuel Neuer quotes, you’ll learn more about his ideologies, life’s perspectives, etc.

1. “You can plan, but what happens on a football field cannot be predicted.” – Manuel Neuer

2. “I have three goalkeepers who really inspired me. Jens Lehmann was my idol because he played for Schalke and was really progressive in the way he developed the position in Germany. I also have a lot of respect for all that Oliver Kahn achieved with the national team.” – Manuel Neuer

3. “Outside Germany, I would add that Edwin van der Sar was a big role model.” – Manuel Neuer quotes

4. “I used to cry when I let in a goal. I always thought I was to blame because I was the last man.” – Manuel Neuer

5. “The calmness and confidence I take into matches has an effect not only on our rivals but also on my team-mates, who are counting on me.” – Manuel Neuer

6. “After matches, the highlights show mostly the goals, scoring chances, assists. The spectator tends not to remember that, as a goalkeeper, I make difficult saves at great risk and start moves with my efforts.” – Manuel Neuer quotes

7. “I’m not the sort of person who poses in their underwear.” – Manuel Neuer

8. “I’m not the sort of person who poses in their underwear.” – Manuel Neuer

9. “I do not like the red carpet; I prefer the green pitch.” – Manuel Neuer

10. “Personal success means nothing if it isn’t aligned with the success of the team. I consider myself to be a team player more than anything else.” – Manuel Neuer

12. “I love playing football every day. I love working hard, I love training, I love the games; I love the challenge. As long as that still applies, I don’t see any reason to call time on something that makes me so happy.” – Manuel Neuer

13. “Food is a passion for me, especially Italian cuisine. I prefer to have somebody cook for me, but I can do some very nice pasta dishes.

14. “In my opinion, it is important to have a stable defence.” – Manuel Neuer

16. “I generally don’t think one’s age is all that meaningful – there are 50-year-olds who still act and think like children.” – Manuel Neuer

17. “You have to feel comfortable – then you can perform better.” – Manuel Neuer

18. “At Bayern, I was used to coming out of my box to try and clear up dangerous situations. The World Cup was just another platform, so it gave other people the chance to see me who don’t watch German football.” – Manuel Neuer

19. “I always want to play at the highest level; that’s the Champions League.” – Manuel Neuer quotes

20. “As a goalkeeper, I talk a lot to my fellow players on and off the pitch.” – Manuel Neuer

21. “A keeper has to adjust his game to the team. If the team moves further up, he has to do the same. It’s nothing I’ve invented.” – Manuel Neuer

22. “I have a lot of respect for Messi and for everything that he has achieved. He is very humble. But it’s crucial to show authority when we meet on the pitch and show him who’s boss.” – Manuel Neuer

23. “In the past, goalies weren’t even part of the team. They had their own dressing room. They didn’t speak with the other team members. They were lone warriors.” – Manuel Neuer

24. “Nervenstarke means that no matter the situation, I have to show my teammates that I remain prepared and confident and there for them. They have to feel my Nervenstarke.” – Manuel Neuer

25. “As a goalkeeper, you like to be called upon.” – Manuel Neuer quotes

26. “I am very proud to be the captain of the German national team.” – Manuel Neuer

27. “I am someone who takes a lot of time before making a decision and then has to be fully behind it.” – Manuel Neuer

28. “Winning the treble was confirmation for me that joining Bayern rather than moving abroad was the right decision.” – Manuel Neuer

31. “I am a professional player, and I will naturally do everything to be in goal.” – Manuel Neuer

32. “I do everything I can for the team’s success.” – Manuel Neuer quotes

33. “I have a good record in shoot-outs. In such moments, I’m always confident of making at least a couple of stops; I always feel the taker is under more strain. Worrying is the kicker’s job, as he’s expected to score, while I have nothing to lose.” – Manuel Neuer

34. “I am a sportsman, not a brand ambassador, besides being the first goalkeeper of Adidas.” – Manuel Neuer

35. “Before important games, I don’t change my preparation.” – Manuel Neuer

36. “Obviously, I couldn’t imagine that my career would go so well. When I first started, I wanted to play out of goal. But there was no goalkeeper, and the coach put me in goal.” – Manuel Neuer

37. “First of all, I am and I remain a goalkeeper, but I try to be involved as much as I can and to help the defenders. I try to read dangerous situations in advance.” – Manuel Neuer quotes

39. “In Germany, the football association is the best.” – Manuel Neuer

41. “It’s obvious you always have to give everything in order to succeed. That’s why playing at 80 per cent isn’t enough – not against a ‘normal’ Bundesliga team. You always have to work hard.” – Manuel Neuer

42. “Many things are necessary if you want to win games.” – Manuel Neuer

43. “I love to tackle, especially when the grass is wet, but my main aim is to be a complete goalkeeper who can do everything.” – Manuel Neuer

44. “I am convinced by my style of play, so I take risks without much hesitation.” – Manuel Neuer quotes

45. “It’s difficult to say you can replace Franck Ribery one on one with another player.” – Manuel Neuer

46. “I’ve trained under a lot of coaches and always picked up elements that develop a player.” – Manuel Neuer

47. “I think as long as I feel good and am able to perform on a high level, I will keep playing because I love football so much. After that, I have many options but haven’t set any goals.” – Manuel Neuer

48. “Schalke are my club. I used to stand on the terraces as a fan, and I’ve realised my dream of making it as a pro right here at my club.

50. “The team is the star at Manchester United.” – Manuel Neuer

52. “I took responsibility in Munich from the beginning. But I could not walk in with splayed elbows into the club and say, ‘Here comes the Schalke captain.’” – Manuel Neuer

53. “It’s a bitter thing to have one or more defenders missing.” – Manuel Neuer

54. “It’s obviously very tough for any team to lose on penalties.” – Manuel Neuer

55. “I think at the age of 30, you still have youthful aspects, but at the same time, you have gathered enough experience to know how to succeed in life. I like this mixture.” – Manuel Neuer

56. “I feel fit and well – I know that I have to look after my health, but turning 30 is no reason to start considering the end of my career.

Lewandowski is one of the world’s best strikers.” – Manuel Neuer

57. “I know that I often take risks, but it is always for the purposes of the team.” – Manuel Neuer

58. “With Bayern, we want a lot of ball possession and to control the play, so I operate sometimes like the 11th outfield player. Thus I am included a lot into the build-up play and have a lot of touches of the ball.” – Manuel Neuer quotes

59. “What’s mostly left after a match? The scenes in front of the goal where the attackers are the highlights of the play. But doing the spectacular is not particularly important to me. I just want to play for my team.” – Manuel Neuer

61. “It’s more difficult to achieve something with the national team because players from several clubs get together and less frequently.

Thanks for checking our collection of quotes from Manuel Neuer about football. 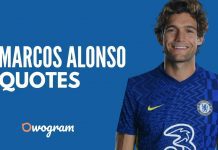 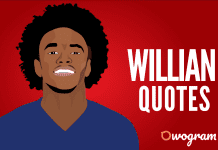 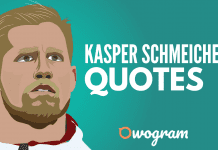 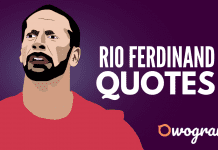 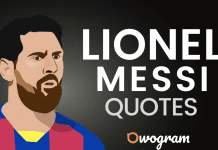