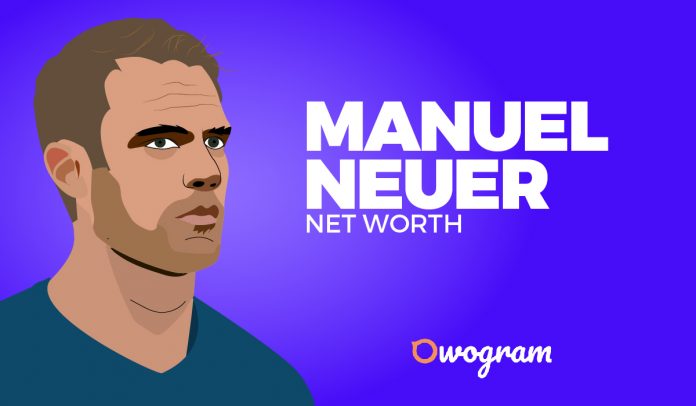 How much is Manuel Neuer net worth?

Manuel Neuer is recognized as one of the greatest goalkeepers in the world. He attained legendary status after winning a plethora of trophies both on the club and international levels.

His ability and skills on the ball are unmatched by any other goalkeeper. As a matter of fact, he was the goalkeeper that brought more acknowledgment to the term ‘sweeper keeper’ which requires goalkeepers to retain their cool, be brave on the ball, and have the excellent passing ability.

As one of the top 20 highest-paid goalkeepers in the world today, Manuel Neuer net worth is expected to match his contributions and achievement as a goalkeeper in the world of football.

Recognized by many football fans around the world as a utility goalkeeper who could play as a defender/goalkeeper, Manuel Neuer is certainly a legend with a great reputation.

Representing the biggest club in Germany, Bayern Munich, Manuel Neuer’s net worth is expected to correspond with his abilities.

In this article, we will have a look at Manuel Neuer net worth. We will also give you an overview of his early life, career, lifestyle, and so on.

Manuel Neuer Net Worth & Transfer Worth

Manuel Neuer net worth is also supported by his endorsement deals which he has with international brands like Audi, Adidas, and so on.

Due to his partnership with Audi, Manuel Neuer only owns cars from the brand. The cars are usually luxury grade with features that make them worth half a million dollars.

Manuel Neuer also owns a mansion home in his hometown Germany. Many details of his mansion are not really available considering the fact that he prefers a lifestyle away from the media.

Manuel Neuer was born in his hometown of Gelsenkirchen situated in the north of Rhine-Westphalia on the 27th of March 1986.

Similar to the popular German professional players including Ozil, Neuer was educated at the Gesamtschule Berger Feld. Football runs within the family, as his brother is a football official in the Verbandsliga.

He first came in contact with a football when he was only two years old.

He instantly developed a passion for the sport, featuring in his first game at the early age of 5. While growing up, Neuer had a football idol who he looks up to in former Schalke Goalkeeper Jens Lehmann.

Related: What is Marcos Alonso net worth today?

Manuel Peter Neuer is a professional footballer and Goalkeeper for Bayern Munich at club level, and Germany on the international scene.

He is widely regarded as one of the greatest goalkeepers to ever grace the football world through exceptional performances and unbelievable saves. Neuer has a unique playing style that sets him apart from most other goalkeepers around the world.

Known as a sweeper-keeper, Neuer keeps his cool under pressure and displays exceptional vision to give passes that split opposition defense.

He is also characterized by his speed when rushing off his lines in a bid to anticipate opposition players. These abilities earned him a place among top goalkeepers around the world. Additionally, he earned the best goalkeeper of the decade ranging from 2011-20.

Neuer started out his career from the youth system of Schalke 04. During his time within the academy, he displayed talent and abilities beyond his age.

This quickly caught the eye of his coaches and scouts at the club. Within a couple of years in the academy, Neuer was promoted to the first team of Schalke 04.

After earning a promotion to the first team, Neuer quickly got into the action as he was integrated into the team.

Neuer earned a 5 years professional contract which marked the first of his career. It also meant the start of Manuel Neuer net worth, though it wasn’t worth much at the time considering it was too early in his career.

During his years at the club, Nuerer put in solid performances between the sticks of Schalke, helping ensure the team climb to the summit of the league.

The best time he had in the Schalke jersey came in 2011 when he helped the club win the German DFB-Pokal and DFL-Ligapokal.

At the conclusion of the 2010-11 season of Bundesliga, Neuer was swiftly signed by Bayern Munich for €30 million which was a record fee ever paid for a goalkeeper by the Bundesliga club.

It was obvious the talent and ability of Neuer pushed the club to go all-in for the top goalkeeper. After he was signed by the club, he earned a contract for five years at the club.

As a result, Manuel Neuer’s net worth got an exponential boost which anyone would be envious of. His time at the club has been largely successful having won more than 25 trophies since joining the club.

These trophies include nine Bundesliga titles and two UEFA Champions League titles. Neuer reached the peak of his football career when he was nominated for the 2014 FIFA Ballon d’Or award. On 5 different occasions, Manuel Neuer was voted as part of the UEFA team of the year.

These numerous successes over the length of a decade brought significant gains to Manuel Neuer net worth. Without a doubt, his career has set him up for success on all levels.

On an international level, Neuer was selected as Germany’s number one goalkeeper for the 2010 FIFA World Cup in South Africa.  During the group stages, he only conceded a single goal.

He provided the assist for Miroslav Klose’s opening goal against England, winning 4–1. Four years later, Neuer won the 2014 FIFA World Cup with Germany as well as the Golden Glove award for being the best goalkeeper in the tournament.

Manuel Neuer’s net worth is valued at $40 million.

In one of our favorite Manuel Neuer quotes, he once said; “You can plan, but what happens on a football field cannot be predicted” – Manuel Neuer.

Summary of Manuel Neuer Net Worth

Manuel Neuer net worth is an obvious show of the vast wealth in the world of football.

Regardless of this fact, the sacrifices, sweat, effort, hard work, which he has put into building his career is much more important and gives a valid point as to why he deserves it.

Through this article, we have properly given football fans a peek into the world of Manuel Neuer. Knowing more about the superstar goalkeeper is definitely a plus for football fans, especially those who have followed his career up to this level.