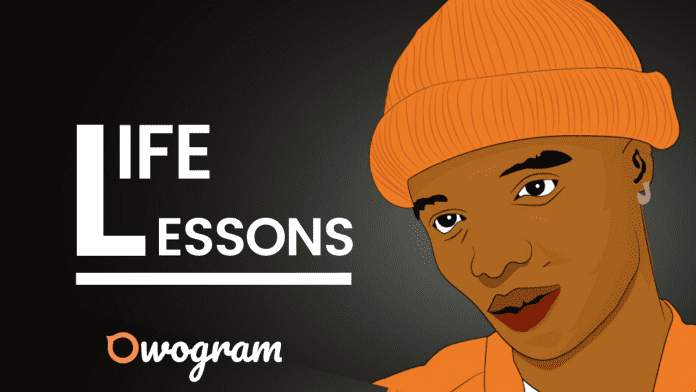 Ayodeji Ibrahim Balogun popularly known by his stage name WizKid is a singer and songwriter.

The early life of WizKid was done in Surulere, Lagos, the place of his birth. He attended Ijebu Ode Grammar School for his secondary education and later proceeded to Lagos State University (LASU).

In 2019, he dropped out of LASU and later gained admission into Lead City University. He didn’t finish up either as he dropped out after two sessions.

The name Wizkid became a household name after releasing his lead single in the debut studio album “Superstar” titled Holla at Your Boy on 2nd January 2010.

The song earned him the Next Rated award at The Headies in 2011. Learn more about Wizkid’s net worth and biography for more details.

Since 2011, WizKid as being all over his music career that he was said to be the first Nigerian musician to have over one million followers on Twitter.

There’s so much to learn from this outstanding musician about life hustle beyond music. He has impacted lives, and he wants to impact more here.

Your mentor is another person’s mentee; it’s a circle. A mentor is that person who is against you figuratively when the whole world thinks you have arrived – he wants more from you.

He will give you the support you need when the whole world doesn’t want to hear you.

Wizkid declared that Tony Elumelu, the UBA group Chairman is his mentor. He revealed this on March 22nd as Elumelu turned 57.

After secondary school, Wizkid went to two different tertiary institutions in order to further his academics. They are Lagos State University and Lead City University respectively.

He didn’t graduate from either. He wanted to study International studies, apparently, he only understands musical mathematics.

Though, he isn’t a graduate, Cyprus University presented Wizkid an award for his contribution to Nigerian music. The lack of higher education did not prevent the singer from winning awards, singing new hits and recording albums.

By all means, follow your path on time and not speculating around.

Do you know that just in seven years after Wizkid stepped into limelight via his 2010 hit, “Holla At Your Boy”, he has become a fixture in Nigerian entertainment.

In one of the powerful quotes by Wizkid, he said; “Chase your dreams and keep believing, and the sky will be your beginning”

In summary, break your own boundaries, set limit for yourself and still break it. Be your own record breaker.

Everyone has a brand but how well you show case your brand differentiates you.

Wizkid created his brand and even establish a record label. He gave a platform for upcoming artistes to showcase their talent. That is a kind of idea that will not go unnoticed.

Branding yourself up to suit your audience or client as the case may be will help your brand grow, and most importantly, will get a sit for you where you had thought of standing.

Consistency in your product or service is of utmost importance because that is what your audience will know for. Wizkid has shown consistency in his lyrical and sonic themes.

He understands his audience, he knows what they want and he has been able to deliver to them with consistency.

Set a template for your brand and maintain it through, your audience doesn’t want an undefined personnel.

Wizkid made the news of the first Nigerian musician to have over one million followers on Twitter.

Though this might not be his doing in a way, it is. He was able to prove to his fans that there is more to his music and this made people want to know him. People have millions of followers on other social media handles but on twitter, it is news.

News happens when you do something extraordinary or achieve what no one has achieved. Getting to that height is having the mindset at first.

In 2013, Wizkid founded his music label, Starboy Entertainment. That was the first step in his breakaway from Empire Mates Entertainment.

Working together with people is good but you should know the time to become independent. You will never be dependent forever.

Every stage of life comes with its own challenge, breaking away also has its own and that makes independence a difficult task for some people but it has always remained the best.

If you’re good at something, you can have a mentor; but strive to also be able to reproduce what knowledge you’ve amassed for yourself.

Spread your tentacles beyond your shores. Wizkid did not limit himself to national awareness alone; he made international relevance. He allowed himself to be opened to opportunities both at home and abroad.

Our society is such that will limit your scope of success and that’s why you have to explore every opportunity at your disposal to get international awareness.

Failure Is a Part of Success

The journey of success is definitely not a smooth one; it’s a crooked one and that’s why every successful man today rejoices at their success because they must have sacrificed a lot to attain that success.

In the life of Wizkid, that sacrifice was his education. He sacrificed education for his musical career.

He’s made a name in his career and he is still willing to make more and he is definitely not deserting that failure permanently. He is determined to take it up again.

In one of the success lessons from Adekunle Gold, NO can be a hidden YES. You will fail at some things and make mistakes, just pick yourself up and take it up again.

Wizkid said this about education:

“…I don’t regret stopping school for a bit because it did give me all the time to push and work on my music. I’m definitely going back to school. Education is very necessary and I hold it in high esteem…”

If Wizkid, a university drop out will say this of education, then education still remains powerful and cannot be traded for anything; not even riches.

Wizkid is that musician who has achieved so much with little educational status, he wasn’t limited. He didn’t allow his failure take the better part of him. He rose and took the bull by the horn – that’s facing the giant.

Did you find this piece inspiring? Tell us, which of these lessons got your attention? Use the comment box below.