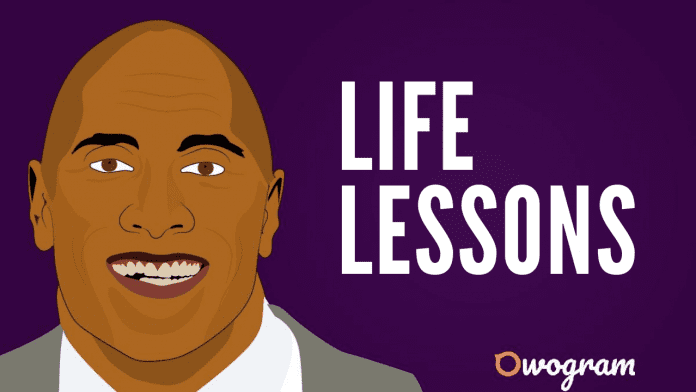 Dwayne Douglas Johnson who goes by the stage name “The Rock” was born on May 2, 1972.

He wrestled for the World Wrestling Federation (WWF, now WWE) for eight years prior to pursuing an acting career.

His films have grossed over $3.5 billion in North America and over $10.5 billion worldwide. Although he’s not one of the richest actors in the world, he’s been ranked as one of the highest-grossing actors of all time.

He initially aspired for a professional career in football and entered the 1995 NFL Draft, but went undrafted.

As a result, he signed with the Calgary Stampeders of the Canadian Football League (CFL), but was cut from the team in the middle of his first season. Shortly after, he began training as a professional wrestler.

In 1996, Johnson secured a contract with the WWF and was promoted as the first third-generation wrestler in the company’s history, as he is the son of Rocky Johnson and grandson of Peter Maivia.

He rose to prominence after developing a charismatic persona of a boastful, trash-talking wrestler named The Rock, and subsequently won his first WWF Championship in 1998.

In 2004, he left the WWE to pursue an acting career. He returned in 2011 as a part-time performer until 2013 and made sporadic appearances from then until fully retiring in 2019.

Considered one of the greatest professional wrestlers and biggest wrestling draws of all time, Johnson has won several championships, being a two-time Intercontinental Champion, a five-time tag team champion, and a 10-time world champion. He was also a Royal Rumble match winner and WWE’s sixth Triple Crown champion.

Consistently ranked among the world’s highest-paid actors, Johnson made the Time’s 100 Most Influential People in the World list in 2016 and 2019.

Here are great life lessons from The Rock that will inspire you to achieve your dreams.

When you are an actor, producer, businessman, retired professional wrestler, former American football player; only hard work could put up with this and attain success in all.

To him, success isn’t about greatness but consistency and hard work as it bring success. In his words, “be humble, be hungry and always be the hardest worker in the room”.

There is no substitute for hard work as one has to be hungry (for success in this case) and humble. He went further to say “Don’t be afraid to be ambitious about your goals. Hard work never stops. Neither should your dreams”.

The strength of a man is measured by his success (things he made through to success) and not by the number of women he’s able to satisfy. Nothing comes easy, but one can overcome so much through hard work and focus.

Determination is a requisite to getting that big break.

The Rock’s life hasn’t always been as easy and glamorous as it might look now because according to him, “In 1995 I had $7 bucks in my pocket and I knew two things: I’m broke as hell and one day I won’t be”.

It’s imperative to adopt the attitude of never getting discouraged and moving anything that stands between you and your success.

It is almost certain that there’ll be a stumbling block (s) but walking through those blocks is by determination. The determination of “I must be a success come what may”. The same determination is what makes gold a precious jewel today.

Settling for less is succumbing to defeat. “I’d rather do this one, it requires less attention or fewer difficulties instead of that big project”.

When you have this kind of words in you, trust me, you’ll only be useful for yourself, not even your immediate environment can benefit from you, talk less of being proud of you.

Whatever you do, don’t say anything is good enough don’t settle for mediocrity. One of Rock’s favorite quotes is “I will not settle for less than phenomenal”.

Shoot for quality and quantity. In order to reach new levels of awesomeness, you have to push yourself.

The Rock is a giving man. In 2006, Johnson founded the Dwayne Johnson Rock Foundation, a charity working with at-risk and terminally ill children.

On October 2, 2007, he and his ex-wife donated $1 million to the University of Miami to support the renovation of its football facilities.

The University of Miami renamed the Hurricanes’ locker room in Johnson’s honor.

In 2018, Johnson donated a gym to a military base in Oahu, Hawaii. After the 2018 Hawaii floods, he worked with Malama Kauai, a nonprofit organization, to help repair damages caused by the floods.

Johnson has also worked with Make-A-Wish Foundation on a number of occasions. The list is just endless.

Surround Yourself With The Best

We need people who call out our passions and who convict us to go further in what we are good at.

When asked what helped him have success transitioning from wrestling into acting, he said he realized that he had potentials but he needed and wanted to be around great directors, and great actors to bring out the best in him.

To have the kind of people around you who will push you, you first need to be someone who cares enough to want people to be the best version of themselves.

You attract what you are. Be strategic with who you work with. If the ones you are around the most aren’t challenging you to go farther and to get out of your comfort zone, then change your circle of friends.

Just like Tom Cruise, one of the qualities that set Dwayne Johnson apart from others is that he never gives up, no matter the struggle.

Johnson set his sights on becoming an NFL star, but everything came crashing down around him.

He could have decided to keep sulking and wallow in self-pity, but instead, he looked towards other opportunities and went after them.

Whenever the going gets tough for Johnson, he uses the hard times in the past to motivate himself. He persevered over all his setbacks to become “The most electrifying man in sport entertainment”.

“Never say ‘never’”, according to one of his movies; is just about endearing a situation believing that a tough moment doesn’t last, it will surely pass.

Be Disciplined and Be Yourself

Johnson once said that all successes begin with self-discipline, and one of the most important things one could achieve according to him is “to be yourself”.

He was proud that he didn’t let his insecurities about being a pro wrestler stigmatize him from becoming an A list actor drawing big at the box office.

Dwayne screams confidence. His public speaking abilities are legendary, and one of the big reasons he was so popular in professional wrestling.

In one of his quotes, Johnson said “when you walk up to opportunities door, don’t knock, kick it in, smile and introduce yourself”. That is confidence.

When one becomes so confident in who they are, nobody’s opinion, behaviour or rejection would faze them.

To become successful, confidence in oneself and ability must be top notch.

Always have a clear vision. Once there is clarity of vision, there will be significant progress towards the goal.

Johnson left the wrestling world and wanted to make it as a movie star.

He started out decently with the movie Scorpion King, but did not make much of an impression in his few following movies.

Instead of moping around and blaming others for his failure, he called for a meeting with the stakeholders managing him, during which he outlined his end goal.

His vision was clear, “I want to be Will Smith, only bigger and different. I don’t know what that means but I can see it!” With that clarity, everyone around him rallied to make his dream a reality.

Also note, that your vision is seen and clear to you only and it is in your hands to make it a reality. Do not wake up from that vision as some people will say “you can always wake from a dream”.

Have your dream/vision and never wake until everyone can see it.

Johnson is always calm regardless of the hurdles encountered.

He is loved by those who work with him for his calmness and ability to be pushed hard. As an athlete, he understands being pushed very hard and never gets annoyed or upset with reshoots or mistakes on set.

Also, when you get upset about issues, you should not sulk, instead, like Johnson, you should shoot for a resolution. To become successful in life, we need to learn to be calm even in the face of obstacles.

Dwayne Johnson moved into Hollywood and became a successful A-list actor without any acting background, experience, or qualifications.

According to him, his childhood has shaped the strong core values he lives by today. His life has inspired many as he is someone who has truly made the most of life’s opportunities.

His life is the ultimate example of what happens eventually when you are the hardest worker in the room, when you believe in yourself and remain humble.