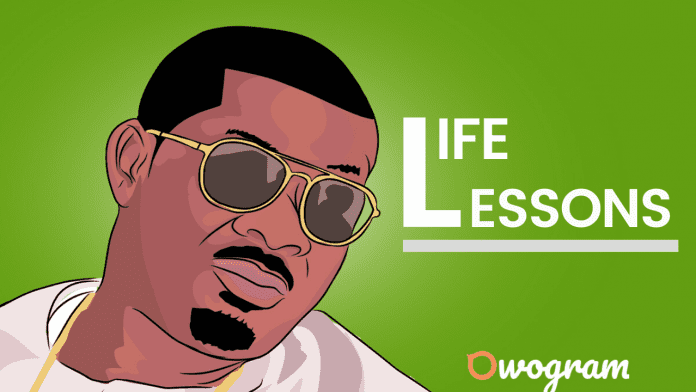 Following the closure of the aforementioned record label, Don Jazzy set up Mavin Records on May 8, 2012.

Don Jazzy is probably one of Nigeria’s top ten richest musicians. His Net Worth speaks so highly of how far he has come.

Would you mind learning from the legendary music producer with a unique pedigree?

This article presents you with 10 important life and business lessons from Don Jazzy.

1. Think Outside the Box

Flobyt Wifi is a free, fast, reliable and easy to use wifi service across partnered locations. It is designed to replicate you ‘at home’ wifi experience when you’re out and about.

Launching this amazing technology is just about making use of the trending activity, which as of now is vast technology that brings comfort to people.

With this idea, Don Jazzy was able to think beyond the usual – outside the box. A core value of successful entrepreneurs.

You don’t do the same thing the same way and expect a new result, creativity is the code.

The popular phrase ‘birds of a feather flocks together’ can be ascertained in the life of Don Jazzy.

At every stage in his business carrier, there’s always someone with which to rob minds. First, while launching Flobyt Wifi, the establishment of Mo’Hits records, establishing Mavin Energy etc.

Having like minds around helps to boost your morale and also helps to keep the mission alive.

Of course, there are times when things will look so impossible or task will seem unachievable, this is where your association of like-minds come to play.

3. The Power of Partners

As rich as Don Jazzy is, he ventured into most of his businesses as a partnership.

He partnered with D’Banj to establish Mo’Hits records in 2004. He also associated with Solek and D’Banj which gave him more interest in the music industry.

Partnering does not mean you’re poor or incapacitated in any way to act alone, sometimes, you won’t always be available for the job, it is your co-pilot – partner – that keeps the work going.

It also helps in achieving more, as there are new and different ideas coming in from different people. There is also room for other businesses, you don’t necessarily have to keep mute.

The popular songwriter and business entrepreneur, Don Jazzy did humble himself to learn more in the music industry.

When we speak of Don Jazzy and his production skills in the music industry, we remember Emeka Infiniti and O-Town record company.

At O-Town record company, Don Jazzy learned his producing skills and Emeka Infiniti was his boss.

Today, Don Jazzy is estimated to rank fourth in Africa and first in Nigeria on Forbes’ 2017 list of top bankable artists in Africa.

Yet, there was a time when he was learning. Learning is a part of development. When you stop learning, though you grow, you stop developing.

Starting small is never a bad idea, if you have your capital, good for you, go for it. If not, ‘poco a poco’ as used in music which means ‘little by little’ does the magic.

It should not be to your amazement that the elegant songwriter Don Jazzy, used to be a security guard at McDonald’s back in his days in London.

Being a security guard did not cost him his integrity, neither does it lower his self-esteem.

If his position at McDonald’s has done anything it has added to the story of his life and his humble beginnings.

In 2011, Ajereh was employed by Kanye West as a producer at Very Good Beatz. Ajereh worked with Jay-Z and Kanye West on the production of Lift Off, featuring Beyoncé on the album Watch The Throne which was released on 8 August 2011.

Mavin Records produced some of the definitive music and artists such as Wande Cole, Tiwa Savage, and Reekado Banks.

As the digital era continues to refashion the way we do things, Mavin’s taste for delivering the utmost value has inspired the company’s expansion into innovative services such as partnerships, content production, publishing, and marketing.

Today, Mavin is a community of amazing people dedicated to creativity, innovation and breaking new frontiers. – a vision by Don Jazzy to achieve. And yes, he achieved it.

7. Work With the Heart

In one of Don Jazzy’s quotes, he says, “… work with the heart, it is not every time that you go for skills”.

Having the skill is important while following the heart is more important. Don Jazzy studied business Management in Ambrose Ali University, Epkoma.

He went to the university to learn the skills of business – important. Together with that, he followed his heart by venturing into the music industry – more important – an art that has been his passion at an early age of his life.

Therefore, while you’re acquiring skills to be better at something, make sure to follow your heart as well.

In a world where there are almost no new things, you must strive to do same thing a new way and that’s your brand.

Don Jazzy in creating his brand “Marvin Energy Limited” specializes in the supply of petroleum products such as diesel, petrol, kerosene, cooking gas t homes and companies. A company that works 24 hours a day.

In 2012, the duo Don Jazzy and D’Banj closed the Mo’Hits Records for reasons best known to them.

For whatever the reason might be, Don Jazzy will not relent in his passion for music, he was never discouraged, he went ahead to establishing the Marvin Records.

Growing weary does something to the soul, of course; but not something good. No matter the discouragement, just make sure something is constant – moving.

10. Do Not Limit Yourself

Jack of all trade, master of ALL is not an impossible saying as portrayed in the life of Don Jazzy and also is better than “master of ONE”.

The general belief is that when you venture into a lot of things, you are only good at one.

Don Jazzy’s entrepreneurial lifestyle has been able to defeat this belief by way of venturing into music, technology, oil, and gas, etc. and he’s doing well at them. This is self-commitment and determination.

Therefore, do not limit your status quo to doing one thing when in actual sense, you can multi-task.

All you need is start small, stay humble, be open to learning, be vision-driven, follow your heart, aim for the best and the sky is just the beginning.

Did you find this piece inspiring? Let’s have your thoughts in the comment box below.