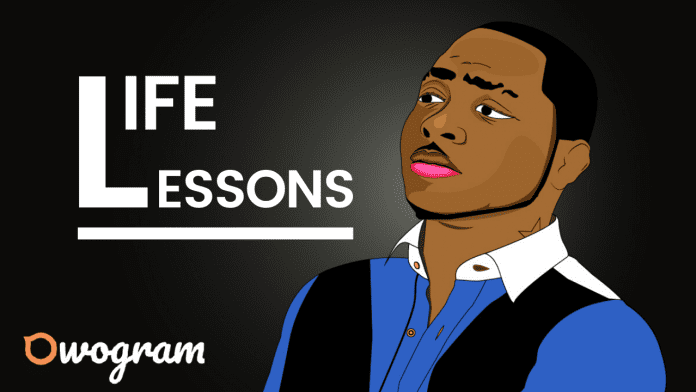 He is worthy of emulation, he is rich, he’s got brains, he’s got the music.

The American-born Nigerian song artist, Davido was born into the families of Adediji Adeleke and Veronica Adeleke.

He was born on November 21, 1992, in the Atlanta city of Georgia, U.S.A, and christened David Adediji Adeleke. Today, he is a singer, songwriter, and record producer.

We can say that his musical career started at Oakwood University when he bought musical equipment and started making beats with it.

In the process, KB International was formed working together with his cousin B-Red and Sina Rambo and that was the beginning of the journey.

Davido ventured into the music industry full time with his first debut album “Omo Baba Olowo” and has remained active since then to date. Today, he is one of Nigeria’s biggest musical artists.

Of children born with a silver spoon in their mouth, Davido stood out, he worked for his money, his name and his fame.

Here are 10 remarkable lessons from Davido’s personal life and music career that will inspire you.

Davido’s father, Adedeji Adeleke is a Nigerian Business magnate and by default, the children are expected to join the family business after school.

Maybe expected of a child who finished school but Davido did not even finish his course in Business Administration before he dropped out of school.

This must have made his father disappointed in him being his second son.

Davido did not allow this to dictate his direction, he has his dreams, he has his God-given potential and he follow his dream even against his father’s wish.

Trust me, Davido might have made a terrible businessman but thanks to God, he isn’t wasting away. He and his team have contributed immensely to the music industry both in Nigeria and outside.

Though, people might not see the potential in you, don’t blame them for it. It is your responsibility to carry your potential and make the best out of it.

Humility Is a Virtue

Despite Davido’s insistence on not studying business Administration, his father still wanted him to have a tertiary certificate – that was necessary.

So his dad enrolled him into Babcock University for him to pursue his dream and he in return had to pause his musical expedition for some time.

That is what I call humility, his father has respected his decision not to join the family business and him in return, studied music in the university.

Humility is a virtue, sometimes it is the only thing that will open a particular door, ensure you have it. It not only opens door; it shuts pride off.

Today, Davido is one of the products of the top 10 Universities with the highest number of celebrities.

You are Your Better Self

There is a fact that no one knows you better than you do. In the same vein, no one can be a better you, other than yourself and the world deserves to see a better you every day.

Davido knows this and he strives to be a better of himself every new day. This brought about ‘DMW’ Davido Music WorldWide in 2016.

He founded it shortly after signing up with Sony Music and several talented musicians like Mayokun, Dremo, Peruzzi, etc. have signed under this label imprint.

Never be Satisfied With Your Success

Being satisfied with a stage of success could be related to pride and as earlier said, once pride is opened, new doors won’t show up. There can never be a peak of success.

Success to some people might be, being the talk of town in the music industry, others can be collaborating with a foreign artist, others can be winning the Grammy award – there’s absolutely no climax in success.

Just like one of the life and hustle lessons from Patoranking, ‘do not set boundaries’. You continue to climb because there’s always more records to break and more heights to attain.

Open your mouth and tell your story yourself, because if you don’t, others will tell it for you, and in most cases might not be in your favour.

Telling your story isn’t pride, its authenticity and confidence.

Davido said once said, “me and my team made half a Billi!! Facts!!”. Say it out for people to hear, else someone else will say it in a way that will reduce its quality.

Since Davido started his musical career, he has been so consistent with the release of hit songs.

He released another even when his fans are still enjoyed ones that have been released. That’s Davido for you and this act has helped him maintain his name in the industry.

With hard work and of course consistency, he has been nominated and has won numerous awards:

The above is just a few. Embrace consistency in every work and getting an award or recognition will be part of your lifestyle.

In any form of industry, there’s what is called competition and when your competitor realizes he cannot overtake you, he’ll resort to stopping you.

Davido has had a record of beef-settling issues with Kaffy, and even reconciling with Chief Dele Momodu, and now Burna Boy, it’s part of the game.

But he simply didn’t allow that stop him, instead, he’ll come out stronger. That is what you should also emulate.

Every upcoming artist and well known artist do well with collaboration.

It doesn’t belittle you or make you any lesser than your partner, it’s room for learning.

And when you want to do your things your way at all times, you don’t improve, you become stereotypic in your work and your audience will definitely want something more and new.

For example, Timi Dakolo featured Olamide in a song Titled ‘Take It’. Who could say that this will be possible comparing their styles of music?

Davido has done a lot of collaborating work with fellow musicians and he is still Davido.

Be a Reflection of Who You Are

Working with people and making them happy makes a good working environment. Show people who you really are with love, kindness, and happy moments.

Davido has shown love and kindness to many people, mostly his fans, and even some celebrities. In one of the powerful quotes from Davido, he said; “we rise by lifting others”. Davido is just a humble giver.

Be True to Yourself

People will give you reasons to doubt yourself most especially when they do not want to see your success; some, out of fear of the unknown.

But you are the only one who knows where you’re going, you might not know how to get there, but telling yourself “this is where I’m going and I’ll get there by all means” is the first step.

Davido took such bold steps in the past and he is a force to reckon with in his chosen career today. He followed his dream and became a star in the music industry; a friend; a philanthropist and a father.

Which of these lessons resonates more with you? Let’s have your comments.