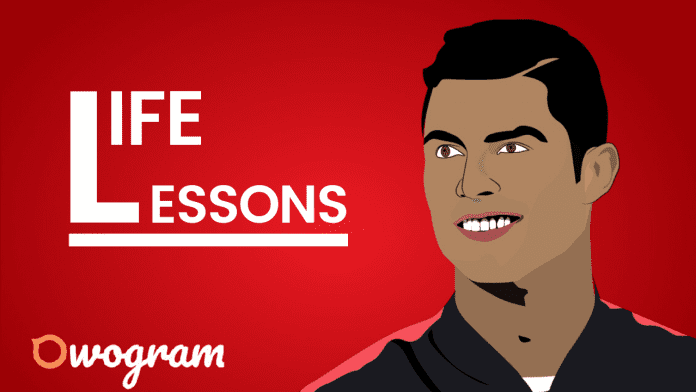 He is often regarded by many as the greatest of all time with lots of trophies to attest to this.

Cristiano Ronaldo is a 35 years old Portuguese football player born and raised in a poor town of Madeira in Portugal.

He plays the forward position for a serie A club called Juventus and also Captains the Portugal national team.

He got sold to Spain’s Real Madrid in 2009 for a world record transfer fee of £80 million and finished his Real career with 311 goals in 292 matches.

In July 2018 he reached a four-year contract worth €112 million with the Italian club Juventus and still plays there till date.

He is a prolific goalscorer and holds the records for the most goals scored in the UEFA Champions League (128) and for the most hat-tricks in recorded history (56).

There is no doubt that Cristiano Ronaldo is one of the richest football players in the world.

He is undoubtedly at the apogee of his career and his success has inspired a lot of persons to becoming the best.

He rose from the streets of Madeira and conquered the World and He has proved his worth in different leagues against the best players and best teams.

Here are big career and life lessons from Cristiano Ronaldo:

Be Resilient and Focused

Resiliency is one of the inspiring lessons gotten from the life of this football icon.

He was almost denied making it as a footballer at all: at age 15, he was diagnosed with a racing heart which could have made him give up on his football dreams, but recovered after undergoing heart surgery and resumed training immediately.

Resilience cannot be over-emphasized in the journey of life. There are some things that won’t come to you on a platter of gold, if not most things. Then, why not continue pushing for it without doubted mind?

As the English man will say, “If you’re doing something and you’re not criticized, you’re not doing anything”.

If this setback had deterred Ronaldo, he wouldn’t have become the football star he is today; if you focus more on your critics than your dream or passion, you will have no place in the society.

I laugh when people complain about their choice of career, “it is too stressfull, I’m even tired”.

Then, I wonder “what will put food on your table without HARD work?”. Maybe some menial jobs will put the main dish on your table but certainly not 3 full dishes.

Mind you, no man is born to be poor because we’re meant to be hardworking.

In the case with Ronaldo, his hard work pays off as all his effort made him the first highest paid footballer and the third-highest paying sportsman according to Forbes publication.

He is known for the rigorous training he undergoes to keep him ahead of the game which most believe makes him an undisputed champion.

His hard work is also evident in the collection of trophies to his name. He is a testament to the saying that while talent is important, hard work trumps talent.

Despite being born and raised in an impoverished home, it never deterred him from attaining success and being at the top of the game.

His career almost ended before starting when he was 15 because he underwent a Heart Surgery to solve the problem of Irregular Heartbeat, which kept him out of work for almost 10 weeks.

His hardwork, discipline and never giving up attitude has made him a success that he is today.

No doubt, life gives some people tough decision sometimes; but just as the holy book says, “no crown without a cross”. That is, accept every obstacle that come your way as a cross to achieving a crown.

And you know what, “a crown is a crown”

Of high importance is dedication. Ronaldo is one of the most dedicated players as he never misses training and gives his best whenever he is on the pitch.

Ronaldo takes his training sessions seriously to push his limits. He never shies away from hard work.

He trains for many days and works until everything goes right and only then is he satisfied. Ronaldo is passionate about Football that he wants to win always and doesn’t want to lose.

The word ‘defeat’ never entered his head. Whether it was at training, exercising, or playing a prank, he had to come out on top.

I’ve come to realize that those who complain about work are never even dedicated.

When you’re dedicated to a cause, you accept both liability and asset. Yes, the liabilities might be the first things you encounter, but it can be as much as the asset you’ll gain in it.

Most people call this the CR7 confidence and it’s one of his most powerful asset.

Ronaldo has a reputation for vanity and arrogance, but to him, self-esteem is an important attribute to possess, and to him, he is the best player in the world.

In one of Cristiano Ronaldo’s quotes, he said; “I’ve never tried to hide the fact that it is my intention to become the best”.

He has always believed in himself, without which he would have never achieved the level of success he has attained.

We are in an era where it is your ability that speaks for you. So boost that ability and don’t be too shy about telling people. Be super-confident that you can still achieve a 90% excellence in a new task.

Yes, here we are again about being positive on whatever life has presented to you.

Ronaldo never gets deterred by criticism, instead, he believes their love makes him strong, while their hate makes him unstoppable.

To him, he cannot live being obsessed with what other people think about him which is an inspiring attitude worthy to be emulated.

Always see things from the positive view, it helps the state of mind as well as the psyche. Don’t be too hard on yourself. Live every moment to the sweetest and you’ll never see the bad side of things.

Learning is a continuous phenomenon, learning stops when the heart stops. Ronaldo is a tactical player and one who didn’t relent on learning.

When his opposition started to figure out his moves, he improved his game in different areas and kept learning new tricks to enable him to remain the king of football.

What is appealing to see in Ronaldo is that he’s never satisfied with himself. He searches for more and looks for ways to improve him and his game. This has made him evolve into the great player he is today.

Every walks of life are competitive, being a step ahead of your contemporaries is what will always give you an edge as the case is with Ronaldo.

Do not lean on past glory, learn more and evolve in new things.

Pushing Oneself to Becoming the Best

Cristiano Ronaldo does not seem to ease up his training regimen and learning tasks. He continued pushing himself hard and obviously stayed ahead of the game.

He believes that being the best means proving it in different countries and championships which he has attained.

His tackles, dribbles, deceptions, kicks and headers are all top-notch. His game has only kept improving and reaching new levels each year.

He is one rare breed of footballers willing to do anything to win, and his insatiable hunger for goals and an unquenchable thirst for success has made him one of the most feared players on the planet.

When you get to a certain stage and you’re satisfied with your success, then you begin to depreciate (one-time best footballer).

No man has attained the best, so always push for that best and the better best and best best.

Just like you’ll see in one of the 10 inspirational life lessons from Lionel Messi, having a purpose in life is very pertinent.

At a young age, Ronaldo’s purpose has been to be the best football player in the world. For him, being good is not enough, he has to be the best.

Winning is the most important thing to him and to consistently play well and win titles is what drives him to train hard. His only goal has always been to be the best.

Ronaldo didn’t do football because of some pressure and that’s why he could be where he is today.

Your own purpose might be writing or singing. Trust me, there are best writers in the world, you can become that as well if only you have a purpose and follow-through.

You should check out these 10 practical steps to achieving your dreams and stay purposeful. You’ll definitely find it helpful.

Giving Back to the Society

He was named the world most charitable sportsperson in 2015 owing to his charitable contributions to various causes.

When the tsunami hit South East Asia, Cristiano flew to Indonesia to help those in need and auctioned off a few stuff to help raise funds for charity.

He believes his star status will help him reach out to others for help and hopes to get involved in more charity projects in the future.

In addition to his charitable contributions, he also donates blood regularly.

Ronaldo is one celebrity who will do anything for the people around him. He couldn’t tattoo his body as other celebs because of his contribution to the health sector by donating blood on a regular basis.

If life has given you quite a number of opportunities, don’t squander it alone. As a matter of fact, it isn’t meant for you alone. People around you should be a beneficiary of your status.

On a final note, to become the best, believe in yourself, never let setbacks affect you, and always be a step ahead of your competitors.

Above all, never give up on your dreams and always work hard to hone your skills.