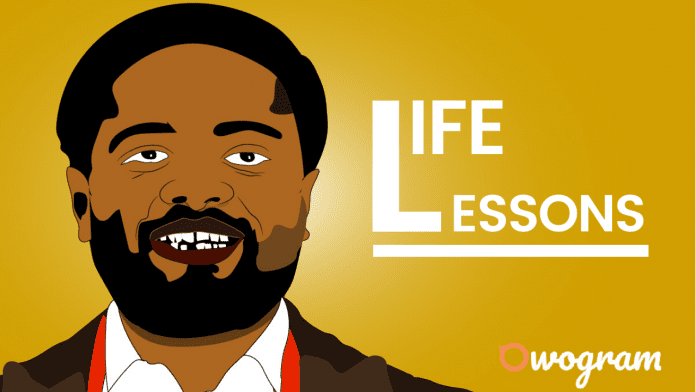 Cobhams Emmanuel Asuquo, a Nigerian musician, producer, and songwriter is one of Nigeria’s unique musicians. He was born into the Asuquo’s family on 6th January 1981.

Asuquo started his musical career in 2005 when he was signed on with song ATV London as a songwriter.

Later in 2006, he set up his record label Cobhams Asuquo Music Productions CAMP.

In 2016, he started Vintage Gray Media, a company geared towards discovering nurturing and exposing extraordinary talent and also creating different forms of audio content for corporations and the radio.

Going back to Asuquo’s early life, he started out as a law student but didn’t go very far as he stopped in his third year to pursue music full time – a lifelong desire he nurtured.

In an interview with him, he said “I left law to pursue an ambition or a calling that I found to be very rewarding. I feel the experience I gained from the few years of studying law also came in very handy”.

He is into full time music production – something he is well known for.

The music artist, though visually impaired was unstoppable. He is happily married to Ojuolape Veronica Olukanni and blessed with a son.

Let’s see one or two things that has inspired us about his music and life style generally.

It is a known fact that Cobhams Asuquo is visually impaired. In spite of this, he didn’t expect everything to be done for him.

He worked out his success with his bare hands.

Though, he has so many people to thank for that, starting from his mother when he was young.

After confirming his virtual status to his mother by the medical practitioners, she resigned from the army as a clerical officer in order to take care of his son and also to prepare him for the future she trusts will be great.

Cobhams Asuquo has his wife to thank also. She has been with him this long and Cobhams Asuquo only has to praise her for her steadfastness.

Giving excuses about your inability to do something for something you have no power over, is worse than any ailment whatsoever.

Every profession has its own skills. Just as music has its, so does production and all that.

Cobhams Asuquo does not want to seems like a half baked bread, of which if he were to be, we wouldn’t be talking about him today.

He learnt the arts involved in his profession in order to give Nigerians the best.

In his words during an interview, he said “I think our music is a reflection of the state of the country.

If you want people to make good music, you should educate the music makers and empower them.

If music makers are better educated, they would make music that would educate the masses.

Mind you, do not wait to be educated with the help of someone, educate yourself.

Mold Yourself for Fame

Even right from his birth, his mother has been preparing him for fame. He didn’t just work for money.

If that were the case, he might have followed through with his academics in law.

Since he has chosen the path of entertainment, he made himself available for every kind opportunity whatsoever and that is why today, the Nigerian Music Industry can be talking of Cobhams Asuquo, the extraordinary musician.

Like Cobhams Asuquo, he chose the path of fame and he worked towards it and he achieve it.

Put the Brain to Full Work

In the case of Cobhams Asuquo, he is a producer guru, a musician, does media and many more.

No man sits and wait for a business to come through. Involve yourself in so many task, you’d even be surprised how vast your brain can be.

It is even recorded that man is under-utilizing the brain (on a lighter note).

In the real sense, that the brain does not have so much challenging work to do even makes it not functioning in full capacity.

Put your brain to work by getting involved in multiple tasks – legit tasks – and you’d be surprised when harvest times comes. As a matter of fact, every day will be your harvest day.

You have to be known for something, a good thing of course. For Cobhams Asuquo, it is the ability to bring out the best in himself.

There are many youths out there, physically fit to engage in all kinds of work but they just want to be spoon fed at every time.

Work for Passion and Money will Come

Cobhams Asuquo, just like every other child wanted to study law. I do not know the motivation behind that but when he finally realizes that his passion does not lie in law; he did not mind dropping out of school.

This action of his is what can be referred to as chasing your passion. He chased after his passion at once.

In his words, he said “Music has become a means to an end for a lot of people. It has become the alternative to fraud and all other dubious means of obtaining wealth.

I feel a lot of young people believe that they have a shot at making it through music. And this reflects the kind of music that is created.

This kind of person definitely cannot go far as frustration will set in sooner than later. That’s the consequence of pursuing money instead of passion.

When you reach a certain milestone in life, impacting in the lives of people should be the next point of achievement.

Cobhams Asuquo spoke up for the sexual violence that has been prevalent in Nigeria. He titled this new advocacy as “Her story, our story”. Making victims involved in sexual assault feel unashamed to come to the open with their story.

It is no doubt true that Nigerian youths are being faced with sexual assault every now and then, and have no forum or platform to speak up without being stigmatized.

Cobhams Asuquo decided to help people in this situation tell their story.

Not one of these category of people will ever forget Cobhams Asuquo in their lives, if we all emulate such, then, violence, if not eradicated, will be at its minimal level in our society.

Aim for the Best

Cobhams Asuquo is definitely not a lazy man. He puts his best into his works.

This is evident in the production of the debut album by the Nigerian soul sensation Asa.

He also wrote several songs on the award-winning album including the hit singles, “Fire on the Mountain” and “Jailer”.

He has arranged music, performed with bands both national and international. All his works are aimed at the best and he gets the best.

If you want the best, aim at it, work for it, and the best is all yours.

Do You Know Your Calling?

Cobhams Asuquo termed his interest in music as a calling. That’s quite different from perspective of other musicians.

Having a calling means, you either do it or you are a nobody. He sees music as a thing of life or death. Good for him, that life or death of a thing makes him today.

When you see your passion or desire as a calling, working for the best won’t be an option, it becomes paramount.

When your passion is your calling, pursuing money won’t be an option, it won’t matter.

Be the change You Want to See

We are in a society where everyone complains of one thing or the other that the government isn’t getting right.

Why not complain less, and let people see the change in you?

Cobhams Asuquo realized that the music industry isn’t what it ought to be, people sing, yes, but not passionately; mostly for the money, and you know what? People’s lives are not enriched by their music.

He releases songs that one way or the other inspires people. He said, “My music is inspired by how I feel and how other people feel.

Sometimes, it’s just raw inspiration that literally drops from heaven and it has nothing to do with me. My music is inspired by my story which is that of possibility.”

The veteran musician, Cobhams Asuquo is indeed a blessing to those who might want to think that hope is lost for them, or this life isn’t meant for them.

He has managed to reach out to them and encouraged them. Let your life tell a story. The story might not be read today; it might be tomorrow