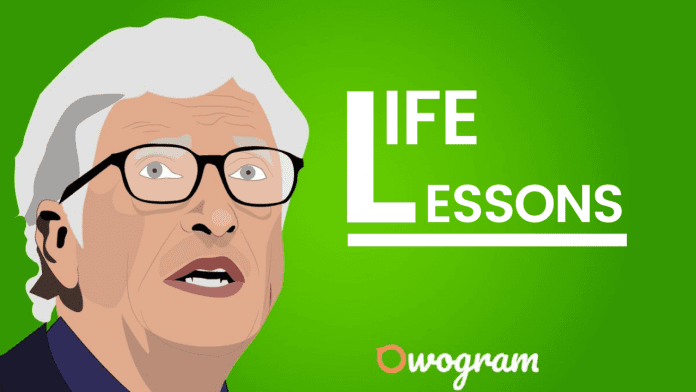 William Henry Gates III, born on October 28, 1955, is an American business entrepreneur, software developer, investor, and philanthropist who is best known for his work with Microsoft.

His most well-known accomplishment is as a co-founder of the Microsoft Corporation. From 1985 to May 2014, Gates held the offices of chairman, chief executive officer (CEO), president, and chief software architect at Microsoft, where he was also the company’s largest individual shareholder.

He is one of the most well-known entrepreneurs and pioneers of the microcomputer revolution of the 1970s and 1980s.

Bill Gates is currently one of the world’s wealthiest people, ranking among the top 20 richest people on the planet.

He began attending the exclusive Lakeside prep school when he was 13 years old, where he built his first piece of software.

When he was in high school, Gates developed an interest in programming the General Electric system in BASIC, and he was granted an exemption from math classes to pursue his passion.

A tic-tac-toe implementation that allowed users to compete against the computer was written on this machine by him, and it remains his first and most important software to date.

Gates was captivated by the system and the way it consistently executed software code properly.

He collaborated with Harvard computer scientist Christos Papadimitriou to formalize and publish his solution.

Every year since 1987, he has appeared on the Forbes magazine’s list of the world’s wealthiest people.

These life and hustle lessons will inspire you to achieve your dreams.

Helping Those in Need

Ever since he left the day-to-day operations at Microsoft in 2008, Gates pursued a number of philanthropic endeavors.

He donated large amounts of money to various charitable organizations and scientific research programs through the Bill & Melinda Gates Foundation, reported to be the world’s largest private charity.

In 2009, Gates and Warren Buffett founded The Giving Pledge, whereby they and other billionaires pledge to give at least half of their wealth to philanthropy.

The foundation works to improve global health, and is working with Rotary International to eliminate polio.

Always remember that you are a product of some people’s help, helping others should be your favourite meal. By so doing, you help the society at large.

Be Ready to Takes Risks

Starting a business is a little bit like gambling, you’re not always sure if you’ll win or not.

However, the only difference is that you can strategize and plan well enough to ensure the success of your business.

In one of Bill Gates quotes, he said; “If you want to win big, you sometimes have to take big risks.”

This quote from Bill Gates is not only applicable to entrepreneurs, it can also apply in life as a whole.

Life has no rules and you have to sacrifice certain things to get to your destination.

His conviction and risk-taking propensity made Microsoft such a hit even when no one knew much about computer software.

Not everyone has the luxury of taking risks in life, but there is always a leap to be made, and sometimes you just have to push your doubts to the side and jump

Learn from Your Mistakes

Never try to blame others for your mistakes: Your mistakes are on you, they are not anyone else’s fault.

Mistakes are made to be learnt from. You now know what or what not to do in the same situation when it rolls around for a second time and believe me, in most cases it will roll around again.

If you mess up, it’s no one’s fault, so don’t whine about your mistakes, learn from them.

According to Bill Gates, “Its fine to celebrate success but it is more important to heed the lessons of failure.”

Failure is just as important as success, because it takes you back to the starting point and helps you analyze the loopholes and causes of failure.

As a result, you can fix any issues and avoid making the same mistakes again but this is not possible when you succeed.

Consider failure as a learning opportunity instead of a demoralizing factor that forces you to quit.

Before the inception of Microsoft, Bill Gates and Paul Allen started Traf-O-Data, a company responsible for analyzing traffic data. Unfortunately, it failed miserably and left Gates under a lot of debt.

He learned important lessons from this failure and moved on to launch Microsoft.

Even with Microsoft, he faced initial failure but his unflinching attitude helped him dredge on.

Finally, success knocked at his door and he got the reward for not giving up on his dreams.

No matter how difficult the circumstances seem, you should have a “never say die” attitude if you want to succeed.

Failure is part of life and it even affected the greatest and most successful people in the world.

Bill Gates and Paul Allen started Microsoft on a shaky foundation, but through patience and hard work they were able to surpass the struggles they encountered.

Patience is a key element of success, as there are no shortcuts to success.

Nothing comes easy and that includes being successful: It takes time to build an empire and a lifetime of sacrifice to keep the consistency going.

Surround Yourself with The Right People

Bill Gates built a culture of the best and brightest and was good at convincing his friends, such as Paul Allen and Steve Ballmer to join him on his adventures.

By surrounding himself with smart people, Bill was able to scale. He also had a sounding board for ideas.

More importantly, ideas could get better from the combined smarts and perspectives.

Bill also knows how to complement his strengths by having the right people around that make up for his weaknesses.

Don’t go at it alone. You’re better when you have the right people around you.

Be Humble at All Times

It’s best to stay humble at all times and never forget how you got there in the first place.

It’s great to dream of success and all that comes with it. However, if you let it get into your head and start to think that you’re untouchable, that is not what you call success.

Life is a wheel, it’s unpredictable. You can be on top today, but at the bottom the next.

Gates is an avid reader of about 50 books a year and one of the mindset required to build success, according to him includes having an unquenchable desire to learn and a sense of wonder and curiosity about how things work.

Gates said that being curious, knowing what you are and aren’t good at and keeping an optimistic attitude are attributes that will take people far.

These qualities are the same that propelled him, what he looks for in people who work for him, and what he thinks the current generation needs in a growing world of technology, artificial intelligence and global challenge.

Gates said, “For the curious learner, these are the best of times because your ability to constantly refresh your knowledge with either podcasts or online lectures is better than ever.”

Continuous learning brings in new ideas and that is how notable people in our society today has made an edge.

Even in good and not so good condition, ensure you’re always learning. Always go to bed at night with something new or a new way of doing things.

Gates focuses on the one thing he knows best, which is software, and then he makes it the best it can become. Knowing something is much different than having wisdom.

He worked hard to dominate his industry, made execution a top priority, and stuck with the skills that he considered to be his strongest.

Moreover, this quality is still evident in him through the work he does with his charitable foundation.

Be Passionate About Your Dream

Gates pursued his passions rather than continue with promising conventional careers.

Gates had been passionate about computers since he was a boy attending Lakeside School.

There he would spend so much time in the computer lab that he was reprimanded by teachers.

Gates spent a similar amount of time on personal computers while attending Harvard, and rather than finish his degree in prelaw at Harvard, he stubbornly pursued his passion until it became a success.

Gates put a lot of love into everything he did for the company, and his belief is that if something is worth doing, then it is worth doing to the best of one’s ability.

If you must follow a path, follow through with every strength you’ve got. The society does not give recognition to half-baked success.

Bill Gates is regarded as the most successful entrepreneur in the world, and he didn’t just achieve this feat by wishful thinking but worked hard to achieve it.

His passion, persistence, perseverance, focus and doggedness all contributed to his success.

He had a vision and he worked towards it and amidst failure, he never gave up but learnt from his mistakes.

These traits are what contributed to his success and they are worthy to be emulated by coming entrepreneurs.

Did you find this piece to be helpful and inspiring? Let’s have your comments!