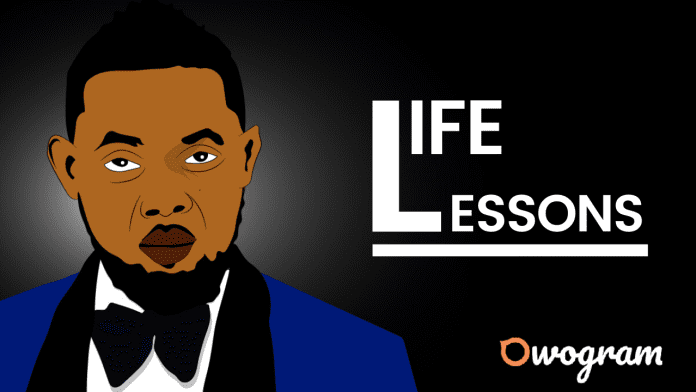 He was born on 19th August 1971 in Warri, Delta state. Though he hails from Ifon, Ose local government, Ondo state, he preferred being identified as “Warri boy”.

He is a graduate of Theatre Arts in Delta State University, Abraka. A.Y has discovered his passion for entertainment as at when he was in school.

He was nominated for awards and won several awards as well such as the most fashionable student on campus (1999 and 2000); best show-biz promoter (2001) and the Jaycee Club socio-personality award (2003).

After school, he continued making milestone as the host of the A.Y live shows and A.Y comedy skits; as the producer of 30 days in Atlanta (his first movie); as a UN Peace Ambassador; and lastly as the CEO of Corporate World Entertainment Nigeria.

This organization – CWE – was established to focus on organizing live events ad providing contents for radio television. This is entertainment all the way.

It would interest you to know that A.Y used to be personal assistant to Alibaba Akporobome and also event manger.

He said event manager would have been his second option to entertainment.

The name A.Y came to limelight after his performance at a comedy show hosted by Opa Williams in 2006. Since then, he chose to always be at top of his game.

Lessons from the Entertainer A.Y

Let’s see a few of the numerous lessons we can learn from the impeccable entertainer.

Work Continually on your passion

I prefer referring A.Y as an entertainer, though that’s indeed what he does, he does it all through his life from maturity till date.

He has been an entertainer even in his days in the university.

He doesn’t mind the perception of people towards him, all he cares about is entertainment.

As a dreamer, or someone who has identified his gift, it’s not until you have that big capital before you begin that project.

If you’ve identified your passion as early as a tender age, do not loiter around waiting for sponsors, continue to do work in the little capacity you have, and who knows, that big project that will make you to limelight might just come then.

Be Opened to Opportunities

Entertainment is not limited to an aspect, say comedy, no.

It’s a multifaceted platform that gives room for anyone to showcase his God-given talent. A.Y Had this opportunity and he utilizes it to the fullest.

He made himself available to any opportunity and above all, always willing to take up a new challenge.

This made him whom he is today. Some of the platforms that gave room for A.Y are:

No doubt about it, when you’re good, there’s the opportunity of seeing yourself anew every day, do not limit confine yourself to a business when other legit businesses are there for exploration.

Make Your Failure a Stepping Stone

During the days of university, A.Y studied Theatre Arts at Delta State University for nine years. That’s over double the years he was originally supposed to use.

His colleagues whom they gained admission together, some are probably married, some working in a multi-million company while he is struggling to graduate.

But you know what, he conquered and the beautiful thing is he made the best out of it.

Failure is not a disease and most importantly, failure only endears for a night, and then success comes in the morning.

A.Y was not ignorant about this and so he brazens himself up for the task.

Do not be weighed down by your failures, that’s what it’s meant to do, but do not give it that chance, fight it, stay strong, and emerge even stronger and victoriously.

Surprises sometimes makes you audience or clients thirst for more.

This is because they are confident of something different at all times with the best in it.

In an interview with him, he said, “the Nigerian audience loves it when they don’t see you coming; when they are not able to predict what you’re going to do.

One of the things that the industry has suffered is stereotypes and when people say that ‘they are going to come and do the usual, they’re right”

Being unpredictable doesn’t mean the same as being unfocused.

When you’re unpredictable, though consistent with your style, development becomes inevitable for you.

People ventured into the entertainment industry for diverse reasons, that’s not so important here, but what important now is how you were able to remain relevant at the job.

Make yourself relevant and reliable in dishing your quality content to your audience.

Creativity is the sauce added to life. Where there is not creativity, life becomes uninteresting, boring, and stereotypic.

Where in a world where what sells you out is your creativity. Even businesses and companies, pay for creativity because there is competition around us at all times.

A.Y said, “…when you think of where you’re coming from when you already know that the only thing that can take you back there, is to stop thinking and stop being creative; then your brain will work times two”.

Learn the different arts in your art.

Whatever reason would define the duration of how I want to operate”.

Many people go into the industry without mapping out “the where” and “the when”.

They only know the what, why, and how. The truth is a man starts dying when he stops learning and learning is a continuous thing that operates at any stage of a man’s life.

Not having a clear definition of one’s purpose may also lead to early death literarily.

Know what you want to do, how to get it done, why you want to do it when to start, pause or stop (if necessary) and where to begin.

Work for Passion Not Money

Do you know you can also make your passion your source of income? Passion is not meant to just be something you do at your leisure or something you just want to do for the fun of it.

A.Y started comedy as a passion and now through comedy and every other business he’s ventured into, he’s worth millions of dollars and still counting, one of the richest comedians.

A.Y did not have it all. There is the stage of humble beginning for him as well.

In one of his words, he said, “when you come from a background that was laced with hunger when you’re opportune to get to a place where you now see and enjoy life…”

Humble beginnings are time of sober reflection of oneself and self-actualization.

If you fall into that category, don’t write yourself off, the sun outside is enough to dry any cloth whatsoever.

If you’re born to multitask, by all means, do.

Specializing in one task so as to be best in it is a poor man’s mentality.

All rich men today did not just hover around one business, they make way for every kind of opportunity that sounds great to them.

So is our veteran comedian, A.Y, he tasks himself with more and even today, he still yearns for more. Reach for the sky, and the sky will be yours.

Ayodeji Richard Makun fondly called A.Y is an energetic man who does not lazy around for food to be set on his table.

He goes out to fish out the food and at the same time, soothing man’s spirit with some laughter.

He is the eldest in a family of six, happily married to Mabel, CEO of Midas Interior, and blessed with a daughter, Michelle Makun.