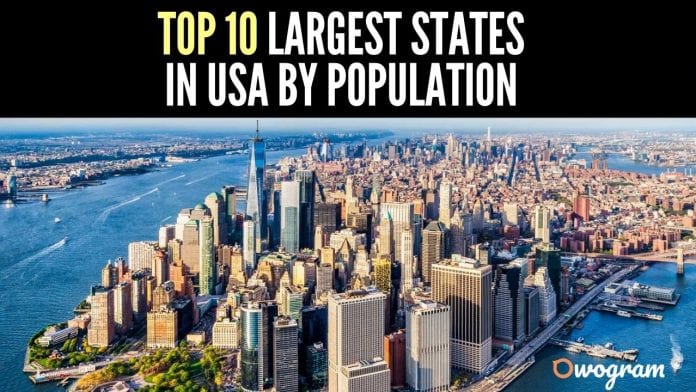 We bring to you the latest list of the top 10 largest states in USA by Population.

Are you contemplating relocating abroad, or you want to go on vacation, and you want to know the which country has the largest states?; United States is the ideal choice.

USA is blessed with beautiful and amazing places to settle in, so if you are considering embarking on the long trip, there are 50 amazing states in the United States to choose from.

The U.S. is a country of 50 states covering a vast swath of North America, with Alaska in the northwest and Hawaii extending the nation’s presence into the Pacific Ocean.

The United States is the third largest country in the world by landmass – nearly as big as the entire continent of Europe.

To make it easier for you, we present you with the 10 largest states in USA according to their population analysis; good luck in your choosing!

10th on the list of largest states in USA by population is Michigan, located in the Midwestern part, surrounded by four  Great Lakes.

It has two isolated peninsulas, making it the only state in United States of America to have two peninsulas.

It has a high population density with a population of 10,045,000 as it takes 3% the country’s population.

If you derive pleasure in yachting or boating, Michigan is the state to be; this is because of the presence of four Great lakes, and a host of smaller lakes. Michigan has a population growth rate of 1.45%

According to the survey carried out by the World population, Michigan houses an average of 174 people per square mile. It has Lansing as its capital, with major cities like; Sterling Heights,  Detroit, Warren, Lansing, Grand Rapids, etc.

Detroit happens to be the most populous city in Michigan, having an estimated population of about 662,000 due to its main economy which focuses on automobile manufacturing; little wonder it is popularly known as The Motor City.

This figures puts Michigan in the list of largest states in USA by population.

Known for its broad landscape, North Carolina covers the Appalachian Mountains, down to the Atlantic Ocean.

It has a thriving economy as well. It is located in the Southeastern part of the state with large urban centers, numerous smaller towns suitable for city life, and also small-town life.

The residents in this city are amicable, easy to talk and simple in nature which makes living in this city easy and comfortable.

North Carolina, as amazing as it is, has a population of 10,611,900. Hence, it takes the 9th position on the list of largest states in USA by population.

It also has a population growth of about 2.20 percent as compared to Michigan.

It houses many cities such as; Charlotte, Wilmington, Chapel Hill, Durham, Cary, Raleigh(which is the capital of North Carolina), etc.

North Carolina has a very high population density, irrespective of the fact that it has a low surface area, averaging 196 people per square mile; quite impressive.

Though historical records had shown that North Carolina was known for its rurality, but a period of 39 years has seen it experience immense urbanization. No surprising it is that we listed it among the largest states in the US.

Georgia is among the ten largest states in USA by population. It has beautiful eye-catching scenarios, like the beaches, rolling mountains; as well as leveled farmlands.

It also has high job opportunities due to the presence of companies in its capital, Atlanta. Georgia is a home of many ancient architectural designs which attracts tourist to the states.

Georgia has a population of  10,736,100 , ranking it 8 among the 10 largest states in U.S. The level of growth in Georgia, as World population survey shows, is increasing at a fast pace.

Georgia is a mother to Atlanta(its capital), Athens, Savannah, and Columbus(where the population is concentrated). It is has become a home for many movie industries today.

In case you are wondering why Ohio is listed among the largest states in USA by population, know that it had produced eight United States presidents in the past; that’s not all, it also grows horse chestnuts or buckeye trees as it is commonly known.

It also has a large surface area, making it the home of large cities and rural settlements.

It has an impressive population of  11,747,700, compared to the previous states mention before. It has a population growth rate of 0.50%.

It has a population density of 282.3 people per square mile, covering the entire Ohio, with a total surface area of 44,825 square miles; making it the 7th largest state in the USA.

Columbus, being its capital, is just one of the major cities in Ohio; others like Akron, Parma, Cleveland, Cincinnati, Youngstown, Dayton, Canton are also in Ohio.

In the Midwestern part of the states, there we find Illinois. It is blessed with productive farmlands, beautiful buildings, skyscrapers etc.

It is also home to a hatful of natural resources like; timber, coal, and petroleum. I am sure you didn’t know that Illinois house the Presidential Library, as well as the museum of the Great Abraham Lincoln.

Its capital is Springfield, and a host of other cities like; Chicago, Aurora, Peoria, Rockford, Naperville, and Joliet. The high population growth of Illinois, explains why it is ranked high among the largest states in the USA.

Pennsylvania ranks 9th among the most densely populated state in the country, with a population density of 284 people per square mile.

Popularly known for its integral role in American history, where the constitution of the country was drafted.

It has become a permanent location for so many companies, thereby providing many job opportunities for her dwellers.

New York, being one of the largest states in the USA, has the most densely populated city in the country.

It is one of the centers for finance, commerce, and culture. One of the most iconic monuments in the state is the Statue of Liberty.

It has Albany as its capital. It has a tremendous population density of 421 people per square mile.

It is the home to a host of other cities like; Buffalo, New York City, Yonkers, Albany, and Syracuse. New York City happens to be the largest city in the state.

Related: 20 Interesting facts about Albany – the capital of New York

Florida is undoubtedly the third largest state in the United States of America.

It’s mild and friendly climate makes it a Place for vacation, it has a population of 21,646,155 with a density of 404, which beats the national average by 4.5 times. Hence, it is the third-largest state in USA by population

It has a growth rate of 1.63%. It’s capital is Tallahassee, while it has more cities ; Tampa, Orlando, Fort Lauderdale.

Florida has become the center for tourism, every year, millions of people visit this great city.

Texas is a home for cowboys and aerospace engineers. It is a place where many job opportunities are available.

Texas has a population density of 105.2 people per square mile on average, though having a very large expanse. Houston, San Antonio, Austin, and Dallas; are the cities found in Texas, Austin being the capital.

Making it to the top of the list, the most populous state, California is currently the most populated state in the US, i.e the largest state in USA by population.

Ask me, and I will tell you to settle for California, it is amazingly endowed with beautiful scenes like; gigantic redwoods, high technological innovation, entertainment industries, and beaches.

It has a mind-blowing population of 39,937,500. Indeed, if California were to be a country, it would have been one of the countries with the sixth-highest economy.

It has a population density of 255 people per square mile, with a growth rate of  0.96%; one could conclude that the population increases every day.

Summary of the Largest States In USA By Population

While there are many populous states in the United States of America, the ones listed here, are the ones to visit if you are looking for a place to move to for vacation.

Each of the states listed here has their uniqueness, they are endowed with beautiful scenes and places to provide comfort and enjoyment to visitors.

Quick summary of the top 10 largest states in the USA:

So if you had a time trying to figure out which state to go to, make your choice from the ones listed above.