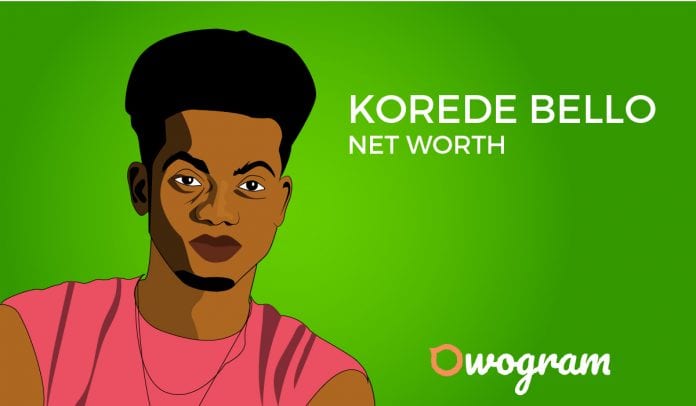 What is Korede Bello net worth?

He signed a record deal with Mavin Records headed by Don Jazzy in 2014.

Bello is best known for his hit single “Godwin”, a semi-gospel and pop song that became a national anthem and topped many music charts across Nigeria.

How interesting it is to learn more about Korede Bello net worth, although he’s not on the list of the top 10 richest Nigerian musicians.

Korede Bello’s Net Worth and Highlights

As of today, Korede bello is worth an estimated $1 million dollars. Below are some of his highlights.

Korede was born in Lagos, Nigeria, where he completed his primary education. His name “Korede” is translated from English and it means “Harvest”.

In his early childhood, he was already showing his interest in music and dancing and any other kind of pubic performing.

He was so into music that he had learned to play the guitar by himself because he was fascinated by its sound and possibilities.

He started performing at the age of 7 and went by the stage name “African Prince”.

After receiving a record deal contract by Don Jazzy to join the crew, he decided to change his name from “African Prince” to his real name “Korede Bello”.

While in primary school, Korede Bello went on to write his first song after forming a music group with a friend.

He studied Mass Communication at the Nigerian Institute of Journalism and holds a higher National Diploma certificate.

Currently, Korede Bello is an Associate Member of the Institute of Information Management.

Korede Bello has been rumored to be dating the Nigerian President’s daughter, but he denied the rumor during an interview with the media saying they are just good friends.

He started music professionally by recording songs in the studio while in secondary school, and eventually released his first single “Forever”.

According to him, his father bought his first guitar for him and even paid for his first studio session.

He loves his parents so much and one of the reasons is because they supported him and would put their money on anything that would make him happy.

He has his role models to be 2Face Idibia and Asa. His genre is soul music.

With an awesome first song, “Forever”, he was filled with much potentials and his manager, Casmir Uwaegbute introduced him to the Mavin boss, Don Jazzy.

He later got into the studio, worked on some songs with Don Jazzy and got him impressed which pushed him into signing Korede into the Supreme Mavin Dynasty.

It was after then that he recorded songs like “African Princess” and “Godwin”. You can download his songs on any of these 10 best Nigerian music websites.

According to him, he draws his inspiration from the likes of 2Face Idibia and of course, Michael Jackson, whom you can most times see him dress like. His music is mostly termed feminine.

He has released his single named “African Princess” which soon showed as a good decision since it became a huge hit in all Africa.

His next single named “Dorobucci” was made by Marvin Records and it became even more known through the entire continent.

“Cold Outside” came out later and confirmed his positioning of a young promising artist in Nigeria.

He is often referred to as African Justin Bieber and his fans are called “Bellovers” which is very similar to Justin Bieber’s Beliebers.

What makes Korede even more different from another young artist in Africa is that he is a huge philanthropist.

He helps many organizations financially but he is also involved in many awareness campaigns, especially charity campaigns.

He is also very religious and often thank God for the good ife he leads, especially with so many children living in bad conditions.

He received his first biggest award in 2014 when he was awarded by the Nigerian Teen Choice Awards in the category of the Most Promising Artist.

He also received a nomination for the best single of the year in 2014 a little after he received the best pop single award. His collaboration with another star Tiwa Savage brought him an award for the best video.

In 2015, he gained a great business opportunity and received an endorsement deal with GLO Telecom Company which had a great rise on Korede Bello net worth.

In 2016, he has become a winner of an important award titled City People Entertainment Award in the Category of Pop Artist of the Year.

In 2018, he released eight songs which is quite a high number – “Together”, “Bless Me”, and so on, but none of these songs managed to become as big a hit as “Godwin”. Only his single “Together” received more attention.

Korede took a break from chasing his music career and entered the study of journalism and managed to get his degree from the Nigerian Journalism Institute where he gained his HND – Higher National Diploma. He finished his studies in 2017.

Adding to Korede Bello’s net worth, he has been pictured with a good number of cars which all worth fortunes. One of it is Chevrolet Corvette 2017 model which worth N30 million.

In one of Korede Bello’s quotes, he said; “Be happy in the moment, that’s enough. Each moment is all we need, not more”.

Here are some lessons from Korede Bello.

According to Korede Bello, his style of music is called “sweet music”, not R&B, not hip-hop; he does “sweet music”.

The content of the message also defines the type of music. Whether it preaches love and peace, music is an expression and the message in your expression is all that matters.

Some challenges occur to be a blessing. He said: “I encountered many but I’m very thankful to God that every one of them has been a lesson that is even helping me now, especially on a bigger platform”.

It is an opportunity to prepare you going further and doing exploits.

Never get satisfied with your achievement, there is room to always get better day after day.

Korede Bello, after his achievement in the music industry, never stopped there. He still went further in his education to study Mass Communication. Now, he is an Associate Member of the Institute of Information Management.

Summary of Korede Bello Net Worth

Korede Bello is indeed one of the fast-rising artists in Nigeria who knows what he wants and will continue to get better day after day.

About your favorite pop singer, Korede Bello net worth has been achieved through hard work and consistency. So, tell us what you think.