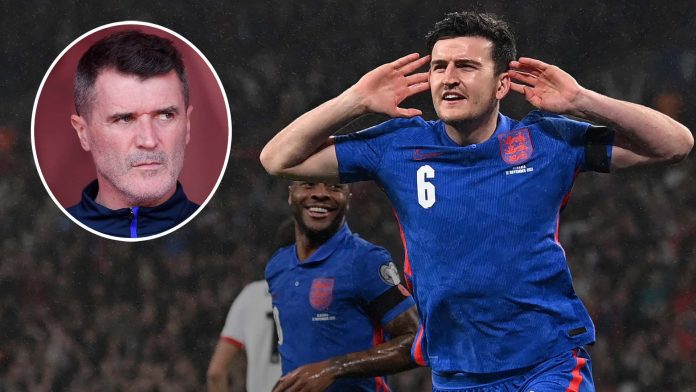 The England defender cupped his ears in an apparent call out to his critics, but the former Man Utd star was not impressed

Roy Keane has labeled Harry Maguire “embarrassing” for the way the defender celebrated his goal for England on Friday.

Maguire opened the scoring for the Three Lions in the World Cup qualifying match against Albania at Wembley and celebrated by putting his hands to his ears, in what was seemingly a message to those who have criticized his recent form.

But Keane was not happy with the center-back’s antics, saying his goal was not enough to compensate for his poor performances at club level.

What has been said?

Speaking on ITV Sport at half-time, ex-United star Keane said: “He thinks he’s shutting the critics up. But I think It’s embarrassing.

“He’s been a disgrace the last couple of months for Man Utd. He thinks if he scores there, he’s going to shut his critics up. Embarrassing.”

“The celebration was a knee slide, it just came naturally to me,” the defender told Sky Sports.

“It’s an amazing feeling to score for my country. It wasn’t directed at anyone, it just came naturally to do that and open the scoring for England and get the important three points.”

Harry Kane had an excellent first-half for Gareth Southgate’s side, scoring three times as they dominated against Albania.

But the striker has not been at his best at club level, having scored just once in 10 Premier League matches for Tottenham.

Kane admitted earlier in the week that his aborted transfer to Manchester City had taken a toll on him, but Keane fired back by saying the striker should be “used to disappointment” from playing for Spurs.

“He’s got to liven up. He’s got to look at himself and say, ‘Listen, get over this disappointment,’” Keane said ahead of kick-off.

“Listen, he plays for Spurs, he should be used to disappointment.

“Get back to the basics. Get hold of the ball. Show some strong leadership skills. No more excuses.”