Home The Watch Juneau, the Capital of Alaska- 20 Interesting Facts. 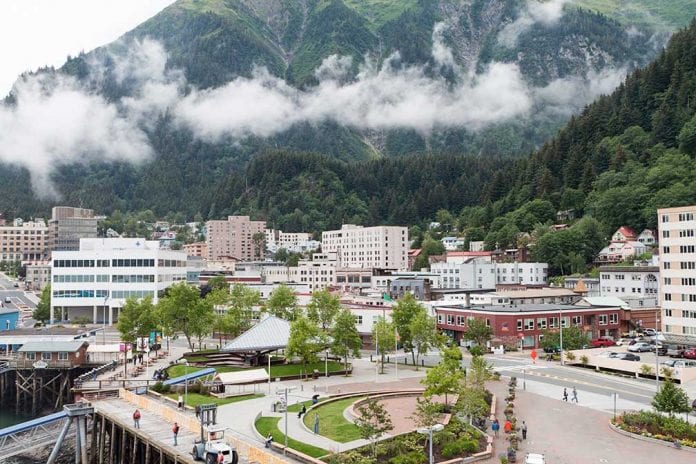 Juneau is the present capital city of Alaska State and it belongs to the borough of Juneau.

Juneau city was named after a Canadian gold miner called Joe Juneau who did a great job in finding out gold sites and Ice-Fields in Juneau.

Juneau has a population of about 31,453 people. Juneau is located between the Gastineau Channel and the Alaskan Pan Handle.

The city of Juneau is the second most populous city in Alaska after Anchorage. One spectacular thing about Juneau is that, its streets does not connect to any of the neighboring cities which implies that, to go in and out of Juneau, the only possible means is either by air or by sea.

The reason why most Canadian cities are among the nearest cities to Juneau is that Juneau shares a border with the Canadian Province of British Columbia.

Juneau is regarded as the only United States capital to share its borders with another country. It shares a border with the Canadian Province of British Columbia.

About a million people visits Juneau city every summer for Tourism.

Related: All the 50 states and capital in the USA

You can’t drive to Juneau city by road because there are no roads connecting Juneau with other cities. The best option is to get into a ferry to arrive at Juneau by sea.

The nearest mountain to Juneau has a giant Ice-Field which has about 30 glacier flow and the Mendenhall Glacier is the most popular of them all.

Juneau is regarded as the United States most wired capital.

Juneau was formerly called Harrisburg before it was changed to Juneau in 1881.

Did you know that Juneau is one of the best places to settle for the midnight sun in the United States?

The longest day of the year in Juneau occurs on June 21 which displays 18hours and 18 minutes of complete daylight.

Juneau city is a metropolitan area as well.

Juneau is the second most populous city in Alaska State after Anchorage.

The Mendenhall Glacier covers about 1,500 miles from Juneau to the Canadian border.

Juneau is well distinguished for its beautiful Ice-fields and its gold.

There are 5 species of Salmon and 3 species of Whales in Juneau. Not only that, it also has about 280 species of birds and two kinds of bears.

Juneau city is larger than the whole of Delaware State in the United States.

Movements in and out of Juneau is only possible through air and sea.

The people of Juneau celebrate Independence Day as a national holiday every 4th of July.

20 Interesting facts about Boston – the capital of Massachusetts