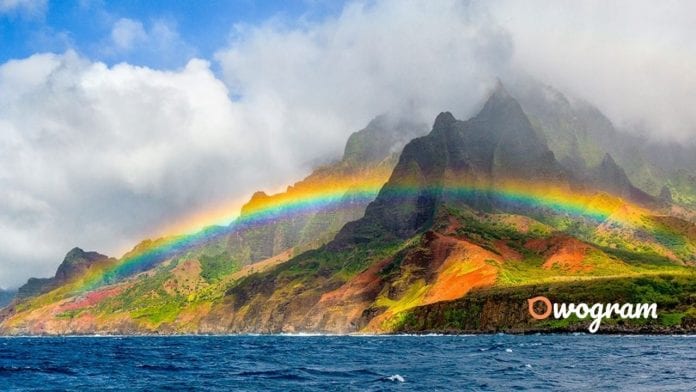 Hawaii State is one of the 50 states of the USA, sitting at number eleven on the list of all US States in alphabetical order and it is a popular place people visit for vacations.

Hawaii is the 40th most populous state in the United States and by area size, it takes on the 43rd position among other states in the USA.

Hawaii State was the last state to be admitted into the Union of the United States on the 21st of August, 1959.

Hawaii is located in the southwest region of the U.S along the Pacific Ocean. The total area size of Hawaii is 28.311km2 and about 4,507 square miles is regarded as its water area size.

Hawaii has different nicknames and they are; the paradise of the Pacific, the 808 state, the Islands of Aloha, the Aloha state, and few others.

Surfing is the main sport of the people of Hawaii and not only that, Hawaii involves in the production of cane for sugar, pineapples, coffees, macadamia nuts, and other aspects of agricultural production.

Hawaii is one of the top beautiful states in the United States as it is a natural island that is beautiful enough for the world to figure out.

The top let side of Hawaii’s flag is similar to the Union Jack of Great Britain because the majority of the King’s advisors were British and Hawaii was under the protection of England during that time.

Check out: The Top 10 Auto Insurance Companies in USA

Land Area and Map of Hawaii

Hawaii is one of the most naturally beautiful states in the USA.

Hawaii is ranked the 40th most populated state with a population of about 1,415,872.

The traditional name of the people of Hawaii is basically the Konaki Maoli or the Hawaii Maoli.

About 800 years ago, it was the Polynesians that firstly arrived in Hawaii and not long after, the Tahitians inhabited the area, which extended the settlement on the Island.

Through all that, Polynesian and the Tahitian customs, religions and languages became communal among the people of Hawaii.

As time went on, the Japanese, Filipinos, Chinese, Koreans settled in Hawaii and that made way for the development of Hawaii and extending its customs and traditions.

In 1900, Hawaii was made a territory of the USA and its first governor was Dole.

There are only two main official and common languages among the people of Hawaii and they are Hawaiian and English.

Hawaii is more of a natural island and that makes it possible for it to be well inhabited with various kinds of animals.

Related: Connecticut state – all you need to know

Did you know that Hawaiian Islands are the most geographically Isolated Islands in the world?

If you really want to know more about Hawaii, check out more of interesting facts about Hawaii below.

5 Most Popular Cities In Hawaii State

Honolulu is the most populous city in Hawaii with a population of about 348,985 people.

Honolulu is the capital city of Hawaii and it is also the largest city in Hawaii State.

Honolulu is located along the Pacific Ocean and it is described as one of the westernmost and the southernmost city in the USA.

Honolulu belongs to the county of Honolulu and it has different nicknames like the big pineapple, paradise, crossroads of the Pacific, sheltered bay, and so on.

Honolulu is the 55th most populous city in the USA.

East Honolulu is described as Census-designated place (CDP) located in the county of Honolulu, Hawaii.

It is the second most populous city in Hawaii State with a population amounting to about 47,540 residents.

East Honolulu has a total land area of about 3.5 square miles amounting to about 8.9 km2 and the water area is of 1.2 square miles.

The third most populous city in Hawaii is Pearl City and it has a total population of about 45,605 people.

Pearl City is located in the “Ewa District” on the Island of O’ahu.

Pearl City belongs to the county of Honolulu and it has a total area of 5.8 square miles amounting to about 15.0km2 and a water area of 2.1km2.

Hilo is located in the district of south Hilo and has an elevation of 59ft.

Hilo is the fourth most populous city Hawaii State and it has a population of 45,056 people.

Hilo has a total area of 58.3 square miles amounting to 151.0 km2 and it belongs to the county of Hawaii.

The fifth most populous city in Hawaii is the Kailua city with a population of about 38, 635 people.

Kailua belongs to the county of Honolulu and it is located in the Ko’olaupoko District of the Island of O’ahu.

Kailua city has a total area of 10.6 square miles which amounts to about 27.4km2 and 2.8 square miles is the water area.

Hawaii is the last state to join the Union of the United States and having it lucky enough to be part of the USA is really a good thing.

Hawaii is a beautiful state most people visit yearly to enjoy their vacations with family and friends because it is a natural island which best suit human’s love for relaxation or nature enjoyment.

What do you have to say concerning this post about Hawaii? Use the comment box below as any of your contributions and questions would be entertained.