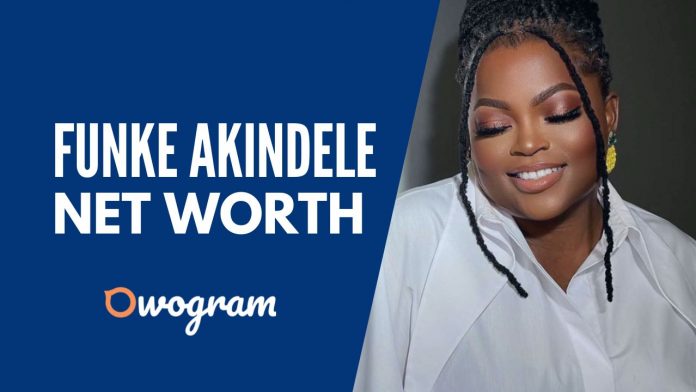 What is Funke Akindele net worth today?

Funke Akindele is a Nigerian actress, film producer, screenwriter, and entrepreneur. Funke Akindele starred in the sitcom I Need to Know from 1998 to 2002, and in 2009

She is popularly known as ‘Jenifa’, a character she played in a movie titled Jenifa. Funke Akindele has carved out a niche for herself in the Nigerian entertainment industry with the way she fondly interprets her role.

Funke won the Africa Movie Academy Award for Best Actress in a Leading Role. Funke Akindele plays the lead character in the show Jenifa’s Diary, for which she was named Best Actress in a Comedy at the 2016 Africa Magic Viewers Choice Awards.

This actress has gone through the thick and thin paths of life. Currently, she is among the top 10 richest actresses in Nigeria.

Funke Akindele Net Worth and Highlights

Funke Akindele net worth is currently $7.6 million. She makes a lot of money from her passion for acting. Now, she has become involved in the list of most famous film actresses in the film industry.

She has multiple endorsement deals such as being an Ambassador to Irokotv. In 2018, she was signed as a brand ambassador for Keystone Bank.

In November 2019, she signed an endorsement deal with Waw Nigeria, a company that manufactures detergent and bar soaps. However, It can not be disputed that she spent part of her money on luxury

Funke Akindele is one of the best and richest actresses in Nigeria. Therefore, it should not come as a surprise that she has been nominated for several awards and, so far, she has won a good number of them.

Below is a list of awards she has been nominated for and those she has won.

Awards won so far include:

Related: Simi net worth and biography

Funke Akindele was born on August 24, 1977, in Ikorodu, Lagos State, Nigeria. Funke Akindele is the second of three children (two girls and one boy). Funke Akindele’s mother is a medical doctor while her father is a retired school principal.

Jenifa decided to pursue a career in acting even though she is a trained lawyer. One of her first movies was Naked Wire where she acted as a waitress.

Her journey to stardom began when she played the role of a curious but brilliant secondary school student in a popular TV series, I Need to Know which aired from 1998 -2002.

I Need to Know  is a United Nations Population Fund sponsored Sitcom program  created to enlighten the public on the issues teenagers face while growing up.

Funke has featured, written and produced many Nollywood movies especially Yoruba movies and has many hit movies to her name.

Funke Akindele got her major breakthrough when she played the main character in a comedy-drama movie, Jenifa  where she acted as a ‘local girl’ from the village who went to Lagos for a ‘better’ life.

The movie was not just entertaining and hilarious but a massive success which she did well to harness the potential.

Which school did Funke Akindele attend?

Who is the mother of Funke Akindele?

The mother of Funke Akindele is Dr Adebanjo Akindele. She is a medical doctor.

Who is the father of Funke Akindele?

The father of Funke Akindele is the late Mr Olusoji Akindele. He was a teacher, a retired school principal. Mr Akindele died in 2019.

How long has Funke Akindele acted?

Funke Akindele started her acting career in 1998 at the age of 21, starring as “Bisi” in the United Nations Population Fund-sponsored sitcom” I Need to Know”. She starred in the sitcom from 1998 to 2002, playing the role of a curious but smart secondary school girl.

Who is the first husband of Funke Akindele?

Funke Akindele’s first and former husband is Adeola Kehinde Oloyede, a politician who resides in Oshodi, Lagos. The couple got married On May 26, 2012,  but later, the duo divorced in July 2013 attributed to some misunderstandings

Where is Funke Akindele home town?

Who is the current husband of Funke Akindele?

The Husband of Funke Akindele is Abdulrasheed Bello popularly as JJC Skills. They got married in May 2016 in London.

Remember what you have been thanked for

We do numerous deeds in our lifetime. For a few, we are thanked, and for others, we are not. Try to find out the various things you were thanked for in the past.

How did it make you feel? If you felt good, then try to recollect if doing a similar errand at a later stage also leads to getting “thanks” from someone. When you are thanked for something regularly, you are good at it, which could be your hidden talent.

It’s not news that Funke Akindele is multi-talented. Asides from being an actress and producer, she is also a lawyer, journalist, and dancer.

She is what you call a ‘Jack of All Trades’ and ‘Master of All’ and she embodies all these professions in her daily life from time to time. If God has blessed you with multiple gifts and talents, it’s time to deploy them and show the world how gifted you are.

Be consistent and hardworking

One thing that has been constant with Funke is her consistency and hard work. From her days of ‘I Need To Know’ in the late ’90s to her blockbuster movie, ‘Jenifa’ in 2008 which was the game changer for her career, and now to ‘Omo Ghetto’ being the highest-grossing Nollywood ever, all we can see is consistency

That’s it on Funke Akindele net worth. There are times in our lives when we feel discouraged and low. The situation worsens if there is no one else to uplift our morale.

During such times, you need to remember that you are blessed with immense talents, and once you recognize these, you will be able to get back on the driving seat again. What did you think?