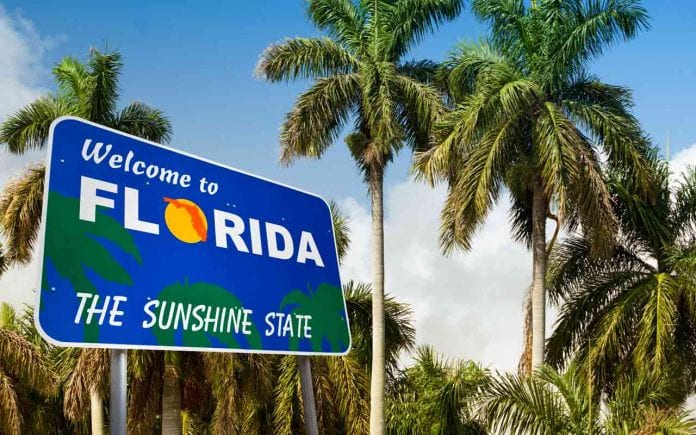 We bring to you some interesting things about Florida state in the U.S.

Florida was the 27th state to join the Union of the United States and that was on March 3, 1845.

Florida is located in the Southeastern part of the United States and also found close to the Atlantic and the Gulf of Mexico.

The most popular nickname Florida has is called the Sunshine Shine state and it was accepted as its official nickname by the 1970 legislature. It is no doubt one of the US states in alphabetical order.

The Capital city of Florida State is Tallahassee and it was adopted as Florida’s capital in the year 1824.

The name Florida is from a Spanish word called Floridus which means “Flowery” and Florida can be described as the land of Flowers.

Would you also like to Know about Texas state?

The Flag of Florida is similar in shape to that of the Alabama State Flag and Scotland’s flag which represents the St. Andrews’s Cross.

The differences are just the colors and that the flag of Florida has the state seal at the center.

The flag of Florida consists of the Shape of St. Andrews’s cross with a red satire on a white background and has the state seal at the middle or center of the flag.

Florida State Flag was created on 6th of May, 1868 and it was firstly introduced with the state seal without the red bars.

In 1900 and 1985, the cross-like bars were added as modifications to the state flag of Florida and it is being till date.

Check out: The Top 10 largest states in USA by population

Florida State is one of the southernmost states of USA. Florida is located in the Southeastern region of the United States and it is closer to the Gulf of Mexico and the Atlantic Ocean.

The Hispanic and Black people are the largest ethnic groups in Florida. Some of the other ethnicities are Pacific Islanders, Alaska Natives, Seminole, native Hawaiians, Cuban Americans, Haitian Americans, Dominicans, Non-Hispanics Whites and more.

Florida is the third most populous state in the United States with over 21,477,737 people from its ethnicities and residents.

The Calusa Indians were the first inhabitants of Florida about 12,000 years ago before it got under the colonial rule by the Spanish and Great Britain.

All these ethnicities and settlers put together makes it possible for about 128 languages to strive through in Florida.

The most common of them all is the English language and other languages like Spanish, French and Portuguese are prominent.

There are a lot of different natural habitats in Florida like the insects, birds, mammals, reptiles, aquatic animals and so on.

Did you know that Florida was the first U.S. state to be settled by Europeans? This isn’t the only fact I have for you, check out 5 more interesting facts about Florida below.

5 Most Popular Cities In Florida

Florida state consists of about 282 cities out of the 411 cities and towns.

Below is a list of the 5 most popular cities in Florida out of its 282 cities, and each of them would be determined by their level of population.

Jacksonville is located at the banks of St. John’s River in the First Coast Region of Northeast Florida.

Jacksonville has a total area of 874.67 square miles amounting to about 2,265.39 km2. Jacksonville belongs to Duval County and it is popular for two nicknames “Jax” and “J-Ville”.

Miami is located in the Southeastern area of Florida, United States.

Miami has a total population of 486,388 people and that makes it the 2nd most populous city in Florida State.

Miami is known for 3 popular nicknames and they are; the Magic City, the Gateway to the Americans and the Capital of Latin America. Miami belongs to Miami-Dade County.

Tampa is the 3rd most populous city in Florida State with a population of about 413,704 people.

Tampa city is located along Florida’s Gulf Coast, particularly on Tampa Bay. Tampa Belongs to the County of Hillsborough.

Tampa is well known for two nicknames which are the Cigar city and the Big Guava.

Orlando is a city in Florida State which is located in the Central area of Florida.

Orlando has a population of about 291,739 people and that makes it the 4th most populous city in Florida State.

Orlando city belongs to the Orange County and it is popularly for its nickname, the Theme Park Capital of the World.

St. Petersburg is the 5th most populous city in Florida State with a population of about 271,842 people.

St. Petersburg is situated on Florida’s Gulf Coast and it belongs to the Pinellas County.

There are two nicknames for St. Petersburg city namely; Florida’s sunshine city and St. Pete. Florida’s Sunshine city is its most popular nickname.

Related: All you need to know about Georgia state

Florida is one of the most beautiful States in USA and it is well known for its various beautiful flowers.

This state is the 22nd largest state by area in USA and as the same time blessed with enough population to make it the third most populous state in the United States.

Not only that, Florida is blessed with beautiful beaches, especially the popular Miami Beach which is dream beach to visit by almost everyone who knows about it.

Have you also heard of “The World Disney Resort”? Florida is home to it and you might want to visit it because it is regarded as the happiest place on earth.

What do you think of this post? Kindly use the comment box below to reach out to us on anything you have to say concerning this post.

IrokoBet Site Review – Why You Should Bet With Iroko Bet